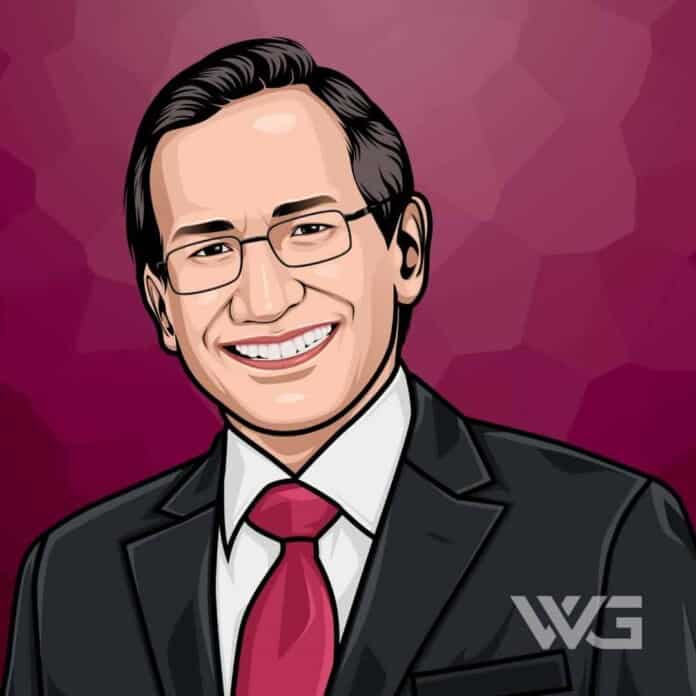 What is Rick Santelli’s net worth?

Rick Santelli is an editor for the CNBC Business News network.

Santelli joined CNBC as an on-air editor in 1999, reporting primarily from the floor of the Chicago Board of Trade. He was the vice president for an institutional trading and hedge fund account for futures-related products.

Santelli was born near Taylor Street in  Chicago’s old Italian neighborhood and moved with his family to Lombard, Illinois at age six.

After Santelli graduated from Willowbrook High School, he attended the University of Illinois at Urbana – Champaign, where he was a member of the Alpha Sigma Phi fraternity. He graduated with a Bachelor of Science in economics in 1979.

Santelli’s first job was to keep customer orders, mostly entered on paper via Telex machines arranged according to price and to interface with customers.

After graduation, Santelli joined the Chicago Mercantile Exchange and the Chicago Board of Trade as a commodity trader and order filler for Drexel Burnham Lambert; he eventually became the Vice President of Interest Rate Futures and Options.

In the 1990s, he felt that the financial industry was changing in a way “not beneficial to me and my family,” and accepted a full-time job with CNBC in 1999.

Santelli drew attention for his remarks made about the Homeowners Affordability and Stability Plan in 2009. While broadcasting from the floor of the Chicago Mercantile Exchange, Santelli accused the government of “promoting bad behavior” and raised the possibility of a “Chicago Tea Party”.

Santelli suggested that individuals who knowingly obtained high-risk mortgages. The Tea Party remark was credited by some as “igniting” the Tea Party movement as a national phenomenon.

How Does Rick Santelli Spend His Money?

Rick Santelli spends some of his money on real estate.

Santelli owns a beautiful home in Wayne. It comes with five bedrooms, and he purchased it for $730,000 thousand.

Here are some of the best highlights of Rick Santelli’s career:

“Look at the Weimar Republic and their hyperinflation in the early ’20s. It didn’t happen overnight. I’ve used the analogy. It’s a lot like soybeans: you plant ’em, you wait. Conditions take some time. You need some sun; you need some water, but ultimately things start to grow, and are we in that phase or not?” – Rick Santelli

“We have mountain of debt that isn’t going away and all the problems are here to stay, and anybody who tells you that is a good thing ought to get out of the business of helping the government down the road.” – Rick Santelli

“Many of us, of course, have children, and I think that the type of country that we are going to leave in our wake by rewarding bad behavior… is not a better handoff to the next generation and generation after that.” – Rick Santelli

“All the way back to 2010, the takeover of Congress, there is an unnerved part of the public that understands the history of Hillary Clinton. We’ve seen her for decades. They understand Donald Trump. There’s no disclosure needed there. The sour grapes that we are experiencing aren’t going to make a better-tasting wine for the Democrats in the future.” – Rick Santelli

“One of the greatest technicians of all time was a man named W. D. Gann. He had tremendous success predicting market moves much in advance. Legend has it that he occasionally sent notes to ‘The Wall Street Journal’, which accurately predicted tops and bottoms in grain markets months ahead of time.” – Rick Santelli

“Well, right off the bat and believe me, I just finished reading it’s not only that plan—kind of what floor traders and I have dubbed the group refi plan—but there’s also the FHFA, the Federal Housing Finance Agency.” – Rick Santelli

View our larger collection of the best Rick Santelli quotes!

Now that you know all about Rick Santelli’s net worth and how he achieved success; let’s take a look at some of the lessons we can learn from him:

In normal times, investors should pay more attention to the credit markets because it’s the energy by which everything is driven. It’s the oil in the engine.

You need more people to perpetuate a myth because if the people stop the myth is known to all.

How much is Rick Santelli worth?

Rick Santelli’s net worth is estimated to be $8 Million.

How old is Rick Santelli?

How tall is Rick Santelli?

Santelli was born in Chicago, Illinois. Santelli is an editor for the CNBC Business News Network. He is best known for helping create the Tea Party movement.

He graduated from the University of Illinois at Urbana-Champaign. Santelli was mentored by RJ Abrams and learned about futures trading, customer relations, and foreign exchange. He joined CNBC in 1999.

What do you think about Rick Santelli’s net worth? Leave a comment below.