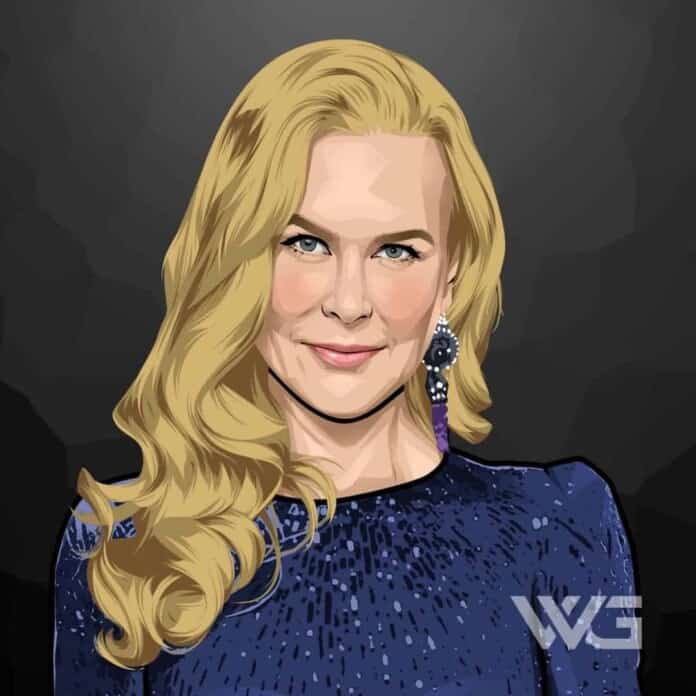 What is Nicole Kidman’s net worth?

As of December 2022, Nicole Kidman’s net worth is estimated to be roughly $250 Million.

Nicole Mary Kidman is an Australian actress and producer from Honolulu. Kidman is the recipient of multiple awards including an Academy Award, two Primetime Emmy Awards, and five Golden Globe Awards.

She is mostly known for her performance in ‘Days of Thunder’, ‘Far and Away’, ‘Batman Forever’, Eyes Wide Shut’ and ‘Moulin Rouge!’.

Nicole Mary Kidman was born in Honolulu, Hawaii on the 20th of June, 1967.

Her father, Anthony Kidman was a biochemist, psychologist, and author who died of a heart attack in Singapore when he was 75 years old. Her mother Janelle Ann, is a nursing instructor. Kidman’s ancestry is of Irish, Scottish and English heritage.

Kidman attended Lane Cove Public School and North Sydney Girl’s High School. She enrolled in ballet at three and showed her natural talent for acting in her high school years.

Kidman had her debut in the film industry when she starred in ‘Bush Christmas’ in 1983. Thereafter, she starred in several films including ‘BMX Bandits’, ‘Watch the Shadows Dance’ and ‘Windrider’. She was also seen in various television series, such as ‘Five Mile Creek’ and ‘A Country Practise’.

In 1989, Kidman starred in ‘Dead Calm’ which brought her international fame and recognition. Since then, there was no looking back for this talented actress. ‘Days of Thunder’ was Kidman’s big ticket to success in Hollywood, and the film was also the highest-grossing film of the year.

Kidman started to enjoy the deserved career success, and she did not lose focus. She gave more incredible performances in films like ‘Flirting, ‘Billy Bathgate’, ‘Far and Away’ and ‘My Life’.

The year 1995, was a super successful year for Kidman. She bagged the lead roles for the movies ‘Batman Forever’ and ‘To Die For’.

She later won her first Golden Globe award and her films were doing great in the box office. This was the breakthrough in Kidman’s career as an actress and she was receiving much popular and critical acclaim.

Since then, Kidman has featured in multiple movies and has made a name for herself in the movie industry. In Stephen Daldry’s film ‘The hours’ she played the character with much conviction and excellence that she was bestowed with an Oscar, Golden Globe and BAFTA award.

Here are some of the best highlights of Nicole Kidman’s career:

“Sometimes your mistakes are you biggest virtues. Those things that you think are the worst thing that’s happening to you can somehow turn around and be the greatest opportunity.” – Nicole Kidman

“Have no regrets. Every relationship leads you to where you’re meant to be. Learn to be comfortable with being alone. Learn to be comfortable with saying no to people; we put everybody else before ourselves. Read great literature; don’t get all your information from TV. Define your moral code – nobody else is going to give you that. Find it yourself. Keep asking questions, keep challenging. You don’t have to conform. Rebellion creates the character. And, as my mother always said to me, “Don’t let anyone break your spirit!” – Nicole Kidman

“Part of our job as human beings is to share our knowledge and share the things we’ve learned. So we can either save people from making the same mistakes or give them hope.” – Nicole Kidman

“I suppose that’s what I’ve learned recently, to allow myself to be loved.” – Nicole Kidman

How much is Nicole Kidman worth?

Nicole Kidman’s net worth is estimated to be $250 Million.

How old is Nicole Kidman?

How tall is Nicole Kidman?

Nicole Kidman is a very fine actress, in fact, she is one of the highest-paid performers worldwide. Throughout her career, she has been nominated many times for different awards. Her net worth according to the most recent is estimated to be huge.

What do you think about Nicole Kidman’s net worth? Leave a comment below.