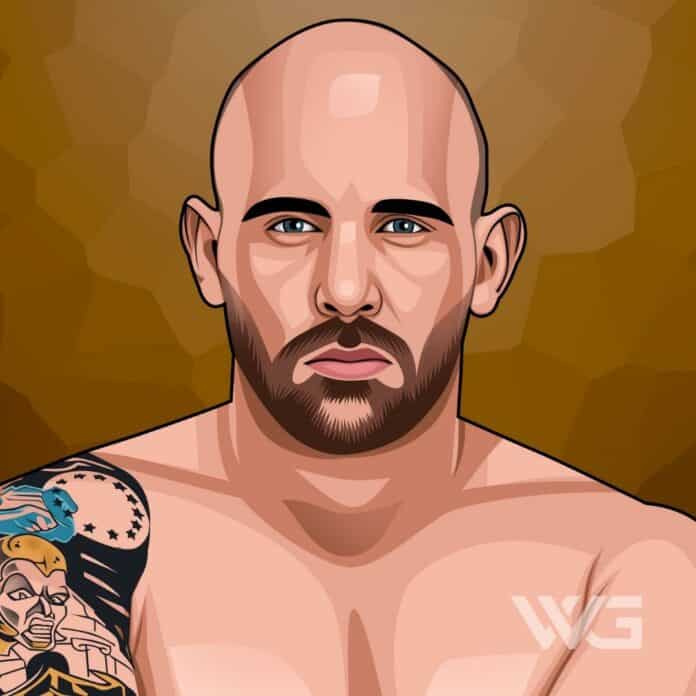 What is Shane Carwin’s net worth?

Shane Carwin is an American mixed martial artist who competed in the Ultimate Fighting Championship where he won the heavyweight division title.

Prior to joining the UFC, Carwin was part of ROF, World Extreme Cagefighting, and more.

As of January 2023, Shane Carwin’s net worth is estimated to be $4 Million.

Shane Bannister Carwin was born January 4, 1975 in Greeley, Colorado and attended the Colorado School of Mines and Western State College.

Carwin excelled as both a wrestler and football player in college, but went into engineering with his college degree after leaving Western State College.

He started to train in Brazilian Jiu-Jitsu and achieved the rank of purple belt, and began his amateur career while still working in engineering.

After being a three-time All-American in wrestling, Carwin made his professional MMA debut with a first round technical knockout victory over Carlton Jones with World Extreme Cagefighting.

Shane Carwin would go on to win many more matches in a row, beating the likes of Justice Smith, Chris Guillen, and Rick Slaton.

Carwin earned his first title shot in 2007 at ROF 31: Undisputed and defeated Sherman Pendergarst for the ROF Heavyweight Championship.

His next match would be his UFC debut, and he knocked out Christian Wellisch to run his record to a perfect 9-0.

Because of his record, Carwin was considered among the likes of Fedor Emelianenko, Stipe Miocic, and Antonio Rodrigo Nogueira in terms of all-time great heavyweights.

Over his final two matches, Carwin lost via submission and decision to Brock Lesnar and Junior dos Santos, respectively, ending his career at 12-2.

Shane Carwin only had a short run in the UFC, but he was still able to make quite a bit of money as he headlined one of the most anticipated pay-per-views against Brock Lesnar.

There were times when Carwin made just five-figures for his fights, but over the course of his UFC career, Carwin said that he made over $2 million.

Carwin was able to get his biggest paydays against Lesnar and Junior dos Santos, but lost out on the bonuses that he could have made for winning.

Still, winning the UFC Heavyweight Championship was lucrative and the Knockout of the Night bonus earned him even more.

When taking his payouts and endorsements into consideration, it’s estimated that Shane Carwin’s net worth is $2.5 million.

Shane Carwin is currently believed to be single, but has been married twice, including to Lani, whom he met in Colorado.

Along the way, Carwin has had two children with a son named Kamden and a daughter named Alexia who was born in 2010.

He is the youngest of his family, growing up with two brothers who Carwin credits for pushing him into training for mixed martial arts.

Shane Carwin began collecting awards in sports outside of mixed martial arts as a teen and never looked back.

At the top of his career, Carwin was the best in the UFC heavyweight division, even if for a brief period of time.

Here are some of the awards and achievements from Shane Carwin’s wrestling and fighting careers:

Carwin was able to do more in a dozen professional fights than more fighters can in a lifetime.

From battling some of the biggest names in mixed martial arts to become a title holder, Carwin had a full career.

How Does Shane Carwin Spend His Money?

Shane Carwin made a solid amount of money during his UFC career but doesn’t find himself among the richest MMA fighters in the world due to a short career.

In 2016, Carwin opened up his own athlete management agency called the EPU (E Pluribus Unum) Collective after seeing a lot of opportunity.

For the most part, though, Carwin has been saving his money as neck surgery and other back and neck pain procedures have added up.

Shane Carwin has reached milestones for most of his life, dating back to his days as a college athlete in wrestling and football.

In another life, he may have been one of the richest NFL players in the world or even gotten into professional wrestling.

As a professional mixed martial artist, Carwin had some memorable moments that will last forever, including title wins.

Here are some of the best highlights of Shane Carwin’s career:

Though his career has been finished for over a decade now, Carwin is still making memories as a manager and is still a staple of MMA.

Like Ben Askren, Carwin’s resume is short, but extremely impressive as he was able to win a title and amass a 12-0 record before leaving due to neck surgery.

Shane Carwin has always been open about his career, including his relationship with Dana White and the UFC.

He has had interviews with Joe Rogan, media outlets like Sports Illustrated, ESPN, and more, spilling the details of his career.

Here are our favorite quotes from Shane Carwin:

Shane Carwin didn’t need to stick around with the UFC for a long time to prove that he was one of the best.

He battled guys like Frank Mir and Brock Lesnar, proving that he belonged in the heavyweight division with some of the biggest names.

Carwin joined the likes of Francis Ngannou and Daniel Cormier as the greatest heavyweight fighters of his generation.

Now that you know all about Shane Carwin’s net worth, much can be learned from the former UFC interim Heavyweight Champion.

Here are some of the best success lessons to learn from Shane Carwin:

1. Take Care Of Your Body

The reason why Shane Carwin wrapped up his career was because he started to feel neck pain that led to surgery.

Carwin could have ignored doctors and gotten back into the octagon, but wanted to be healthy and put his body first.

He’s still not at 100 percent in terms of health, but he’s doing much better than in his late career and is able to care for his children.

Shane Carwin was able to manage having a full-time job as an engineer early in his career while training in mixed martial arts.

Though the amount of free time that he got was extremely limited, Carwin knew it would be worth it so he could live out his dream.

The end result was Carwin making enough money to quit his engineering job and focus on MMA on a full-time basis.

Everyone that has worked with Shane Carwin is quick to point out how soft-spoken and humble he can be.

That can get you a long way in life as people tend to gravitate toward that type of personality and offer more advancement opportunities.

Carwin is a respectful man in the octagon and on the streets, which is another reason why he became a fan favorite during his career.

Shane Carwin wasn’t around for very long in the UFC and as a professional fighter overall, but did reach the pinnacle of the sport.

He was able to win the UFC Heavyweight Championship and got to compete against the likes of Frank Mir and Brock Lesnar.

Along the way, Carwin made a lot of money during his stint in the UFC and has been able to enjoy retirement for more than a decade.

As of January 2023, Shane Carwin’s net worth is estimated to be $4 Million.

What do you think about Shane Carwin’s net worth? Leave a comment below.