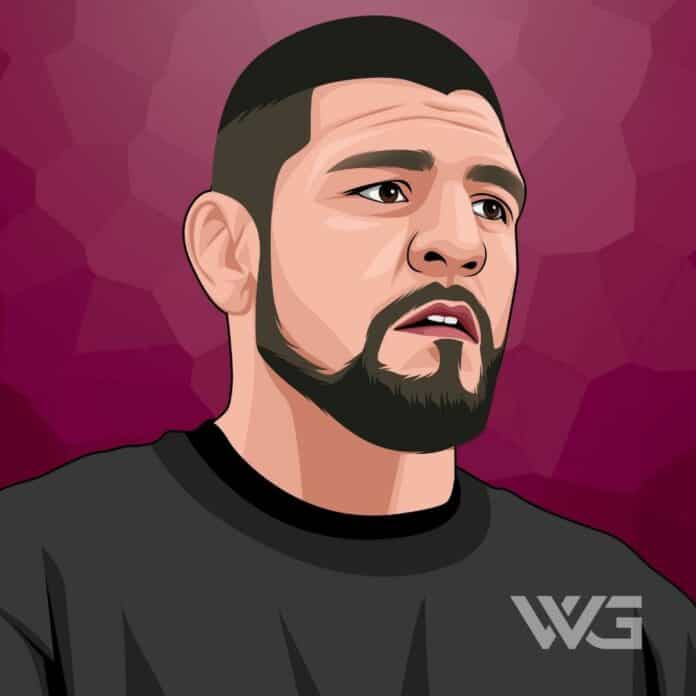 What is Nick Diaz’s net worth?

Nick Diaz is an American mixed martial artist who was previously a welterweight champion with several different promotions.

Prior to making his UFC debut, Diaz fought for PRIDE, Strikeforce, and EliteXC among others.

Diaz and his brother Nate were more interested in fighting, and he began to study mixed martial arts including Sambo and Brazilian Jiu-Jitsu.

By the time he was 18, Diaz was fully prepared to become a fighter and joined the professional ranks less than one month after his birthday at IFC Warriors Challenge 15.

Diaz began his professional career 5-2, with his losses coming to Jeremy Jackson and Kuniyoshi Hironaka.

In 2003, Diaz got a chance to fight for Dana White and the UFC after he became the WEC Welterweight Champion over Joe Hurley.

Diaz got a third match against Jeremy Jackson and won for the second time, then went on to defeat Robbie Lawler at UFC 44.

Throughout his UFC career, Diaz would go against the likes of Gleison Tibau and Josh Neer before fighting with several other promotions including Strikeforce, where he was a two-time champion.

In 2011, Diaz returned to the UFC and had matches against BJ Penn, Georges St. Pierre, and Anderson Silva, but has won just one of his five UFC matches since returning.

During his MMA career, Diaz also had one professional boxing match against Alfonso Rocha, winning via unanimous decision in 2005.

Despite having an undefeated record, it wasn’t until Nick Diaz was already cemented as a UFC fighter that he started to earn a higher salary.

Even his first few matches only paid $6,000 each, with half of that money guaranteed while the other half came from his win bonus.

The first time that Diaz earned six-figure fight purses came in 2010 while with Strikeforce, and his UFC salary increased tremendously upon his return in 2011.

After fighting BJ Penn, Diaz had the biggest payout of his career at the time with $275,000, and eclipsed that with payouts of $400,000 and $566,000 for his fights against MMA legend Anderson Silva and Robbie Lawler, respectively.

Over the course of his MMA career, Nick Diaz was reported to earn $2.3 million and has an estimated net worth of $3 million when sponsorships and payouts are taken into consideration.

Nick Diaz, his younger sister Nina and younger brother Nate Diaz were raised in Stockton, California by his mother Melissa.

The Diaz brothers run a training academy in Lodi, California and were featured on the MMA documentary Fight Life in 2003.

He has never been married and does not have children, and has had relationships with women including Heather Nikole during his MMA career.

Nick Diaz didn’t wait long until he started to fill his trophy case as a mixed martial artist since he started at 18 years old.

Diaz has amassed an impressive MMA record of 26 wins, 10 losses, and 2 no contests, with several honors along the way.

Here are some of the top awards and achievements from Nick Diaz’s career:

Diaz is considered among the likes of Stipe Miocic, Max Holloway, and Tito Ortiz as some of the most influential in mixed martial arts.

Perhaps his biggest achievement on a personal level is opening a Brazilian Jiu-Jitsu school with his younger brother Nate Diaz.

How Does Nick Diaz Spend His Money?

Diaz has found himself close to the list of the richest MMA fighters in the worlds and has been able to spend lavishly.

One thing the Brazilian Jiu-Jitsu legend avoids, though, is the most expensive cars in the world as he owns a modest collection.

Among the cars that Diaz owns are a Chevy Tahoe and Jeep Cherokee, with his collection estimated to be just around $100,000.

Diaz doesn’t live in one of the most expensive houses in the world, but does have a large home in Stockton, California worth over $400,000.

Whether it’s been with Ultimate Fighting Championship, World Extreme Cagefighting or any other promotion, Nick Diaz has had one highlight after another.

With 26 wins in his MMA record, Diaz has one of the best resumes in the sport and the former welterweight champion has had several milestones.

Here are some of the best highlights of Nick Diaz’s career:

Diaz was thought to have been retired as a mixed martial artist, but resurrected his career and has continued his success.

He’s hoping to get a couple more signature wins in his career before hanging it up once again and possibly make the UFC Hall of Fame.

Nick and Nate Diaz are among the most influential MMA fighters, so people like Joe Rogan want to give them a microphone.

Whether it be with Ultimate Fighting Championship, Strikeforce, or any other promotion, Diaz has a lot on his mind.

Here are our favorite quotes from Nick Diaz:

Nick Diaz is one of those fighters that helped to make mixed martial arts popular in the mainstream and had to grow up quickly.

Because of a rough upbringing, Diaz was only a couple of weeks into adulthood when he started his MMA career and hasn’t looked back.

Now that you know all about Nick Diaz’s net worth, there’s plenty to learn from the combat sports specialist.

Here are some of the best success lessons to learn from Nick Diaz:

Nick Diaz didn’t have the best upbringing and Brazilian Jiu-Jitsu became an escape for him, and led to a prestigious MMA career.

Now, Diaz and his brother run an academy in their home town to teach BJJ and help the youth of Stockton avoid getting into trouble.

The school has been a major success, and one of the best accomplishments of Diaz’s life, both as a mixed martial artist and a person.

There have been a lot of mixed martial artists that have fought lesser competition to pad their record, but that’s not the case for Nick Diaz.

Diaz has said that he only wants to face the best competition, even if it means coming into the match as a huge underdog.

With that, Diaz has taken on some of the biggest names in MMA and cemented himself among the all-time greats in the process.

Nick Diaz has never been shy about playing up a “bad guy” persona while with the UFC, putting himself among the likes of Jon Bones Jones and Chael Sonnen.

It’s not something that Diaz might not be like, personally, but he’s willing to take on the role since it builds up drama and earns more money.

People have to be versatile with their piece in the overall puzzle, and in professional fighting, that means either playing the good guy or the heel.

Nick Diaz has taken on some of the biggest stars in mixed martial arts like Anderson Silva and Georges St Pierre while becoming a legend himself.

Diaz was able to harness his aggression from a rough upbringing and channel it into Brazilian Jiu-Jitsu which set him up for a career as a mixed martial artist.

He and his younger brother Nate Diaz are among the most notable siblings in the sport’s history, and find themselves among the richest, as well.

What do you think about Nick Diaz’s net worth? Leave a comment below.