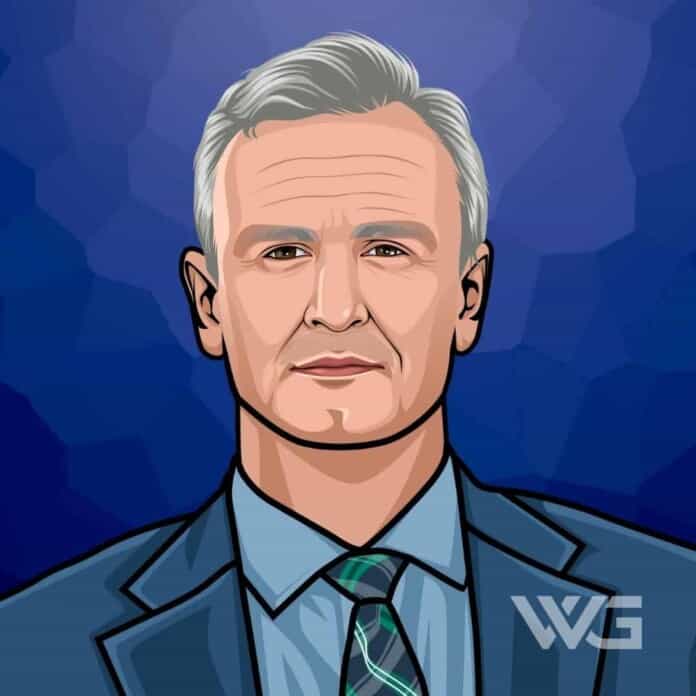 What is Trey Wingo’s net worth?

Trey Wingo is the former co-host of ESPN Golic, SportsCenter, and NFL Live. Wingo serves as host of ESPN’s NFL Live. Besides NFL, Wingo is also the host of the network’s NCAA Women’s Basketball Tournament.

He also contributes commentaries for ESPN Radio. In 1997, he joined ESPN as an ESPNEWS anchor. He has also hosted ESPN’s Baseball Tonight and ESPN2’s NFL 2Night, and NBA 2Night shows.

Hal Chapman Wingo III was born on the 19th of September, 1963, in Greenwich, Connecticut. Wingo attended high school and Baylor University, where he was a member of the Phi Delta Theta fraternity.

In 1985, he graduated from Baylor University with a bachelor’s degree in communications. Alongside with fellow ESPN broadcaster Matt Winer, he worked at KSDK-TV in St. Louis, Missouri.

Wingo started his career with NBC News at Sunrise in New York. He worked as sports director at WMGC-TV in New York from 1988 to 1990. He then went on to work at WFMZ-TV in Allentown, Pennsylvania, at WICZ-TV in Binghamton, and KSDK-TV in St. Louis, Missouri.

He was the announcer for the Arena Football League on ESPN with Mark Schlereth. He appeared on the lone in 2001, a segment of SportsCenter to announce that there would be no NFL games played that week.

Wingo hosted NFL Primetime, and in 2017, he became the co-host of the ESPN Radio morning show ‘Mike Golic,’ replacing Mike Greenberg upon the latter’s departure for ‘Get Up!’

He lent his voice to the video games ‘ESPN NFL 2K5’. Wingo has appeared in a campaign for the RW Sport luxury collection by Raymond Weil. In 2020, it was announced that he left ESPN.

How Does Trey Wingo Spend His Money?

In 2007, Wingo became an official supporter of Ronald McDonald House Charities and is a member of their celebrity board, called the Friends of RMHC. He also works closely with the Prostate Cancer Foundation and the Jimmy V Foundation for Cancer Research.

Here are some of the best highlights of Trey Wingo’s career:

“I can tell you this, which I thought was very interesting. Had the greatest job in the world for me doing ‘NFL Live,’ doing the NFL Draft, going to the Hall of Fame to host ceremonies. I loved it. I loved the job. And then they came to me and said, ‘Hey, would you consider doing this?’ I loved the job that I had. I was really torn as to whether or not I wanted to leave that to go do something else.” – Trey Wingo

“I got a call out of the blue about a month ago. They asked if I was interested in doing a couple of rounds of the Farmers. I said sure. I’m looking forward to that. We’ll talk a little bit more when I get down there.” – Trey Wingo

“I have so many people that are my dear friends who still work there. Want nothing but success for those people. I want them to have the career that I had.” – Trey Wingo

“Just so we’re 100 percent open and honest here: When I agreed to do the radio show, I said, ‘OK, I’ll do this for three years and see how it works out. That did not have anything to do with any of the people that I worked with.” – Trey Wingo

Now that you know all about Trey Wingo’s net worth and how he achieved success; let’s take a look at some of the lessons we can learn from him:

1. The Importance of Family and Friends

It’s not what we have in life but who we have in our life that matters.

Life is not fair, get used to it! It’s not easy. Life is very harsh. We have to be strong. Otherwise, life will destroy us. We must have perseverance and, above all, confidence in ourselves. We must believe that we are gifted for something and that this thing, at whatever cost, must be attained.

How much is Trey Wingo worth?

Trey Wingo’s net worth is estimated to be $10 Million.

How old is Trey Wingo?

How tall is Trey Wingo?

Trey Wingo is an American radio and television host who is best known for working for ESPN. Wingo is the son of the founding editor of People magazine Hal Wingo.

Wingo worked for NBC News in New York, and he became the “play by play” announced for the Arena Football League on ESPN.

In 2017, he hosted NFL Primetime and became the co-host of the ESPN Radio morning show ‘Golic and Wingo’.

What do you think about Trey Wingo’s net worth? Leave a comment below.