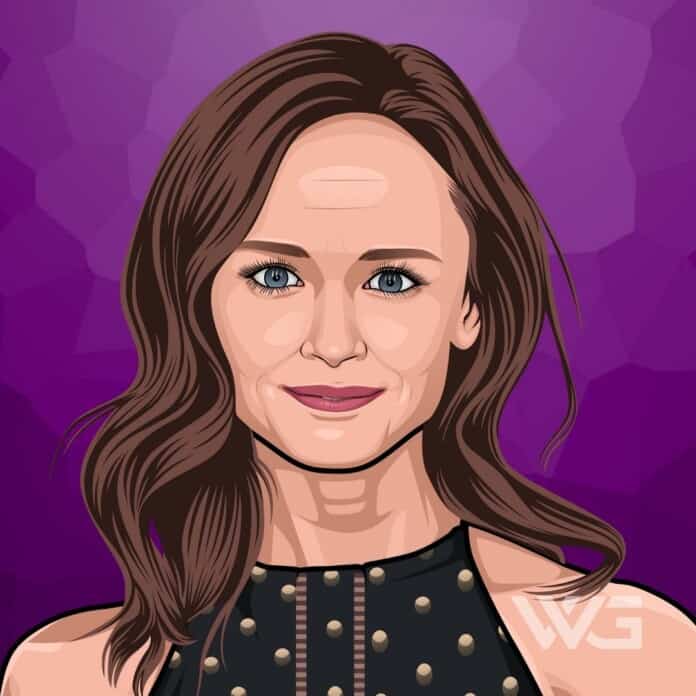 What is Alexis Bledel’s net worth?

Alexis Bledel is an American actress and model.

Bledel is best known for her role as Rory Gilmore on the television series ‘Gilmore Girls’ and Emily Malek in ‘The Handmaid’s Tale,’ for which she won the Primetime Emmy Award for Outstanding Guest Actress in a Drama Series.

She made her film debut as Winnie Foster in ‘Tuck Everlasting’.

Kimberly Alexis Bledel was born on the 16th of September, 1981, in Houston, Texas.

Bledel is the daughter of Nanette and Martin Bledel. Her father was raised and born in Argentina. Bledel’s mother, Nanette, was born in Phoenix, Arizona, and moved to Mexico City at 8.

Of her parents’ upbringing in Latin America, Bledel has stated: “It’s the only culture my mom knows from life, and my father as well, and they made the decision to raise their children within the context they had been raised in.” Bledel grew up in a Spanish-speaking household.

Bledel made her television debut in the American series ‘Gilmore Girls’. In 2004, she starred in ‘DysEnchanted,’ a short film. The same year, she also played ‘Georgina Darcy’ in ‘Bride and Prejudice.’ She earned critical acclaim for her role as ‘Becky’ in ‘Sin City’ in 2005.

Bledel signed a contract with the modeling department of ‘IMG in 2009.’ She also appeared as ‘Dr. Julia Wise’ in an episode of the television series ‘ER.’ The following year, she starred in ‘The Conspirator’ as ‘Sarah Weston.’

She joined the web drama series ‘The Handmaid’s Tale’ in 2017, where she portrayed the character of a bisexual woman named ‘Emily Malek.’

In 2019, she was seen alongside Beau Knapp and Luke Hemsworth in the crime drama ‘Crypto.’

How Does Alexis Bledel Spend Her Money?

Alexis Bledel spends some of her money on charity work.

Bledel has helped charities such as Cystic Fibrosis Foundation and Save the Children.

Here are some of the best highlights of Alexis Bledel’s career:

“You hear all these great stories about kids starting their own businesses and getting involved in their communities and politics and foundations – all kinds of things. And it’s so much easier for kids to get motivated and do that.” – Alexis Bledel

“I want to live each moment, but it’s kind of hard to do that when you are asked to analyze yourself constantly. But it’s also good in that you are forced to think about things that you don’t ordinarily think about. I think it’s strange.” – Alexis Bledel

“Most of the theater I’ve done in the past was when I was a kid or a teenager so it feels like being a kid again. I’m happier than I’ve ever been. You really get to go to work every day and play, and try different things. I don’t know, I’ve never felt so lucky to do this job. So I hope to do a lot more theater.” – Alexis Bledel

“It gets kinda monotonous, but that’s television. There are plus sides and downsides. The positive side is that you have steady work for nine months of the year for however many years your show is on TV,.” – Alexis Bledel

“I was modeling with an agency in New York and a manager with the agency introduced himself to me one day and he said he had auditions for someone my age. He asked if I would be interested in doing some.” – Alexis Bledel

“A lot of girls ask for advice on how to get into acting, and I’m the worst person to ask, because it just kind of fell in my lap… I was just in the right place at the right time.” – Alexis Bledel

Now that you know all about Alexis Bledel’s net worth and how she achieved success; let’s take a look at some of the lessons we can learn from her:

There’s so much to play in adolescence; there’s so many conflicting things happening and so many changes, and there’s just a lot of good stuff to play there as an actor.

Directors and writers have a lot of stress as well, because they have people they answer to.

Always be yourself, no matter if some people like it.

How much is Alexis Bledel worth?

Alexis Bledel’s net worth is estimated to be $6 Million.

How old is Alexis Bledel?

How tall is Alexis Bledel?

Alexis Bledel is an American actress, model, and producer. Bledel was born in Houston, Texas. She is best known for portraying Rory Gilmore in Gilmore Girls. As a child, she participated in community theater to overcome her shyness.

What do you think about Alexis Bledel’s net worth? Leave a comment below.