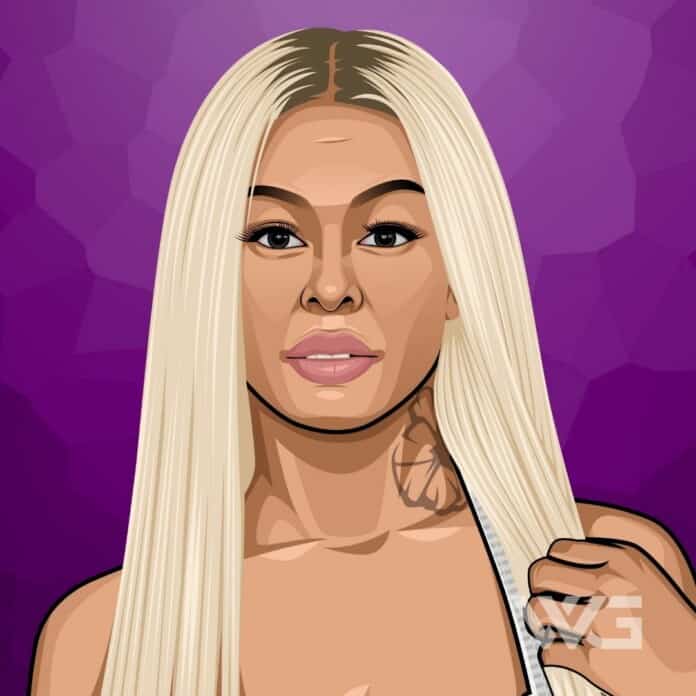 What is Alexis Skyy’s net worth?

Skyy is probably best known for being on Vh1’s tv show ‘Love & Hip Hop: Hollywood’ and ‘Love & Hip Hop: New York.’ She has received lots of media attention for her relationship with the rapper and singer Fetty Wap.

Alexis Skyy McFarland was born on the 14th of July, 1994, in Long Island City.

McFarland is of Jamaican descent. For a large part of her childhood, her father was absent from her life. Her mother and grandmother raised McFarland.

When she turned 18 years old, she met her biological father. Alongside her brothers, she was raised in Amityville.

Skyy gave birth to Fetty Wap’s daughter in 2018. She opened the Bella Sky Spa in Atlanta in 2016. She has also worked as a dancer and model.

After receiving her attention from ‘Love & Hip-Hop’ reality show, she soon launched her fashion line Curves by Skyy. She drew inspiration from her experience as a stripper and model. Today, she has a massive fan platform, and she has 4.7 million followers on Instagram.

On ‘Love & Hip Hop: Atlanta’, she was involved in a feud with Masika Kalysha, who also dated Fetty Wap. While on ‘Love & Hip Hop: New York’s most of her storylines were about her music career and her life as a mother.

How Does Alexis Skyy Spend Her Money?

Alexis Skyy lives a lavish lifestyle, and she owns many pieces of nice jewelry and real estate.

Skyy has spent some of her money on a lux house beauty bar opening with a massive celebration. The beauty bar, called Lux House Beauty Bar, will include almost every beauty service, including hair, lashes, waxing, facials, and even box.

Skyy owns tons of luxurious jewelry. One of her notable pieces includes a diamond chain necklace.

Here are some of the best highlights of Alexis Skyy’s career:

“I had a salon when I was 19, and honestly, I didn’t know anything about having a business. I came straight from the strip club trying to run a spa. And I was so busy running behind Fetty at the time. We were together, and I lost focus, and the business wasn’t doing well, so I had to close it.” – Alexis Skyy

“I felt like failure, and it always bothered me. So I stacked up my hosting money and saved everything and said, you know what, let me open up another shop,” she said. “I’m so much more focused, and I’m ready to become a millionaire.” – Alexis Skyy

“Masika is a beautiful girl at the end of the day. She’s just her. She probably holds grudges forever. Me….I’m the type of person…I wish her the best too. I really wish her the best. Khari is beautiful. And I have no issues with her.” – Alexis Skyy

“Whatever we…even to this day, she’s just going to forever hate me. And I’m okay with that. But I don’t hate her. So I’m cool with that. I can accept it.” – Alexis Skyy

“I don’t really let the Internet get to me. At first, it did bother me, but I just learned to block it out because it’s disgusting, she’s a baby. If you’re that evil to talk about a kid or what I went through, you’re just an evil person. So I just learned to tune that part out. But it was hard, I’m not going to lie. It was hard in the beginning to deal with it.” – Alexis Skyy

Now that you know all about Alexis Skyy’s net worth and how she achieved success; let’s take a look at some of the lessons we can learn from her:

No matter what you’re going through, there’s a light at the end of the tunnel and it may seem hard to get to it but you can do it and just keep working towards it and you’ll find the positive side of things.

The joy of life comes from our encounters with new experiences, and hence there is no greater joy than to have an endlessly changing horizon.

Positive feelings come from being honest about yourself and accepting your personality.

How much is Alexis Skyy worth?

Alexis Skyy’s net worth is estimated to be $500 Thousand.

How old is Alexis Skyy?

How tall is Alexis Skyy?

She was born in Long Island, and she is also known for her relationship with rapper Fetty Wap.

Between the years 2018 to 2019, she starred in the reality television series ‘Love and Hip Hop: New York.’ She is the mother of Fetty Wap’s daughter, and she has opened the Bella Sky Spa in Atlanta. Throughout her career, she has also worked as a dancer and model.

What do you think about Alexis Skyy’s net worth? Leave a comment below.