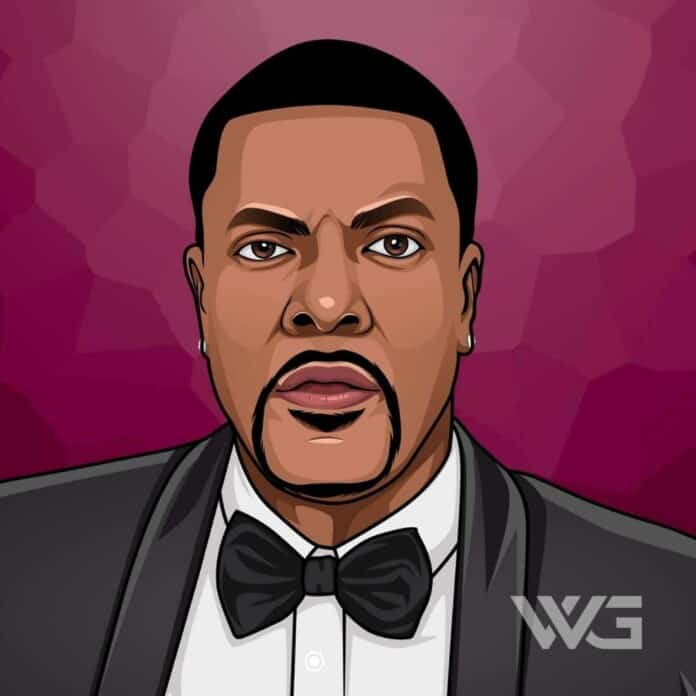 What is Chris Tucker’s net worth?

Chris Tucker is an American actor and comedian. Tucker is best known for his roles as James Carter in the ‘Rush Hour’ film series.

Tucker became a stand-up performer on Def Comedy in the 1990s. He then appeared in ‘The Fifth Element,’ ‘Silver Linings Playbook’ and ‘Money Talks’.

As of November 2022, Chris Tucker’s net worth is approximately $5 Million.

Christopher Tucker was born on the 31st of August, 1971, in Atlanta. Tucker is the youngest son of Mary Louise and Norris Tucker.

He learned early in life that he was good at doing comedy, and he had the power to draw attention to himself in school and at home. His father was a businessman who owned a janitorial service.

Tucker began his comedy career when he started doing stand-up comedy in ‘Def Comedy Jam’. This led to several appearances on the sitcom series ‘Hangin’ in 1992.

In 1994, he made his movie debut in ‘House Party 111. He was highly praised for the role, and he also received a standing ovation at press screenings in the film’s public promotions.

Tucker earned A-list celebrity status for his incredible acting for his role ‘Detective James Carter’ in the ‘Rush Hour’ series of films. He received $25 million in remunerations for ‘Rush Hour 3’, making him the highest-paid actor in Hollywood in 2007.

Throughout his career, he has won awards such as ‘MTV Movie Award for Best On-Screen Duo’and ‘Kid’s Choice Awards – Favourite Male Movie Star’.

Tucker went on to take a break from films for five years. He returned to stand-up comedy in 2011 and acting in 2012 with the film ‘Silver Linings Playbook’.

How Does Chris Tucker Spend His Money?

After Chris Tucker’s massive success of the first Rush Hour movie, he received about $20 million to appear in the sequel. With that said, Tucker has a lot of money, and he loves to spend it on luxurious things such as cars.

Chris Tucker has an amazing collection of cars in his garage. Some of his most notable purchases include an Aston Martin Vanquish and a Lamborghini Murcielago Roadster.

Tucker is a proud owner of a beautiful home in Florida. The home comes with 5 bedrooms and 6 baths. He purchased the home in 2007 for an estimated $6 million.

Here are some of the best highlights of Chris Tucker’s career:

“It’s crazy because people expect you to be funny all the time and every day is not a fun day. I go to funerals and people are like, tell a joke and say one of your lines in a movie. It’s a funeral, man!” – Chris Tucker

“He knew I was a big fan of his because, in every movie, I always have something in it about Michael Jackson. Growing up with Michael, like everybody else. I met all his family members before I met him…I wanted to meet Michael, and I was like where is Michael?” – Chris Tucker

Now that you know all about Chris Tucker’s net worth, and how he achieved success; let’s take a look at some of the lessons we can learn from him:

Comedy comes from a place of hurt. Charlie Chaplin was starving and broke in London, and that’s where he got his character ‘the tramp’ from. It’s a bad situation that he transformed into a comedic one.

2. Comedy Is More Than Just Comedy

Making people laugh is giving, and it’s healing, too, when people can go up to the movies and forget about their problems. It’s a good thing.

3. Connect With The Audience

Everybody goes through a lot of the same things. You have to connect with your audience.

How much is Chris Tucker worth?

Chris Tucker’s net worth is estimated to be $5 Million.

How old is Chris Tucker?

How tall is Chris Tucker?

When he was 19 years old, he established himself as a comedian. Throughout his long career as an actor and comedian, he has starred in films such as ‘House Party III,’ ‘Friday,’ ‘Dead Presidents,’ ‘The Fifth Element’ and ‘Money Talks’.

He is most famous for his role as James Carter in the box office hit ‘Rush Hour,’ ‘Rush Hour 2’ and ‘Rush Hour 3’.

As of November 2022, Chris Tucker’s net worth is estimated to be roughly $5 Million.

What do you think about Chris Tucker’s net worth? Leave a comment below.