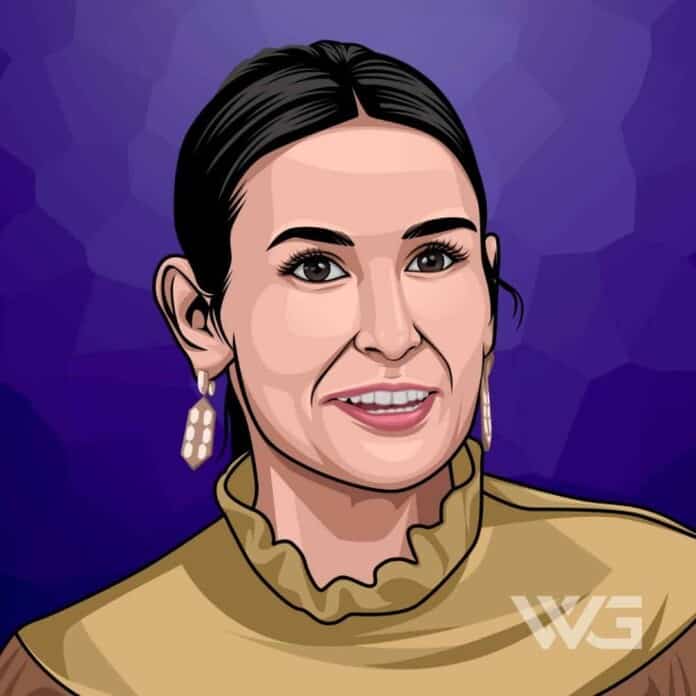 What is Demi Moore’s net worth?

Moore gained her recognition when she starred in ‘Blame it on Rio’ (1984) and ‘St. Elmo’s Fire’ (1985). She also starred in one of the highest-grossing films in the industry ‘Ghost’ (1990), for which she received a Golden Globe nomination.

Demi Gene Guynes Moore was born in Roswell, New Mexico on the 11th of November, 1962. Moore was born to Charles Harmon and Virginia Guynes. When Moore was at the age of 15 she relocated to West Hollywood where she attended Fairfax High School.

After Moore left high school she worked in many jobs such as a pin-up girl and at a debt collection agency. Moore later attended drama classes and decided that acting was the thing that she wanted to focus on.

Demi Moore made her first appearance in 1981 when she starred in ‘Choices’ which was a low-budget film in which she played a minor supporting role. A year later she got her first major role in ‘Parasite’ which was directed by Charles Band; she played the role of ‘Patricia Welles’.

In 1984, Moore played the role of ‘Nicole’ in the comedy film ‘Blame it on Rio’ which was directed by Stanley Donen. Moore’s career as an actor started to become successful. The following year she was seen in ‘St. Elmo’s Fire’ was a big success at the box office.

Moore had her big breakthrough in 1990 when she starred alongside Patrick Swayze in ‘Ghost’. The film was a major commercial success and her performance was great. The same year she starred in movies such as ‘Disclosure’, ‘A few Good Men’ and ‘Striptease’.

A few years later she was already known as one of the best female actors in Hollywood. She starred in the film ‘The Joneses’ which also had a premiere at the 2009 Toronto International Film Festival.

Moore also featured in ‘Another Happy Day’ where the film received reviews from film critics.

As of February 2023, Demi Moore’s net worth is estimated to be roughly $200 Million.

Here are some of the best highlights of Demi Moore’s career:

“Talk about meeting your soul mate … I truly feel I have been given that gift. And believe me, I wasn’t some lightweight package. I’m, like, the package that didn’t just come with luggage – I had trunks.” – Demi Moore

“There’s this idea that if you take your clothes off, somehow you must have loose morals. There’s still a negative attitude in our society towards women who use a strength that’s inherent – their femininity – in any way that might be considered seductive.” – Demi Moore

“It really isn’t anybody’s business how many people we have working for us. What’s offensive is that I’m portrayed as this prima donna with these sycophants telling me how great I am all the time. Yes, they do work for me, but we’re working together for a higher good.” – Demi Moore

“I feel sexy because I feel loved. That’s what sexy is-it’s feeling good from the inside. When you feel sexy or sensuous, you naturally want to open up and give, and I think that comes from being able to receive love and desire.” – Demi Moore

“In my personal life, I wasn’t someone who cried easily, someone who was extremely vulnerable, you know, in that way that’s constantly seeking out affirmation from other people. I’ve always been much more the person who took care of everyone else.” – Demi Moore

How much is Demi Moore worth?

Demi Moore’s net worth is estimated to be $200 Million.

How old is Demi Moore?

How tall is Demi Moore?

Demi Moore is a very successful actress and has worked with stars such as Patrick Swayze, Miley Cyrus, and Scarlett Johansson.

As of February 2023, Demi Moore has built a high net worth estimated to be $200 Million.

What do you think about Demi Moore’s net worth? Leave a comment below.