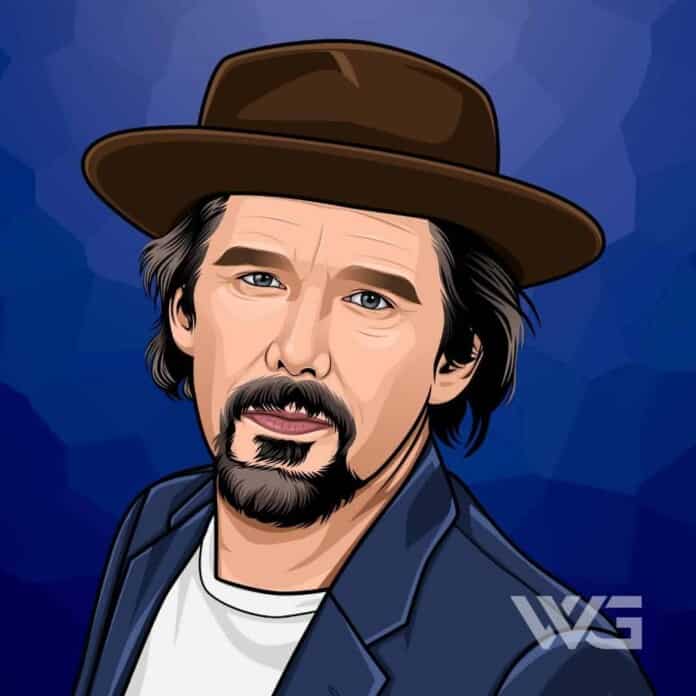 What is Ethan Hawke’s net worth?

Ethan Hawke is an actor and director.

Hawke has been nominated for many Academy Awards. He has directed three films, three off-Broadway plays, and a documentary.

Throughout his career, he has also written three novels. In 1985, he made his film debut in ‘Explorers’ before making his breakthrough appearance in ‘Dead Poets Society.’

Ethan Green Hawke was born on the 6th of November, 1970, in Austin, Texas.

Hawke is the son of James Hawke and Leslie Green. His parents were high school sweethearts and married young. His parents both studied at the University of Texas at Austin at the time of his birth.

After his parents divorced, he was raised by his mother. They moved much time before they settled in New York. He attended the Packer Collegiate Institute in Brooklyn Heights. His mother remarried when he was 10 years old, and the family moved to West Windsor Township, New Jersey.

Hawke those to fame with his role in ‘Explorers’. The film was a failure at the box office but he made a name for himself in the entertainment industry.

He starred in another few roles in films like ‘Snow Falling on Cedars’ and ‘The Newton Boys’. He rose to fame in the film ‘Training Day’ which proved to be a massive box office hit. His next appearance was alongside Nicolas Cage in ‘Lord of War’.

In 2007, Hawke was in the cast of ‘Before the Devil Knows You’re Dead’. This film got strong reviews. In 2010, he followed up by playing a vampire in the movie ‘Daybreakers’. He continued by appearing in the horror movie ‘Sinister’.

He starred in another memorable film ‘The Purge’ during this period and he earned critical praise for his performance in ‘Boyhood’. In 2017, he booked a role in the movie ‘Valerian and the City of a Thousand Planets’. In 2020, he played Nikola tesla in ‘Tesla’.

How Does Ethan Hawke Spend His Money?

Hawke owns a home in Brooklyn, which he bought in 2013 for $3.9 million. It comes with six bedrooms. It comes with excellent features such as wide plank wood floors and stained glass windows. He has also revealed that he bought his own private island in Nova Scotia in Canada.

Here are some of the best highlights of Ethan Hawke’s career:

“Depression is a real demon in the woods for a lot of creative people, you know? It’s part of what the documentary is trying to be about for me, finding balance, where the beauty that is attainable in the creative arts can be matched with the scratchy roughness of regular life.” – Ethan Hawke

“Sometimes in the life of an actor, you’re not getting offered any jobs that speak to you. The trouble with acting is that you’re only as good as your opportunities.” – Ethan Hawke

“Don’t you find it odd, that when you’re a kid, everyone, all the world, encourages you to follow your dreams? But when you’re older, somehow they act offended if you even try.” – Ethan Hawke

“My goal is to tell good stories. And to try as best I can to do something new with acting. To learn from the past and to be a relevant artist. To make stories that are interesting and contemporary and to tell some kind of emotional truth.” – Ethan Hawke

“If you can channel the best part of you that is bigger than yourself, where it’s not about your ego and not about getting ahead, then you can have fun, and you aren’t jealous of others. You see other people’s talent as another branch of your own. You can keep it rooted in joy. Life is long, and there are plenty of opportunities to make mistakes. The point of it all is to learn.” – Ethan Hawke

Now that you know all about Ethan Hawke’s net worth and how he achieved success; let’s take a look at some of the best lessons we can learn from him:

There’s something about knowing life is finite that makes it so precious.

As a young man… you don’t know anything about yourself. And add on to that, you’re on the cover of magazines. Hawke grew up with this image, and it takes a lot of time to know yourself.

If you’re not a real chameleon of an actor and if you’re not one of those guys who can really shape-change themselves all the time, one of the ways to keep pushing yourself and keep changing is to be in different kinds of movies.

How much is Ethan Hawke worth?

Ethan Hawke’s net worth is estimated to be $55 Million.

How old is Ethan Hawke?

How tall is Ethan Hawke?

Ethan Hawke is a well-known actor and director.

He is one of the best actors of his generation since he has appeared in an enormous number of memorable films of the past few decades. Over the course of his career, he has won a number of honors and accolades. He made a name for himself with the movies Reality Bites’, and Richard Linklater’s ‘Before’ trilogy.

What do you think about Ethan Hawke’s net worth? Leave a comment below.