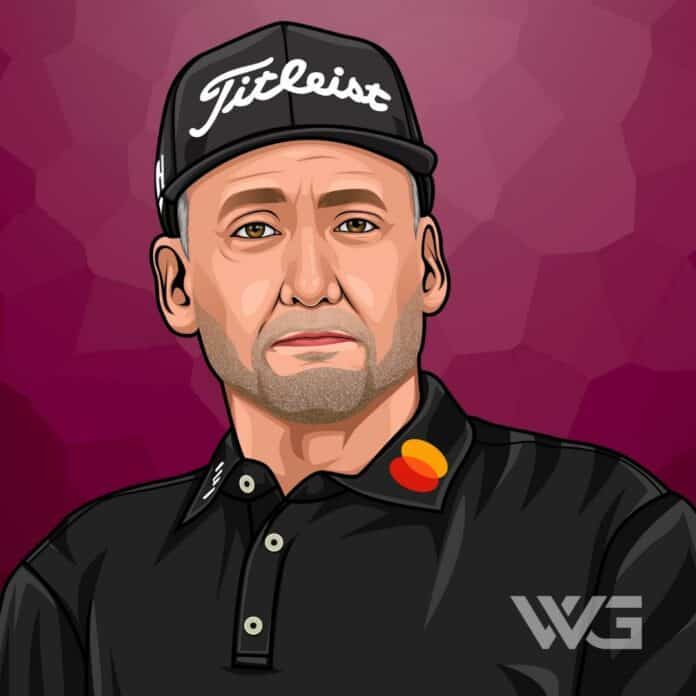 What is Ian Poulter’s net worth?

Ian Poulter is an English professional golfer who plays with LIV golf and has won two World Golf Championships over the course of his career.

At the peak of his performance, he was ranked number 5 in the Official World Golf Rankings, with a total of 12 professional tour victories to his credit,

Ian James Poulter was born 10 January, 1976, in Hitchin, Hertfordshire, England, where he was raised along with his older brother, Danny.

He began playing golf at the age of four, after his single-handicap father, Terry, gave him a cut-down 3-wood.

After working as the assistant pro and golf shop manager at the Chesfield Downs Golf Club, Poulter also worked as an Assistant Pro at Leighton Buzzard golf course.

In 1996, Ian Poulter began his career as a professional golfer, experiencing his first win at the 1999 Open de Côte d’Ivoire.

The same year, he was promoted to the European Tour, winning the Italian Open in his first season as a rookie player.

He continued to rise through the ranks over the following years, competing against iconic players, including Henrik Stenson and winning his first U.S. tournament in 2010.

At the Volvo World Match Play Championship, he defeated Francesco Molinari and secured his eleventh Tour victory so far.

In 2016, Darren Clarke named him as one of the vice-captains for the Ryder Cup, despite being previously sidelined for a foot injury.

He has been sponsored by several sporting goods manufacturers, including the makers of some of the most expensive golf balls in the world, Titleist.

Throughout his professional career, Ian Poulter has won large sums of prize money for golfing tournaments that have added to his impressive net worth.

His income has been further augmented through lucrative sponsorship deals worth several million dollars annually.

Poulter’s earning capacity has dropped in recent years compared to his career peak, but his ongoing involvement in the sport means there’s potential room for growth.

With a net worth on par with some of the richest golfers in the world, Ian Poulter’s wealth and assets have continued to grow over the years.

This growth has been enhanced through a combination of tournament winnings, totaling around $60 million, with his brand endorsement contracts.

With these endorsements continuing to drive his net worth growth, his wealth and assets will likely increase in the coming years.

Ian Poulter is married to his wife Katie Poulter, with whom he has four children, and resides in Lake Nona Golf & Country Club in Orlando, Florida.

Poulter and his family also live in a second home in Milton Keynes, Buckinghamshire, where they stay while visiting relatives based in the UK.

His official Instagram account, featuring over 500,000 followers, is used to encourage younger golfers to develop their skills and turn professional.

Ian Poulter has accomplished many achievements to become one of the richest athletes in the world, with a long list of victories to his name.

Here are some of the notable awards and championship victories from Ian Poulter’s career:

With Poulter continuing to play golf professionally, more championship victories and achievements are likely to come.

How Does Ian Poulter Spend His Money?

Ian Poulter’s impressive wealth and fortune mean he is able to afford many luxurious items, and he’s well known for his impressive car collection.

Featuring some of the most expensive cars in the world, he has many rare and collectible Ferraris in his collection, including a 1985 Ferrari 288 GTO, a Ferrari F40, and a Ferrari F50.

Other cars in his collection include two expensive Mercedes-Benz, including a Mercedes AMG GTS and a Mercedes G63.

Ian Poulter has experienced many notable high points and successes as a professional golfer throughout his career.

Along with his championship titles and other tournament wins, he’s established his own clothing company and is noted for his eccentric fashion style.

Here are some of the best highlights of Ian Poulter’s career:

With more contests and lucrative business ventures in the pipeline, Poulter’s career highlights are likely to continue to grow.

Ian Poulter has frequently engaged with the media over the course of his career, sharing his insights into the sport and his approach to developing his skills.

This also includes reflections on his losses and the lessons he’s learned when facing defeat on the golf course.

Here are our favorite quotes from Ian Poulter:

Now that you know all about Ian Poulter’s net worth, we’ll examine some of the impressive life lessons we can learn from his experiences.

He’s often spoken about his approach to the right mindset for success, which is something we can all adapt to our own pursuits.

Here are some of the best success lessons to learn from Ian Poulter:

Poulter’s approach to mindset requires complete faith in your ability to deliver the very best results.

While some people want success, only those who truly believe in it are likely to achieve it.

2. You Don’t Need A Degree To Be A Success

With his lack of an amateur career, many would have doubted Poulter’s ability to take his golfing to the professional level.

He certainly proved them wrong, with an outstanding career as a pro featuring many championship wins.

Balancing his professional career with his personal life is of crucial importance to Poulter, in particular since he first became a father.

There you have it, our comprehensive article exploring the professional wins and lucrative endorsements that helped Ian Poulter earn his impressive net worth.

His PGA Tour wins and his Ryder Cup successes have helped him become one of the richest golfers currently active.

Since his career is far from over, we’ll update this article in the future to make sure it includes the most up-to-date facts, figures, and net worth.

What do you think about Ian Poulter’s net worth? Leave a comment below.