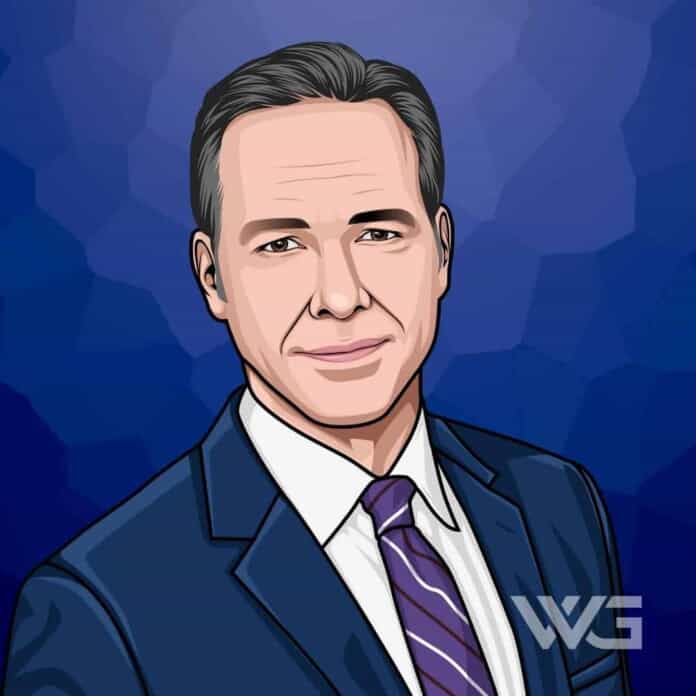 What is Jake Tapper’s net worth?

Jake Tapper is an American journalist, author, and cartoonist.

Tapper is the Lead Washington Anchor for CNN. He hosts the weekday television news show ‘The Lead with Jake Tapper’ and co-hosts the Sunday morning public affairs program ‘State of the Union’.

Before Tapper joined CNN, he worked for ABC News as Senior White House Correspondent where he received three Merriman Smith Memorial Awards. He helped with the coverage of the inauguration of former President Obama that earned an Emmy Award.

Jake Tapper was born on the 12th of March, 1969, in New York. Tapper is the son of Theodore S and Helen Anne Tapper. His other was originally from Canada and worked as a psychiatric nurse. His father graduated from Dartmouth College and Harvard Medical School.

When Tapper was younger he spent summer attending the Jewish summer camp in the Poconos. His parents are Jewish and his mother converted to Judaism.

Tapper started his career by serving as a Campaign Press Secretary in 1992. He also worked for Powell Tate, a public relations firm run by Democrat Jody Powell and Sheila Tate.

Tapper was the Washington Correspondent for Salon.com between 1999 to 2002. His reports about Enron were nominated for a 2002 Columbia University School of Journalism.

In 2001, he was the host of the CNN news talk show, ‘Take Five’. In 2003, ABC News hired Tapper. While working on ABC News he covered a range of topics including work in the ABC News Baghdad bureau, from New Orleans after the failure of the levees after Hurricane Katrina, and from Afghanistan.

He was named “Senior White House Correspondent” in 2008. In 2010, 2011, and 2012, the White House Association awarded him the “Merriman Smith Memorial Award” for presidential coverage under deadline pressure.

Here are some of the best highlights of Jake Tapper’s career:

“Let’s all recognize that, in a world full of disgusting dictators, Bashar Assad maybe ranks at the top. This is a guy, in order to hang on to power, has allowed 400,000 people in his own country to be killed and millions to be displaced. Our goal, long term, has got to work with countries around the world. We cannot do it unilaterally.” – Jake Tapper

“Terrorism and trade policy are clearly topics where Trump expresses the fears and concerns of many American people. There is a widespread feeling in this country that the government has been too willing to go into trade deals that sent American jobs to Mexico or to China. The affected communities feel left behind. It is one of the reasons for Trump’s rise.” – Jake Tapper

“The idea is, Mr. [Donald] Trump won the primaries in no small way because he had this very forceful position, saying all 11 or 12 million undocumented immigrants will be forced to leave the country.” – Jake Tapper

“I get that that the violent illegal immigrants will be removed from the country. But what I am not hearing and I am wondering, for people out there – and, look, it’s not just the liberal media, right? It’s also conservatives.” – Jake Tapper

“It’s been said that history doesn’t repeat itself but it rhymes, and whether you are reading about McCarthy or Nixon or Bill Clinton, there’s a lot of rhyming. I don’t know that there’s any particular president or politician that is exactly the same as President Trump. There are certainly shades of overlap, and President Trump didn’t invent lying or smearing.” – Jake Tapper

“I think Trump and Trumpism is a manifestation of many different parts of American popular cultural and societal evolution including the increasing importance of celebrity.” – Jake Tapper

Now that you know all about Jake Tapper’s net worth, and how he achieved success; let’s take a look at some of the lessons we can learn from him:

Everybody should work in their nation’s capital and see how politics actually work.

How much is Jake Tapper worth?

Jake Tapper’s net worth is estimated to be $16 Million.

How old is Jake Tapper?

How tall is Jake Tapper?

Jake Tapper is an American journalist and author who was born in New York.

Tapper serves as the Cheif Washington Correspondent and anchors for CNN. He is also an anchor of the Sunday morning series ‘State of the Union’.

Tapper received an Emmy Award for his coverage of the inauguration of President Obama. Throughout his career, he has authored many books including ‘The Outpost: An Untold Story of American Valor’ in 2012. He produced a comic strip called ‘Capital Hell’ between 1994 to 2003.

What do you think about Jake Tapper’s net worth? Leave a comment below.