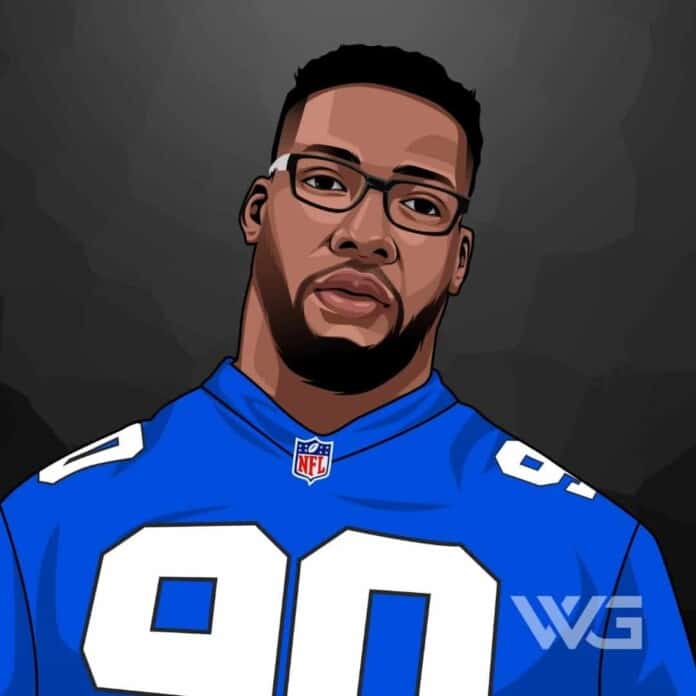 What is Jason Pierre-Paul’s net worth?

Jason Pierre-Paul is an American football outside linebacker for the Tampa Bay Buccaneers of the NFL.

Pierre-Paul played college football at South Florida and was drafted by the New York Giants in the first round of the 2010 NFL Draft.

As of January 2023, Jason Pierre-Paul’s net worth is estimated to be $35 Million.

Jason Pierre-Paul was born on the 1st of January, 1989, in Deerfield Beach, Florida.

He is the son to Haitian immigrants who arrived in the United States in 1983. At Deerfield Beach High School, Pierre-Paul lettered in basketball for four years.

After a serious leg injury, while playing basketball, he took up football in his junior year.

Pierre-Paul was drafted by the New York Giants with the 15th overall pick in the 2010 NFL Draft. The same year, Pierre-Paul and the Giants agreed to a five-year, $20.05 million deal with $11.629 million guaranteed.

He made his NFL debut on September 12, 2010, in the New York Giants’ season opener, and recorded 2 tackles. He finished the season playing a total of 16 games, totalling 24 solo tackles and recording 4.5 sacks.

On December 11, 2011, after already compiling two sacks (one for a safety) and a forced fumble, Pierre-Paul blocked Dan Bailey’s 47-yard field goal attempt in the final seconds of the Giants’ game against the Dallas Cowboys.

In 2016, Pierre-Paul turned down a better offer from the Arizona Cardinals to stay with the Giants on a 1-year deal worth $10.5 million In Week 12, he registered three sacks including a strip-sack that he took back 43 yards for his third career touchdown against the Browns in a 27-13 win.

Pierre-Paul was named NFC Defensive Player of the Week for his performance in Week 12.

Here are some of the best highlights of Jason Pierre-Paul’s career:

“My dad never quit no matter what. He couldn’t see, but he never let that stop him. Most people, when something like that happens, they just think their life is over. But that’s not true. My dad can still do things like a normal person. He still cooks; he still watches my sister and my brother’s baby when my mom’s not home.” – Jason Pierre-Paul

“I feel like, after my incident, it really made me realize football is not here forever. I’m all the more anxious to come out here and let my teammates know, ‘Look, hey, this is the same JPP. Missing fingers aren’t going to stop me from playing some ball.” – Jason Pierre-Paul

“I’m just god-gifted: I have a talent. Even when I played basketball, no one ever taught me the game. I just played it. And with football, I just converted basketball to football and just played.” – Jason Pierre-Paul

Now that you know all about Jason Pierre-Paul’s net worth, and how he achieved success; let’s take a look at some of the lessons we can learn from him:

Success depends in a very large measure upon individual initiative and exertion, and cannot be achieved except by a dint of hard work.

Success comes to you with luck and a lot of hard work, but it doesn’t give you the right to be any better than anybody else.

You can achieve anything you put your mind and hard work to.

How much is Jason Pierre-Paul worth?

Jason Pierre-Paul’s net worth is estimated to be $35 Million.

How old is Jason Pierre-Paul?

How tall is Jason Pierre-Paul?

Jason Pierre-Paul is an American professional football player who was drafted #15 by the New York Giants in the 2010 NFL Draft and has played for the Giants his entire career.

What do you think about Jason Pierre-Paul’s net worth? Leave a comment below.