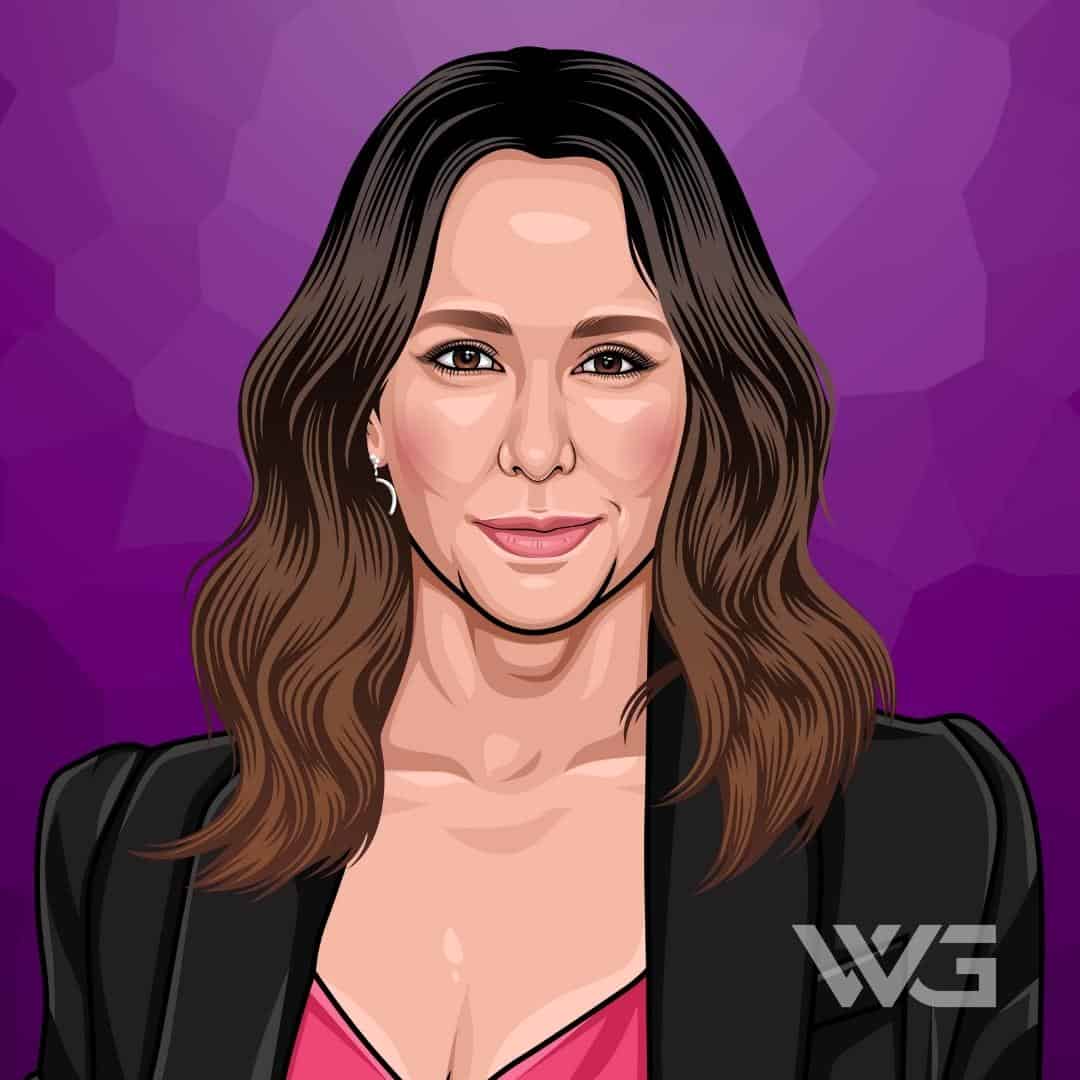 What is Jennifer Love Hewitt’s net worth?

She developed a huge following for her portrayal of the character Julie James, in the cult films, I Know What You Did Last Summer and its sequel in the 1990s.

Jennifer Hewitt starred in various TV series from the early 2000s, including the immensely popular, “The Ghost Whisperer” and “The Client List”.

As of December 2022, Jennifer Love Hewitt’s net worth is estimated to be $22 Million.

Jennifer Love Hewitt was born on 21 February 1979, in Waco, Texas. Her parents, Patricia Mae and Herbert Daniel Hewitt, raised her in Nolanville in Central Texas.

When Jennifer was still quite young, her parents divorced, leaving her mother to raise her and her older brother.

Her love for music started when she was young and, at the age of three, she wowed her audience by singing “The Greatest Love of All” at a local livestock show.

By the time she was four years old, Hewitt had entertained audiences at restaurant dance halls with her version of “Help Me Make It Through the Night.”

At the age of five, she branched out and became a dancer and by the time she reached the age of ten, she had won the Texas “Our Little Miss Talent pageant.” From there, she and her mother moved to Los Angeles to pursue a career in acting and singing.

While still a child, Jennifer Love Hewitt registered with a modelling agency and began featuring in TV commercials.

She met Jonathan Nelville while at Lincoln High School and he would later become a talent scout, recommending Hewitt for her breakthrough role in “Party of Five.”

Throughout high school, Jennifer appeared in various TV commercials before landing a role on the Disney Channel’s “Kids Incorporated.” As a member of the cast, she was awarded three Young Artist Award nominations.

In 1993, Jennifer starred in the comedy film, “Little Miss Millions.” She also had a brief appearance in the movie, Sister Act 2: Back in the Habit, in the same year.

Shooting straight for the top, Love Hewitt landed a featured role as Sara Reeves Merrin in 1995s “Party of Five.”

Though she was only supposed to feature occasionally in the series, she managed to score a regular role based on her popularity with the audience. It was for these performances that she received a Kid’s Choice Award, a Teen Choice Award, and a Young Star Award.

In 1997, Jennifer appeared in the hit movie “I Know What You Did Last Summer”, playing Julie James. The movie was a hit worldwide, and grossed more than $125 million.

The next film she starred in, “Can’t Hardly Wait,” featured in 1998. The following year, Love Hewitt acted in and produced a spin-off, titled “Time of Your Life.”

In the early 2000s, she starred in movies like “The Audrey Hepburn Story” and “Garfield.”

Jennifer took on the leading role in “The Ghost Whisperer” and played her character throughout the show’s run from 2005 to 2010.

As for her music career, in 1992, Jennifer Love Hewitt became a successful vocalist. She released her debut studio album “Love Songs” and released the album, “How Do I Deal,” in 1999.

In 2002, she was signed to Jive Records and released another album, “Bare Naked”, which had a fair amount of success together with her single by the same name.

The second single, “Can I Go Now,” was not as successful as the first, but was quite popular in the Netherlands and Australia.

In 2004, Jennifer Love Hewitt left her music career behind, focusing on her acting instead.

When Love Hewitt started her career, she only earned a few thousand dollars. But now, she earns an estimated salary of $3 million per movie. Her highest earning movie was Garfield, which grossed $200 million at the box office.

Here is an estimated overview of Jennifer Love Hewitt’s income:

Jennifer is a popular actress whose name draws crowds of adoring fans. She may not be earning the huge amounts she made earlier in her career, but she is still a wealthy actress in her own right.

In 2001, Love Hewitt earned $4 million for her portrayal of Page Conners in the film Heartbreakers. In the early days, she was paid more than $150,000 per episode for the 2005 series “Ghost Whisperer.”

Here’s a breakdown of Jennifer Love Hewitt’s annual net worth:

After making an appearance on Ghost Whisperer, Ross McCall started dating Jennifer and in November of 2007, they were engaged. However, Hewitt called it off in the later months of 2008.

In 2013, Love Hewitt married actor Brian Hallisay. They met while working together on the film “The Client List.” They are still happily married today with two children, Autumn James, and Atticus James.

Jennifer has been a firm favorite with audiences since she first appeared on screen as a child. This is reflected in the popularity of the TV series she’s starred in.

Here are some of the more memorable moments in Jennifer Love Hewitt’s career:

While she may not be quite as visible on TV today as she’s been in the past, we’re certain that Jennifer will find yet more intriguing roles to play, like her 9-1-1 character, that will keep her many fans glued to their seats.

How Does Jennifer Love Hewitt Spend Her Money?

Jennifer Love Hewitt has an eye for real estate, owning 3 properties in the Toluca Lake area of Los Angeles over the years. She apparently sold one of these homes to Hilary Duff for $1.7 million in 2006.

She sold another property to Jessica Simpson’s mother for a reputed $4.1 million in 2006 as well.

Her Pacific Palisades home was sold for upwards of $3.25 million and Jennifer currently lives in a mansion worth in excess of $6 million.

Apart from expensive watches and designed jewellery, Jennifer drives some of the most expensive cars in the world, being particularly fond of Mercedes Benz.

Jennifer’s roles have all been big hits. From her earliest roles to her latest performance, her fans and critics have had nothing but praise for her acting ability.

Here are some of the best highlights of Jennifer Love Hewitt’s career:

With her latest TV series role bringing in praise and adoration, we’re positive that Jennifer is going to grace our screens for many years to come.

Jennifer is known for her kind nature and concern for those around her. She also has a wicked sense of humor and is known to pull her interviewers’ legs, to howls of laughter from the audience.

Here are some of our favorite quotes from Jennifer Love Hewitt:

Anyone who dismisses Jennifer is in for a surprise, because below the cutesy surface lies the heart of a lion. She’s quick to jump to the defence of anyone who she sees in distress, and is determined to keep it real.

Here are some of the best success lessons to learn from Jennifer Love Hewitt:

1. Don’t Be Afraid Of Hard Decisions

She’s very aware of her priorities and feels that driving drunk ain’t the only thing friends don’t let friends do.

Denial ain’t just a river in Egypt. This is what she thinks about not taking responsibility for one’s actions.

3. Good Looks Only Get You So Far

While Jennifer is undeniably attractive, to reach the top of one’s career takes hard work and guts. These are things that she’s got in spades.

Jennifer Love Hewitt is one of the most popular actresses and singer-songwriters in LA. Since her early success in the drama series “Party of Five” she’s entertained her fans as both a singer and as an actress.

She maintained her popularity from the 1990s and early 2000s when “The Ghost Whisperer” and “The Client List” kept her name up in lights worldwide. Her current role in 9-1-1 continues to boost her earnings and wealth.

As of December 2022, Jennifer Love Hewitt’s net worth is estimated to be $22 Million.

What do you think about Jennifer Love Hewitt’s net worth? Leave a comment below.