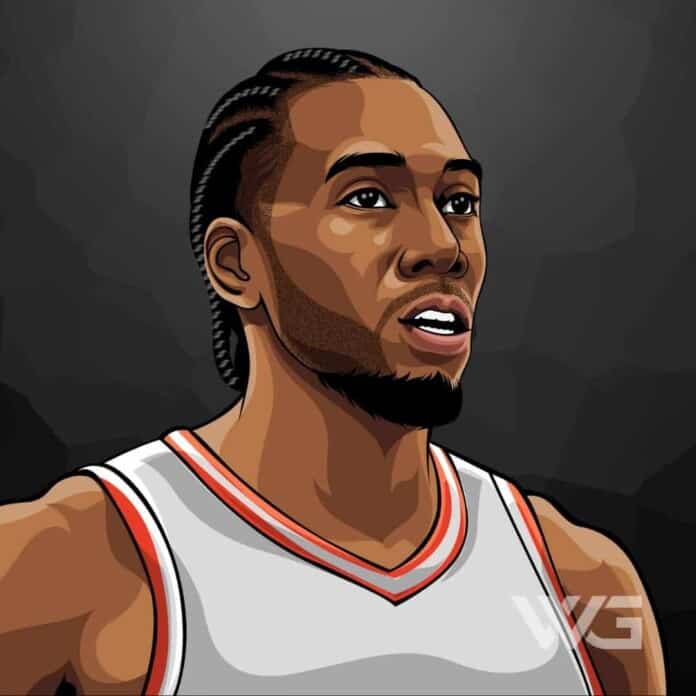 What is Kawhi Leonard’s net worth?

As of December 2022, Kawhi Leonard’s net worth is approximately ‎$80 Million.

Kawhi Leonard is an American professional basketball player for the Toronto Raptors of the NBA.

Kawhi Anthony Leonard was born on the 29th of June, 1991, in Los Angeles. Leonard is the son to Mark Leonard and Kim Robertson. In 2008, Leonard’s father was murdered by some unknown assailants, while he was at his car wash center.

In 2009, Leonard joined the ‘San Diego State University,’ and started his amateur career in his freshman year. He joined the university basketball team, ‘Aztecs,’ and led them to a 25-9 record, and a win in the ‘Mountain West Conference’ tournament.

He surrendered his two seasons at the university, and entered the ‘2011 NBA Draft.’ He was selected as the 15th overall pick by the ‘Indiana Pacers,’ but was traded to ‘San Antonio Spurs.’

In the 2012-13 season, Leonard was selected to play for the ‘BBVA Rising Stars Challenge.’ He led the ‘Spurs’ to ‘NBA Finals,’ where they played against ‘Miami Heat.’ In the game, Leonard averaged 14.6 points and 11.1 rebounds.

Leonard set a career-high of 38 points, in a loss to ‘Phoenix Suns in 2017.’ In the ‘2017 NBA All-Star Game,’ Leonard was named as the starter for the ‘Western Conference’ team. In the season, he again set a new career-high of 41 points, in a win over ‘Cleveland Cavaliers.’

In June 2018, there were reports that Leonard had requested a trade from the ‘Spurs.’ In July, he was traded to the ‘Toronto Raptors.’ In his debut game for ‘Raptors,’ Leonard scored 24 points and 12 rebounds.

Here are some of the best highlights of Kawhi Leonard’s career:

“I want the kids to know that it’s not a myth that somebody from their city plays and wins in the NBA. I just want to influence them to work hard and do whatever they want to do in life, whether it’s to be a basketball player or scientist… if they believe in themselves, they can do anything.” – Kawhi Leonard

“My dad leaving my life. That’s the biggest thing that happened to me. I just remember what he tells me, the memories, and try to move on forward each day, knowing that he’s still here, looking down on me.” – Kawhi Leonard

“I look at the film, but more than watching individual players, I’m trying to watch a team’s whole offensive scheme. I’m trying to know their tendencies so I can… guess. That’s what it comes down to, really, making the best guess.” – Kawhi Leonard

“Whoever I’m playing against, I go in and try to stop their best scorer and try to get myself going on the offensive end.” – Kawhi Leonard

Now that you know all about Kawhi Leonard’s net worth, and how he achieved success; let’s take a look at some of the lessons we can learn from him:

1. Our Greatest Accomplishments Are Often Proceeded By Great Failure

Someone needs to be reminded of this lesson today. With 10.8 seconds remaining, Leonard missed a free throw. Jimmy Butler turned that miscue into a fast-break layup tying the score 90-90 with 4.2 seconds remaining. Leonard said, “I was disappointed missing that free throw. I was very mad.”

Leonard said, “I tried to race down and get the rebound. Probably should have sprinted back to give some help on that layup that Jimmy made. But after that, I was just like, whatever play he drew up, I’m gonna have to get to my spot and shoot it with confidence.”

Raptors head coach Nick Nurse said, “We run Kyle [Lowry] off their first as the first option. Then, Kawhi loops under there and gets it at the top and it’s his call from there, what to do.”

How much is Kawhi Leonard worth?

Kawhi Leonard’s net worth is estimated to be $80 Million.

How old is Kawhi Leonard?

How tall is Kawhi Leonard?

Kawhi Leonard is an American professional basketball player. He is currently playing for the team, ‘Toronto Raptors,’ of the ‘National Basketball Association.’ He is one of the most valuable players of the ‘NBA.’

As of December 2022, Kawhi Leonard’s net worth is estimated to be‎ $80 Million.

What do you think about Kawhi Leonard’s net worth? Leave a comment below.