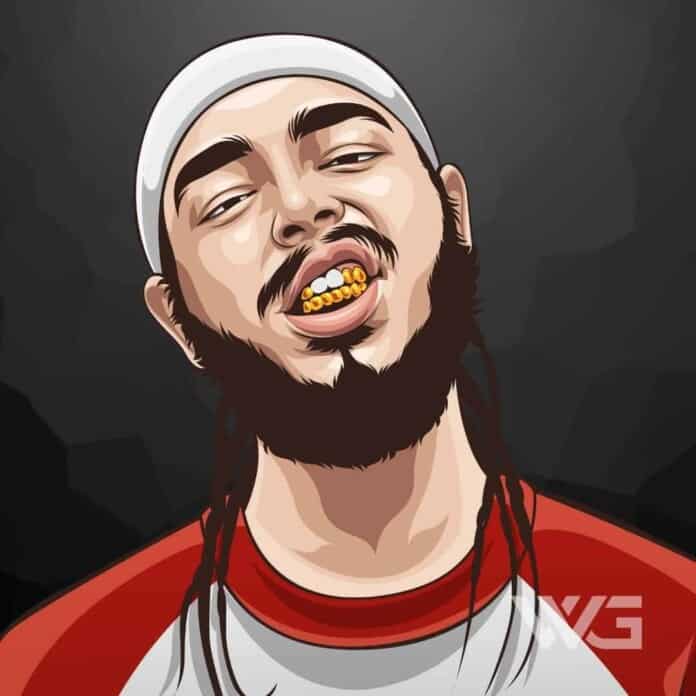 As of February 2023, Post Malone’s net worth is already $45 Million; which is impressive for only a four-year career so far.

Post Malone is an American rapper, singer, and songwriter. His debut single “White Iverson” was released 3 years ago and was responsible for his initial recognition in the industry.

Austin Richard Post was born on the 4th July, 1995, in Syracuse, New York. However, the family moved to Grapevine, Texas, when Malone was only 9 years old. His father became the manager of concessions for the Dallas Cowboys.

Malone’s first interest in music came from playing Guitar Hero as a kid; after which he began to play guitar. He played in a metal band at one point and also learned the producing side of things on FL Studio.

At 16 years old, he created his first mix-tape, which he passed out to friends at school; and he was voted by his classmates as “Most Likely to Become Famous”.

Austin came up with the stage name ‘Post Malone’ when he was 15 years old. His debut single, “White Iverson”, was recorded only 2 days after he’d finished writing it, and completed in February 2015.

The song quickly received over 1 million views online and was praised by many other artists. Malone captured the attention of record labels and was signed to Republic Records later that year.

Although Post Malone’s career only began two years ago, he’s quickly becoming a sensation; and Rolling Stone even named him as one of the most popular musicians in the country.

Some of Malone’s hits have reached hundreds of millions of views online, including the likes of ‘Rockstar’ featuring 21 Savage.

Malone has also collaborated on tracks with the likes of 50 Cent, Kanye West, and Gucci Mane.

As of February 2023, Post Malone’s net worth is $45 Million, and no doubt will this figure increase rapidly in the next few years.

A lot of celebrities want to live in Hollywood Hills. Malone had a different idea for his rockstar retreat. According to TMZ, in 2018 Malone bought a $3 million house outside Salt Lake City, Utah.

Despite being worth millions, when it comes to making food at home, Post Malone is just like the rest of us. He’s ready to order up the delivery in a heartbeat. According to The Hollywood Reporter, in 2018 alone the rapper spent more than $40,000 ordering Post-mates.

Here are some of the best highlights of Post Malone’s career:

“You can’t get tired in the studio. It’s really tough. But you just gotta keep on going.” – Post Malone

“I’m just trying to make music everybody can get happy to and vibe to and turn up to. So long as I keep making good music, everything’s going to be OK.” – Post Malone

“Once you have an established song, you can really come out of your shell and experiment with the sound you want to make.” – Post Malone

“You just got with the flow because life is just all about how you feel.” – Post Malone

View our larger collection of the best Post Malone quotes!

1. He was voted “Most Likely To Become Famous” as a senior at Grapevine High School.

2. His birth name is Austin Post. He got the Malone part from a rap name generator.

3. White Iverson was written two days before recording and posting it to his SoundCloud.

4. He credits Bob Dylan as one of his biggest musical inspirations, and he even has a Dylan portrait tattoo.

6. Post started learning to play the guitar thanks to the popular video game ‘Guitar Hero’.

7. As a teenager, Post Malone worked at Chicken Express.

8. Before he became a rapper, Post was in a metal band.

10. Post has a portrait tattoo of President John F. Kennedy, who he admires for speaking out against “crazy corruption stuff” in American government.

Post Malone’s net worth is estimated to be $45 Million.

Post Malone is just beginning his music career, but he’s already been able to rack up a large following, at only 22 years old.