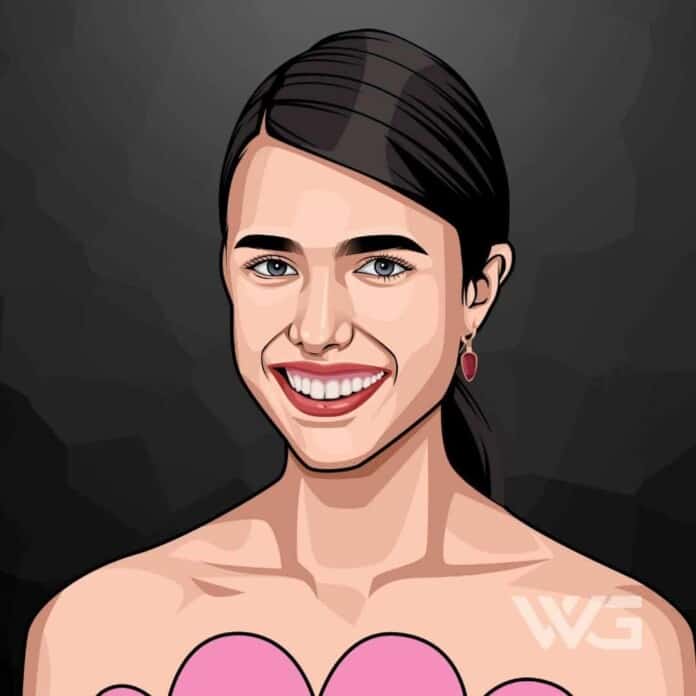 What is Margaret Qualley’s net worth?

As of February 2023, Margaret Qualley’s net worth is $3 Million.

Sarah Margaret Qualley is an American actress and dancer from Montana.

Qualley gained recognition for playing a troubled daughter in the HBO mystery series ‘The Leftovers’ and for portraying the actress and dancer Ann Reinking in the FX biographical drama miniseries ‘Fosse/Verdon’.

Sarah Margaret Qualley was born on the 23rd of October, 1994, in Montana. Her father, Paul Qualley is a model, musician, and rancher and her mother Andie MacDowell is an actress and model.

She is the granddaughter of known businessperson Marion St. Pierre MacDowell and Pauline Johnston, a writer, and teacher. They are her maternal grandparents.

Since her mother and father were in showbusiness, Margaret was exposed to the world of glamour at a very young age. Along with her sister, she debuted in Paris at Bal des debutantes. In 2008, she studied dance at the North Carolina School of Arts.

In 2011, having moved to New York to focus on her career as a model, Margaret walked for Alberta Ferretti during the New York Fashion Week.

She rose to fame quickly and has appeared in magazines including Vogue, Nylon, W, Vanity Fair, and Teen Vogue. She currently works for IMG Models and Uno Models Barcelona. In 2013, she appeared in her first movie ‘Palo Alto’.

The year 2017 was a major year in Margaret’s career as two of her movies premiered at the 2017 Sundance Film Festival. She played Alexandra in the movie ‘Sidney Hall’ and the role of Sister Cathleen in ‘Novitiate’.

As of February 2023, Margaret Qualley’s net worth is $3 Million.

Here are some of the best highlights of Margaret Qualley’s career:

“The Leftovers’ takes place three years after 2% of the population has gone missing. And it’s about how that changes society. Cults form as a result, and it drastically changes home life for a lot of people, including the Garvey family, which is the family I belong to.” – Margaret Qualley

“I left home at 15 to go to the North Carolina School of the Arts. Margaret Qualley Home School Go Left I like a bohemian floral dress, but then I’ll throw on a leather jacket or a pair of lace-up boots to give it an edge. My mom is always trying to get me to wear really sweet clothes. Something pink. But that’s not really my look.” – Margaret Qualley

“Ballet, there’s a right way to do things, and it’s black and white, and it’s all striving for perfection. Acting is not that way. It’s very gray, and the messier you can be, the better. The mistakes that you make are gold and beautiful stuff.” – Margaret Qualley

“I went to the Professional Children’s School in New York, and I started modeling because I could do that until I actually figured out what I wanted to do, and it gave me the opportunity to travel.” – Margaret Qualley

“I was actually super, super lucky. It was my first major audition. When I came out, the casting director was kissing me on the face, and I was like, ‘Oh, that’s probably a good sign.” – Margaret Qualley

Now that you know all about Margaret Qualley’s net worth, and how she achieved success; let’s take a look at some of the lessons we can learn from her:

Everybody needs beauty as well as bread, places to play in and pray in, where Nature may heal and cheer and give strength to body and soul alike.

2. You Need To Be Happy If You Wanna Make Others Happy

You will never be who you want to be until you are happy with who you are.

How much is Margaret Qualley worth?

Margaret Qualley’s net worth is estimated to be $3 Million.

How old is Margaret Qualley?

How tall is Margaret Qualley?

Qualley is best known as the daughter of the Vogue model, Andie MacDowell.

Margaret recently grabbed the spotlight for appearing in the Netflix series, ‘Death Note’ as Mia Sutton. She is also known for her role as the daughter of Justin Theroux’s character in HBO’s TV series, ‘The Leftovers’.

As of February 2023, Margaret Qualley’s net worth is approximately $3 Million.

What do you think about Margaret Qualley’s net worth? Leave a comment below.