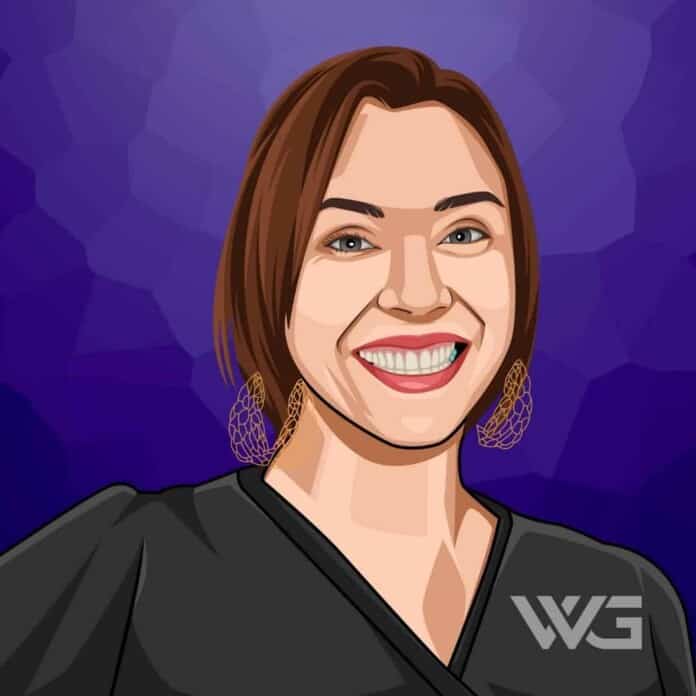 What is Stephanie Courtney’s net worth?

As of November 2022, Stephanie Courtney’s net worth is approximately $6 Million.

Stephanie Courtney is an American actress and comedian from New York.

She is best known to star on several television series, including the voices of Renee the Receptionist and Joy Peters on the Adult Swim comedy ‘Tom Goes to the Mayor’, Marge on the AMC drama ‘Mad Men’; and Diane on the ABC comedy ‘Cavemen’.

Stephanie Courtney was born on the 8th of February, 1970, in Stony Point, Rockland County, New York.

Courtney is the youngest of three children. In 1992 she graduated from Binghamton University with a degree in English, where she had played Elizabeth Proctor in The Crucible.

After graduation, she moved to New York City, where her roommate was a future author and columnist Meghan Daum. While working as evening secretary for Smith Barney chairman Robert S. Greenhill, Courtney studied acting at the Neighborhood Playhouse.

After she worked as an evening secretary, she moved to Los Angeles and roomed with her sister, actress Jennifer Courtney.

The two sisters wrote and performed the sketch ‘Those Courtney Girls’ in LA and at the Aspen Comedy Festival. She worked in catering to support herself during her early time in Los Angeles.

Stephanie debuted her film career from the film ‘Sweet Bird of You’ in 1998. She portrayed the character Kate in the film. In the same year, she appeared as a waitress in the television series ‘Mr. Show with Bob and David’.

Here are some of the best highlights of Stephanie Courtney’s career:

“I was a switchboard operator in the first season of ‘Mad Men.’ I was the oldest and bitterest. Stephanie Courtney Men Mad First Season I was never tortured over whether I wanted to become an actor. There was never another option in my mind.” – Stephanie Courtney

“‘What are your hobbies?’ I say, ‘I’ve been doing shows ever since I was a kid.’ When I left college, all I wanted to be was a musical theater chick. I auditioned tons. It just didn’t pan out.” – Stephanie Courtney

“I landed about one a year. Just enough to make me question the gas money and all the driving in rush hour. When you audition for commercials, it’s a lot of driving. What I netted wasn’t exactly matching the hours I was putting in. I figured I’m not a face that makes people want to buy Lysol. Then I auditioned for Progressive.” – Stephanie Courtney

Now that you know all about Stephanie Courtney’s net worth, and how she achieved success; let’s take a look at some of the strongest lessons we can learn from her:

1. Focus Only On The Present

Stop regretting the past. Stop worrying about the future. Focus on the present. Focus on the now. Feel the sun on your face. Feel the wind behind on your back. Hear the wind as it blows the tree branches. Dig your toes into the sand. Listen when people talk.

2. Listen to Your Body

When you’re exhausted, don’t fight it. Take a nap or sleep. When you feel stressed out, take a break. When you feel sick from eating that 10th donut, well, maybe you shouldn’t have done that. Learn to listen to the signals in your body and respond in the right way.

Mistakes happen. Don’t drill on it. Life isn’t perfect. Think of any issues you run into as “speed bumps” – they make the ride a little uncomfortable but you’ll get through it.

How much is Stephanie Courtney worth?

Stephanie Courtney’s net worth is estimated to be $6 Million.

How old is Stephanie Courtney?

Stephanie Courtney was born on February 8, 1970, and is currently 52 years old.

How tall is Stephanie Courtney?

Stephanie Courtney is an American actress and comedian who is best known for portraying “Flo” in a series of commercials for Progressive Insurance. She has also worked for brands such as Skittles, General Mills cereal, and Wienerschnitzel.

As of November 2022, Stephanie Courtney’s net worth is estimated to be $6 Million.

What do you think about Stephanie Courtney’s net worth? Leave a comment below.

Introduction  Giorgio Armani is an Italian fashion designer from Piacenza,...