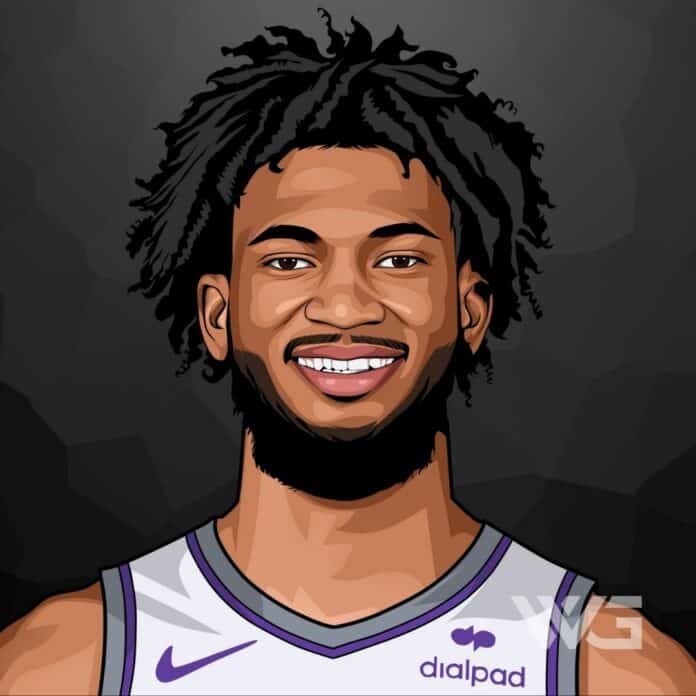 What is Marvin Bagley III’s net worth?

Marvin Bagley III is an American professional basketball player who was originally drafted by the Sacramento Kings in 2018.

He has since been traded to the Detroit Pistons, where he has quickly become one of the most popular players on the court.

Since his career is still fairly new, we can expect to see much more from him in the future as he continues to build his wealth.

As of January 2023, Marvin Bagley III’s net worth is estimated to be $14 Million.

Growing up, Marvin attended Corona del Sol High School as a freshman, after which he transferred to Hillcrest Prep in Phoenix, Arizona, for his sophomore year.

He transferred once again in 2016 to Sierra Canyon School in Chatsworth, California, but he was unable to play basketball there as a junior due to California Interscholastic Federation rules.

As a senior, however, he averaged 24.9 points per game and was named to the All-USA Today First-team in 2017.

Before graduating, he was ranked as the No. 1 recruit and No. 1 power forward of the 2017 class, and he decided to attend Duke University and play college basketball for them.

He made his debut at Duke University against Elon University, scoring 25 points during his first game.

By the end of the season, he was named a member of the All-ACC First Team and the ACC Rookie of the Year.

Marvin Bagley III was selected second overall by the Sacramento Kings in the 2018 NBA draft, and during his debut game, he scored 6 points and 5 rebounds in 12 seasons.

The following season, he scored a career-high 28 points, though the Kings ultimately lost 123-121 to the Brooklyn Nets.

He played 13 games in 2019 before being suspended due to the pandemic and later sustained a foot injury that forced him to miss the remainder of the season.

In February 2022, Bagley was traded to the Detroit Pistons, and he made his debut for them in a game against the Washington Wizards.

Bagley then re-signed with the Pistons in July 2022 for three years and $37.5 million.

Marvin Bagley III may not currently be as wealthy as Paul George or Joel Embiid, but he has certainly done well for himself overall.

While he isn’t the highest-paid player in the NBA, his annual average salary is definitely impressive.

Although he isn’t one of the richest NBA players in the world right now, this may very well change given his impressive annual earnings.

We definitely expect to see his net worth rise significantly as he continues his successful career as a professional basketball player with the NBA.

Marvin Bagley III is rumored to be dating Rissah Lozano, a volleyball player from Master’s University.

Outside of basketball, Bagley is a rapper and hip-hop artist who is known for creating music and writing his own raps in his spare time.

Like John Wall and Derrick Rose, Marvin Bagley III has earned many awards and honors during his career.

Although he has many achievements under his belt, we’ve chosen to highlight some of the most important.

Here are some of Marvin Bagley III’s greatest career accolades and honors:

While these are only a few of the honors he has won, they are the most important so far overall.

As he continues his career, we wholly expect to see him bag many more awards and achievements due to his remarkable skills.

How Does Marvin Bagley III Spend His Money?

While Marvin Bagley III has earned a substantial net worth during his career, he has kept his spending habits on the low down.

We can easily see him owning one of the most expensive Lamborghinis in the world, but so far, nothing has been confirmed.

That said, we do know that he must currently be living in the Detroit area, given that he is playing for the Pistons, but no info about his exact home or the cost has been made public.

If any new information becomes available about how Marvin Bagley spends his money, we will be the first to let you know. So make sure to check back often!

He may not have been playing as long as Chris Bosh, but he has still experienced many impressive milestones.

However, some moments in his career stand out more than others, and we’ve chosen only the most significant ones from his career.

Here are some of the best highlights of Marvin Bagley III’s career:

While he is no longer playing for one of the richest NBA teams, Bagley is still going very strong and reaching new milestones every season.

In a few years, we may very well see him become as well-known as Dwayne Wade if he continues playing as well as he has.

There is a lot that we can learn from Marvin Bagley III and his successful career as a professional basketball player.

Now that you know all about Marvin Bagley III’s net worth, we can take a closer look at what he can teach us about reaching our own goals.

Here are some of the best success lessons to learn from Marvin Bagley III:

Not everyone is a fan of teamwork, but it can be essential if you want to become successful.

Trying to achieve your goals by yourself can be nearly impossible, but if you have a good support network, you can relieve some of the stress of having to do everything yourself.

If you want to become successful, you have to stay consistent, both with your schedule and your work ethic, so that you can make tangible progress.

You’ll need to consistently work hard and give it your all if you want to stand out enough to get ahead, which is much easier said than done.

While Bagley has made a successful career as a professional basketball player, he is also a rapper and hip-hop artist.

Having multiple different skills that you can monetize can be a huge benefit if you want to move toward your goals as quickly as possible.

Marvin Bagley III has quickly become one of the most popular professional basketball players in the NBA, and his career is just getting off the ground.

While he isn’t yet the highest-paid athlete in the sport, with his skills, he may very well take that title in the future.

Make sure to check back often so that you won’t miss any updates on Bagley’s ongoing career and increasing fortune.

As of January 2023, Marvin Bagley III’s net worth is estimated to be $14 Million.

What do you think about Marvin Bagley III’s net worth? Leave a comment below.