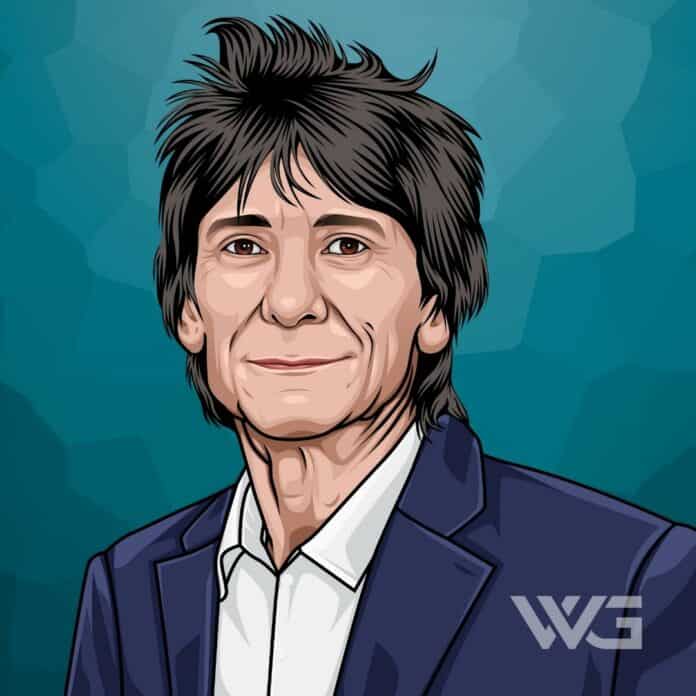 What is Ronnie Wood’s net worth?

Ronnie Wood is an English rock musician and visual artist known for his work with the iconic British rock band the Rolling Stones.

He’s collaborated with many iconic singers throughout his career while establishing himself as a painter worthy of international exhibitions.

Ronald David Wood was born 1 June, 1947, in Hillingdon, England, into a family of “water gypsies” who lived their lives traveling down canals on barges.

A skilled artist from a very young age, Wood moved from being a visual artist to musician and performed his first gig along with his father at the age of ten.

As a teenager, Wood was already earning an income from music through the band, The Birds, writing and playing guitar for their songs.

Wood attended Ealing College, where many of the era’s best musicians, including Pete Townshend and Freddie Mercury, cut their teeth in the business.

Following his time with The Birds, Ronnie Wood played for several bands, including The Creation and The Jeff Beck Group, before linking up with Mick Taylor and joining The Rolling Stones in the early 1970s.

Following the departure of Taylor, Wood took the reins along with Keith Richards and Mick Jagger, and the band soon became one of the music industry’s biggest names.

Over the years, the band sold over 200 million copies of their albums and singles and continues to draw annual royalties from physical media sales and other licensing deals.

Known for redefining British rock music, they are widely recognized as one of the most influential bands in music history.

While working with the Stones, Wood continued to collaborate with some of the richest singers in the world, working with Rod Stewart, Bob Dylan, Prince, and David Bowie over the years.

Outside of music, Ronnie Wood has made several appearances in movies and television shows, including the Jeremy Clarkson motor show, Top Gear.

In his later life, Wood has also returned to working as a visual artist, with the star co-owning the London art gallery Scream with his sons.

Ronnie Wood’s high-profile career both with the Rolling Stones and as a session musician for many other leading acts has allowed him to draw a consistently high salary.

His income at the peak of success for the Stones was notably lucrative, maintained by a steady stream of albums added to his discography.

Ronnie Wood’s legacy in the music industry has helped him become one of the richest rockstars in the world, reshaping the role of bass guitarist for generations.

His net worth growth over time reflects his maturation as an icon of rock and his expanded role working with Bob Dylan and Rod Stewart.

With ongoing royalties and reunions with the Rolling Stones generating additional revenue, his net worth is likely to experience additional growth in the future.

Ronnie Wood married his first wife, Krissy Findlay, in 1971, with whom he has six children, including fellow musician Jesse Wood.

He has been married several times since, notably to model Katia Ivanova and Sally Humphreys, who owns a theater production company.

Wood maintains a strong social media presence, updating fans on his performances through his official Instagram account, with over 700,000 followers.

Ronnie Wood has enjoyed many accolades and honors over his career, with many of the biggest awards coming through his association with the Rolling Stones.

He’s been added to multiple halls of fame lists and picked up major awards from the music industry’s most reputable organizations.

Here are some of the high-profile awards and accolades from Ronnie Wood’s career:

Wood is still active in the industry and collaborates with other artists on new projects, so this list of achievements will likely continue to grow.

How Does Ronnie Wood Spend His Money?

With his outstanding net worth and earning capacity, Ronnie Wood has been able to invest in some of the most expensive houses in the world, notably a castle in the UK.

The estate covers 2.31 acres of lawns, with Gothic architecture features throughout the home’s nine bedrooms and bathrooms.

In addition to the castle, the estate also includes its own cottage, lodge, pool house, and wine cellar.

Ronnie Wood’s career spans several decades and counting, including collaborations with many successful musicians and his close involvement with the Stones.

He’s performed at many of the world’s most iconic venues while also impressing critics for his work as a visual artist.

Here are some of the best highlights of Ronnie Wood’s career:

Wood continues to work as an artist and musician on exciting new projects, with many more high points and successes likely to come.

Ronnie Wood has shared many insights into his life and experiences with the Rolling Stones over the years and the core influences on his playing style.

He has also reflected on his journey as a visual artist and painter and how this played a role in his fortunes.

Here are our favorite quotes from Ronnie Wood:

Now that you know all about Ronnie Wood’s net worth, we’ll dive into some of the ways his life experiences and music career can inspire our own creative activities.

Here are some of the best success lessons to learn from Ronnie Wood:

1. Poverty Is No Barrier To Success

Growing up on a council estate in London didn’t deter Ronnie Wood from pursuing his dreams and becoming one of the most celebrated guitarists of his generation.

He took advantage of the local music scene to learn his craft and build connections and relationships.

2. Work With What You’ve Got

In his early career, Wood rehearsed with his band in a garage and went to gigs in a beat-up wagon, proving you don’t need high-end equipment to make it in the business.

With his reputation as a hell-raiser and heavy consumption of drink and drugs, Wood realized it would inevitably backfire sooner or later.

When he started developing bad moods, he cut back on the substances and went into rehab.

That wraps up this complete guide to Ronnie Wood’s impressive career as a bass guitar player for some of the biggest bands in the business.

Wood’s ongoing commitment to creative endeavors as a musician and artist means his net worth will continue to climb in the coming years.

To ensure this article reflects the most accurate information, we’ll update it in the future, so make sure you bookmark it and check it out again.

What do you think about Ronnie Wood’s net worth? Leave a comment below.