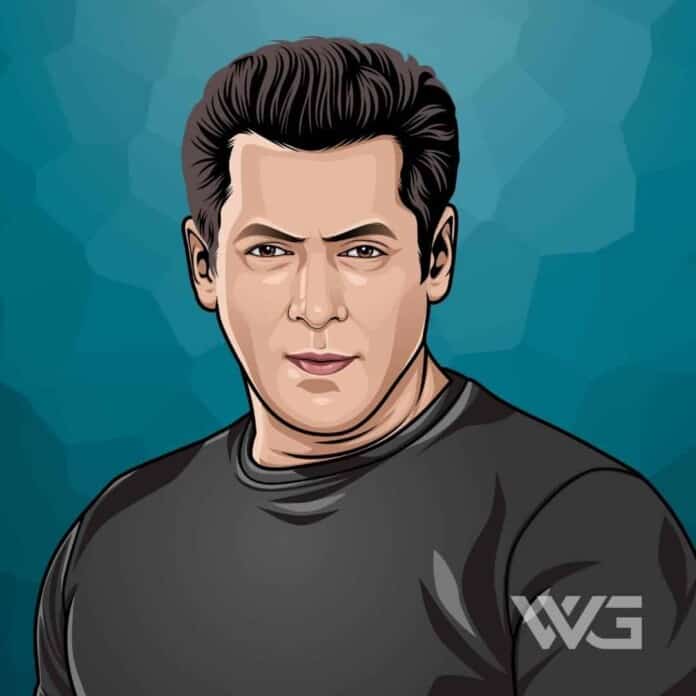 What is Salman Khan’s net worth?

Salman Khan is an Indian film actor, television presenter, and entrepreneur who has appeared in over 100 movies, many of which have broken huge box office records.

Ranked on the Top-Paid 100 Celebrity Entertainers list from Forbes in 2018, he’s also produced and hosted a series of popular television shows.

After attending The Scindia School and St. Stanislaus High School, he enrolled at St. Xavier’s College before dropping out to work as an assistant director in the Bollywood film industry.

After a few supporting roles, Khan appeared in the lead for Maine Pyar Kiya, which became one of the highest-grossing movies in India in the 1980s.

Like his fellow Bollywood actors such as Shah Rukh Khan and Sanjay Kapoor, Salman Khan has appeared in movies spanning various genres over the course of his career.

He’s also a regular on Indian television shows, appearing in and producing shows including The Kapil Sharma Show and Nach Baliye 9 through his production house, Salman Khan TV.

Outside of his career in the film industry, Khan has served as a brand ambassador for Suzuki, responsible for some of the most expensive motorbikes in the world, as well as other brands such as Pepsi.

With a prolific career as a Bollywood superstar, Salman Khan has been able to command high fees for his movie and television appearances.

Known for appearing in multiple movies each year, this has helped ensure his annual career earnings remain consistently high.

While Salman Khan isn’t quite as wealthy as the richest people in India, his net worth has continued to grow as his career has developed.

Here’s a breakdown of Salman Khan’s annual net worth:

Between 1999 and 2001, Khan dated Bollywood actress Aishwarya Rai and has also dated actresses such as Sangeeta Bijlani, Katrina Kaif, and Somy Ali.

Since 2012, Salman Khan has been in a relationship with Iulia Vântur, a Romanian actress, model, and famous singer.

In 2002 he was arrested for driving his car into a bakery while intoxicated, avoiding a five-year sentence in prison after his sentence was suspended.

Salman Khan has been nominated for and been the recipient of numerous awards and accolades over the course of his career.

Here are some highlights from Salman Khan’s career:

How Does Salman Khan Spend His Money?

Salman Khan is well known for his luxurious lifestyle and owns some of the most expensive houses in the world, including spacious apartments in Mumbai’s Bandra neighborhood and a farmhouse in Panvel.

To celebrate his 50th birthday in 2016, Khan gifted himself one of the most expensive yachts in the world, replacing an older yacht he’d purchased in 2009.

Salman Khan has been active in the film and television industry since the 1980s, and with over a hundred roles to his name, there are plenty of noteworthy high points.

Here are some of the best highlights of Salman Khan’s career:

Salman Khan has been interviewed on many occasions over the course of his career to discuss life as an actor and television presenter.

His insights into his craft and broader observations on life and relationships have been inspirational for his millions of fans.

Here are our favorite quotes from Salman Khan:

Now that you know all about Salman Khan’s net worth let’s take a look at some of the valuable lessons we can take from his experiences.

In addition to his acting career, Khan has invested time and effort in philanthropy and mentoring aspiring Indian actors to achieve their goals.

Here are some of the best success lessons to learn from Salman Khan:

1. Don’t Let Yourself Be Put Off By Negative Comments

With over 100 movies to his name, it’s inevitable that some of these are going to be critical and commercial failures.

Khan isn’t put off giving it his all even when critics put him down, preferring to carry on and persevere regardless.

2. Discover Your Strengths In Your Weaknesses

Just as critical failures can be breeding ground for growth, so too can your weaknesses be opportunities to learn how to develop new strengths.

3. Show Respect For Other People’s Beliefs, Whether It’s Religious Or Political

Growing up in a household with Muslim and Hindi people taught Khan the importance of respecting everyone’s beliefs, regardless of whether you share them.

His upbringing taught Khan to celebrate Ganesh Utsav, Eid, and Christmas with the same degree of respect and appreciation.

That concludes this overview of Salman Khan’s net worth, covering his prolific career as a Bollywood star and prime-time Indian television host.

His movies have earned millions of dollars at the box office, making him a household name in India.

With his career ongoing to this day, his net worth will continue to grow, so be sure to check back here for our updates, bringing you the latest information.

What do you think about Salman Khan’s net worth? Leave a comment below.