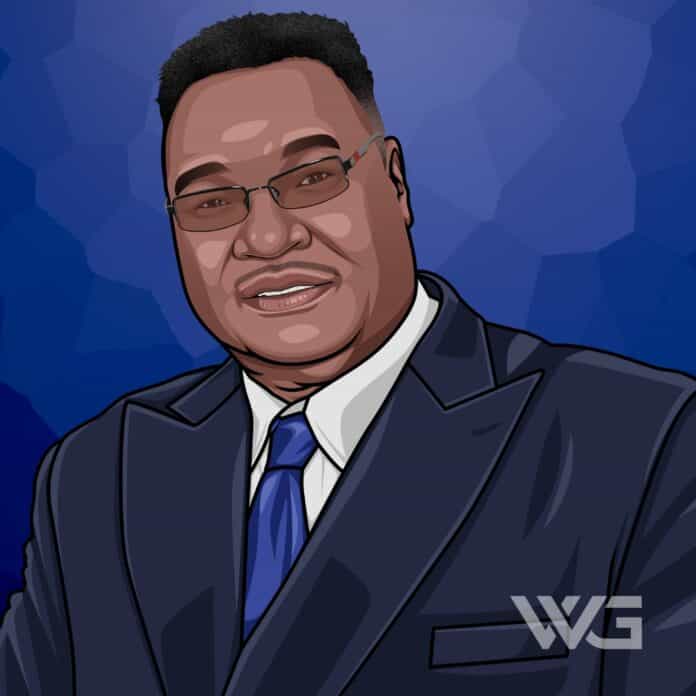 What is Larry Holmes’ net worth?

Larry Holmes, also known as “The Easton Assassin”, is a retired professional boxer with a net worth of $18 million.

He fought against many of the top heavyweight boxers from the 1970s to the late 1990s such as Muhammad Ali and Joe Frazier, who he also used to spar with regularly.

Holmes is known as one of the greatest heavyweight boxers of all time and, after his retirement, invested in many small companies, providing locals with over 200 jobs.

He was the fourth child born to John and Flossie Holmes, out of a total of 12 children. His father left the family and traveled to Connecticut to work as a gardener to support them, coming back to see them every three weeks.

To support his family, Larry dropped out of school in the seventh grade to work at a car wash for $1 an hour and then drove a dump truck to make ends meet.

Surprisingly, Larry Holmes only began boxing when he was 18 years old and, over the following 5 years, recorded an amateur record of 19 wins and 3 losses.

After seeing that he was able to handle himself against the best in the heavyweight division, he realized that he could compete against them.

In March 1978, when he took on Earnie Shavers, he made his debut as a real contender. Twelve rounds and a unanimous decision later, Larry emerged victorious.

This victory prepared him for a WBC Heavyweight match against champion Ken Norton on June 9 in Las Vegas. The battle lasted 14 rounds, with seven rounds scored evenly for each, but Holmes would come back to win in the last round.

He surpassed Joe Louis, who had 25 wins, to become the second most successful athlete in the sport with his 20 successful title defenses.

After losing a rematch to Michael Spinks in 1986, Holmes announced his retirement, but he later made several comebacks.

Larry Holmes would receive almost $8 million to take on Muhammad Ali in what is likely his most illustrious title contest and Holmes’ victory was Ali’s only career stoppage.

The large paydays continued even after his “retirement” and in 1988, Larry Holmes was persuaded to return to the ring by Don King with a $2.8 million promise to fight Mike Tyson in a brutal match of champions.

For $7 million, Holmes accepted a fight with Evander Holyfield in 1992 which he won.

A match between Holmes and George Foreman that was scheduled for January 23, 1998, was postponed.

However, the non-refundable 10% of each fighter’s prize was theirs to keep, earning Holmes $400,000 in total.

In an unusual and at times surreal career, Larry Holmes spent more than 3 decades in the ring, fighting the best fighters of his day.

It is not possible to estimate Larry Holmes’ current annual income as he has been retired for some years and his business dealings are private.

However, what we can tell you is that he was careful to invest his winnings in a variety of businesses that provided jobs for more than 200 people in his hometown.

Larry Holmes retired in 1998 and returned to live in Easton, where he had invested in a variety of businesses.

Larry Holmes’ net worth in 2022 is estimated to be in the region of $18 Million. However, there is no way to independently verify this as his financial affairs are private and available for the public to see.

What we do know is that he invested his winnings from his 3-decade-long career in high-value projects and real estate that has risen in value over the years.

In 1979, Larry Holmes wed Diane Robinson, and the couple had two children. He also has three daughters from two of his earlier unions.

Mark Holmes, Larry’s younger brother, was a middleweight boxer who competed from 1980 to 1987.

Harry owns a home near Easton in Palmer Township, Pennsylvania, on Sheridan Drive, where he and his wife live in a house worth over $1.7 million.

Larry Holmes held every major heavyweight title belt throughout his career and defended them against the most dangerous fighters of his time.

There are very few fighters in the history of boxing who can boast of the skill and sheer power that Larry Holmes wielded in the ring.

Here are a few of the most significant events in Larry Holmes’ career:

Larry Holmes was always concerned about the money that he would earn from each fight and risked losing his title to secure a better payday.

He chose to fight Marvis Frazier rather than defend his WBC Heavyweight title as he was offered more money to fight Frazier.

How Does Larry Holmes’ Spend His Money?

Holmes returned to his hometown of Easton after officially retiring, where he has since made himself and his family a comfortable home.

With the money he made through his boxing career, he has invested in several different businesses.

His business interests include a $5 million office building, a $2 million restaurant, an $8 million hotel, a nightclub, casino machines, and more.

He’s also hired more than 200 individuals from his hometown and provided much-needed employment.

Additionally, he co-hosts the television chat show “What the Heck Were They Thinking?”

The sheer quantity of fights that older champions agreed to is astounding by current standards. At times Larry fought two or even three top-flight boxers in the same year.

However, after more than 30 years in the ring, Larry knew it was time to call a halt to his fighting days.

Here are some of the best highlights of Larry Holmes’ career:

After 3 decades in the ring, Larry called it quits after winning the last four fights of his career.

Age had caught up with Larry and he knew that it was time to call it a day before he got seriously injured in the ring.

From a penniless childhood to becoming extremely wealthy, Larry Holmes remained the same down-to-earth man he always was.

Money didn’t change him and he was always looking for ways to help the people in his hometown improve their lives.

Here are our favorite quotes from Larry Holmes:

Larry Holmes came from an extremely poor family who knew what it meant to experience hardship.

However, Larry’s dad taught him to work hard and weigh up his options before doing anything.

Now that you know all about Larry Holmes’ net worth, here are some of the best success lessons to learn from Larry Holmes:

Larry Holmes never had it easy and from a young age he had to help support his family.

He is no stranger to hard work and he feels that if you want to get something done, then hard work is what will get you there.

It is important to set goals and then go about making sure that you achieve them.

Then, after you have succeeded, look back and see if there are others that you might help to achieve what you have accomplished.

3. Are You Willing To Pay The Price?

Larry always asked himself if he was willing to pay the price before he did something.

Because, before you do anything, you have to ask yourself if it is worth the price you have to pay to get what you want.

Larry Holmes is one of the greatest boxing champions of all time and defeated legends like Muhammad Ali, Marvis Frazier, Earnie Shavers, and Mike Weaver.

He currently maintains the intriguing distinction of having the longest individual heavyweight title-winning run in boxing’s modern era.

Larry Holmes is one of only five fighters to have ever defeated the world’s greatest boxer, Muhammad Ali.

Holmes will be remembered as one of boxing’s finest fighters, retiring in the early 2000s with 69 victories and 6 defeats and spending three decades in the ring.

What do you think about Larry Holmes’ net worth? Leave a comment below.