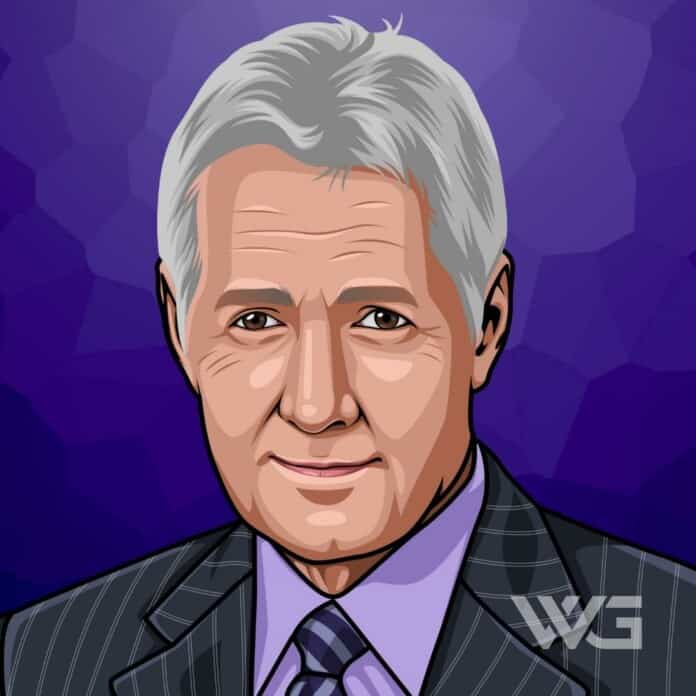 What is Alex Trebek’s net worth?

Trebek is probably best known for being the host of the game show ‘Jeopardy’ for 37 seasons. He has also hosted several other game shows such as ‘The Wizard of Odds,’ ‘Double Dare,’ ‘High Rollers,’ ‘Classic Concentration,’ and ‘To Tell the Truth.’

At his time of passing, Alex Trebek’s net worth was estimated to be roughly $75 Million.

Trebek is the son of George Trebek, who had emigrated from Ukraine, and Lucille Marie Lagace.

Trebek grew up in a French-English household, and his first job was when he was 13 years old. He attended Sudbury High School and then went on to attend the University of Ottawa.

He hosted ‘CBS’ game show ‘Double Dare,’ which turned out to be his only game show with the ‘CBS’ network. He then started his journalistic career as a newscaster and sportscaster with the ‘CBC’ channel.

In 1973, he moved to the U.S to pursue his hosting career. His first job in the U.S was to host the ‘NBC’ game show ‘The Wizard of Odds.’

Trebek began hosting ‘Jeopardy!’ in 1984, a unique game show in which the contestant is provided with clues to form different answers.

He created history when he became the first person in American history to host three games simultaneously in 1991. In 2005, he appeared on ‘Celebrity Poker Showdown.

At his time of passing, Alex Trebek’s net worth was $75 Million.

How Did Alex Trebek Spend His Money?

Alex Trebek was not a celebrity who often revealed details of his personal life. Although he was the host of ‘Jeopardy’ for more than three decades, the viewers knew him only from his appearances as the show’s host.

Before Trebek passed away, he lived in Los Angeles, and his home is a 10,000 square foot mansion that he purchased for $2.15 million.

Trebek bought a mountain in 1990. He bought 35 acres of land at the top of the Hollywood Hills for $1.5 million. Back then, he planned to build his dream home.

Here are some of the best highlights of Alex Trebek’s career:

“When you’re in your 30s and actively pursuing a career and a home life, a wife and children, you’re busy doing as opposed to busy thinking. As you get older, even as you don’t have as much time, I think you tend to think more and reflect more on what is happening in your own life.” – Alex Trebek

“Merv Griffin, who developed Jeopardy! and Wheel of Fortune, had a great line once. I used to answer all the mail that came into Jeopardy personally! Whether it was favorable or unfavorable, and Merv said, You know how I handle the nasty mail? I said no. He just grabbed it and folded it up and crunched it up, and threw it in the wastebasket. He said I don’t bother with it.” – Alex Trebek

“My dad drank pretty heavily, and he never missed a day of work in his life. So I never looked at drinking as a serious problem, but drugs are a serious problem. I think it’s a generational thing. I think older people don’t feel as uncomfortable around drinkers as they do around dopers.” – Alex Trebek

“People ask me, How would you do as a contestant on the show? And I tell them I would do fairly well among senior citizens, but I would have trouble against a good thirty-year-old because I cannot recall information as quickly as I used to. You used to say something, and I would go, boom, right away, very sharp. Now it’s like, Oh, yes, but wait a minute, uh, uh…” – Alex Trebek

“Have you ever met a successful person who wasn’t restless- who was satisfied with where he or she was in life? They want new challenges. They want to get up and go…and that’s one of the reasons they’re successful.” – Alex Trebek

Now that you know all about Alex Trebek’s net worth and how he achieved success; let’s take a look at some of the best lessons we can learn from him about life:

1. Don’t Take Yourself Too Serious

Take your job seriously, but don’t take yourself too seriously.

If you can’t be in awe of Mother Nature, there’s something wrong with you.

3. Don’t Be Afraid of Silence

It’s essential in life to know when to shut up. It would be best if you were not afraid of silence.

Alex Trebek was the host of the popular game show ‘Jeopardy!’.

Trebek has hosted many other shows such as ‘Pitfall’ and ‘The Wizard of Odds.’ He hosted the Canadian quiz show ‘Reach for the Top’ for seven years before moving to the U.S to further his career. After hosting ‘Jeopardy!’ he won several ‘Daytime Emmy Awards.’

At his time of passing, Alex Trebek’s net worth was estimated to be roughly $75 Million.

What do you think about Alex Trebek’s net worth? Leave a comment below.