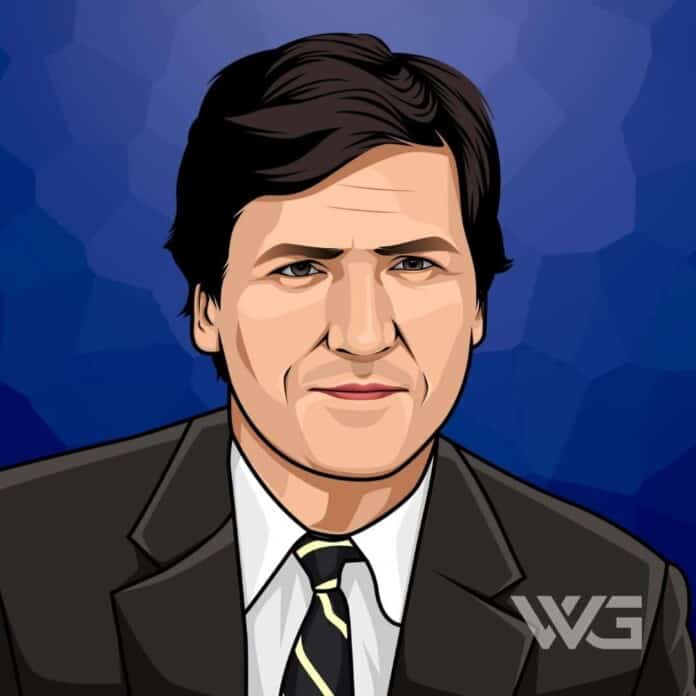 What is Tucker Carlson’s net worth?

As of February 2023, Tucker Carlson’s net worth is estimated to be roughly $30 Million. Tucker Carlson is an American conservative political commentator who has hosted the nightly political talk show ‘Tucker Carlson Tonight’ on Fox News since 2016.

Carlson became a print journalist in the 1990s, writing for the magazine The Weekly Standard, among others.

Tucker Swanson McNear Carlson was born on the 16th of May, 1969, in California. He is the elder son of Richard Warner Carlson, a former “gonzo reporter” who became the director of the Voice of America.

Carlson’s paternal grandparents were Richard Boynton and Dorothy Anderson, teenagers who placed his father in an orphanage where he was adopted when he was two years old by the Carlsons – a wool broker and his wife.

In 2000, Carlson co-hosted the short-lived show The Spin Room.

Carlson had an exchange with Jon Stewart, host of The Daily Show on Comedy Central in 2004. Stewart argued that Carlson and the nature of Crossfire were harmful to political discourse in the United States.

In January 2005, CNN announced they were ending their relationship with Carlson and would soon cancel Crossfire. CNN chief Jonathan Klein told Carlson on January 4, 2005, that the network had decided not to renew his contract.

In July 2006, he reported live for Tucker from Haifa, Israel, during the 2006 Lebanon War between Israel and Hezbollah in southern Lebanon.

While in the Middle East, he also hosted MSNBC Special Report: Mideast Crisis. He appeared regularly on Verdict with Dan Abrams as a panelist in political discussions.

Here are some of the best highlights of Tucker Carlson’s career:

“Some white people are privileged, some aren’t. Some black people are, some aren’t. It strikes me as, by definition, a racist attack in that it’s making a generalization – a negative one – based on skin color.” – Tucker Carlson

“I was up late last night yapping about the elections on CNN and up early this morning doing the same thing in my daughter’s kindergarten class.” – Tucker Carlson

“Speaking fluent English – like doing long division or successfully rewiring a 220-volt electrical outlet – is not a skill you’re born with. It’s something you learn, occasionally even by opening some old dictionary.” – Tucker Carlson

“Trump is, in part, a reaction to the intellectual corruption of the Republican Party. That ought to be obvious to his critics, yet somehow it isn’t.” – Tucker Carlson

Now that you know all about Tucker Carlson’s net worth, and how he achieved success; let’s take a look at some of the strongest lessons we can learn from him:

1. Learn To Feel Through Life

Thoughts about people, places, things fade over time, but feelings regarding those things stay with us forever. So cherish those feelings as they come.

2. Write Down Everything You Love

Write down everything so you don’t forget it and you can revisit it in the future.

3. You Are The Only Person Who Can Bring Yourself Happiness

No one else can do it for you: no boyfriend or girlfriend, no amount of money, no material things, no job. Happiness is the house you build within yourself.

How much is Tucker Carlson worth?

Tucker Carlson’s net worth is estimated to be $30 Million.

How old is Tucker Carlson?

How tall is Tucker Carlson?

Tucker Carlson is a political commentator and TV personality who has earned his net worth mostly through his work as a television pundit. His father was an LA news anchor and ambassador to Seychelles named Richard Warner Carlson.

As of February 2023, Tucker Carlson’s net worth is approximately $30 Million.

What do you think about Tucker Carlson’s net worth? Leave a comment below.