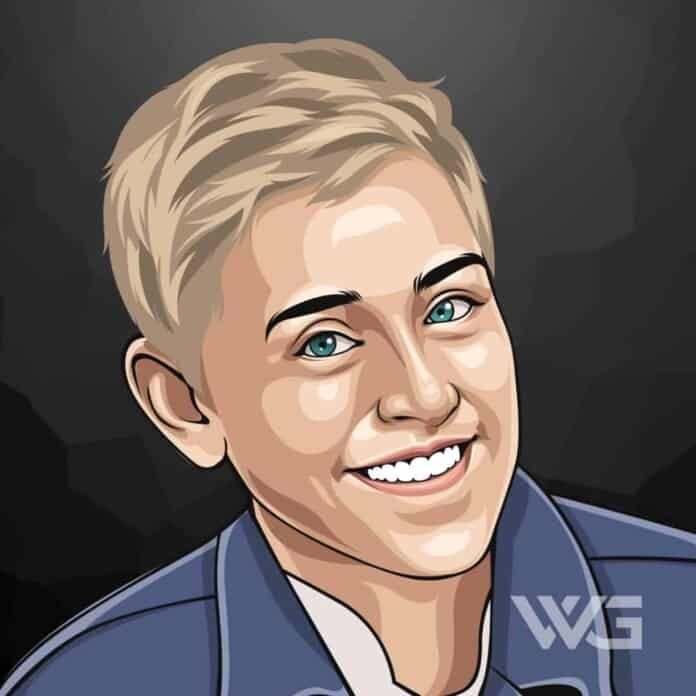 What is Ellen DeGeneres’ net worth?

As of September 2022, Ellen DeGeneres’ net worth is approximately $500 Million. Ellen is one of the most well-known comedians of our time and has grown her success within the last decade through her talk show The Ellen Degeneres Show. Through the many years that the show has been on the air, it has won over 80 awards.

Besides being a comedian Ellen is also a writer, producer, and actress and in 2021, Ellen DeGeneres’ net worth is approximately $500 Million.

Ellen DeGeneres was born in Metairie, Louisiana on the 26th of January, 1958. When she was a teenager, her parents divorced.

Not long after, Ellen dropped out of college and began working numerous random jobs to make ends meet. She worked as a waitress, bartender, and hostess before she found her true calling as a stand-up comedian.

In the 1980s she began traveling and doing comedy and the network ‘Showtime’ titled her as the ‘Funniest Person in America’.

In 1986 she was invited to make an appearance on ‘The Tonight Show Starring Johnny Carson’ and soon after she gain a lot more recognition and her career really took off.

She was featured on sitcoms including ‘Open House’ and ‘Laurie Hill’ and worked on the films ‘Ellen’s Energy Adventure’ and ‘Coneheads’ and was later asked to be on what would become her very own show ‘These Friends of Mine’.

This led to the beginning of her next television sitcom, ‘The Ellen Show’, but it came to a close quickly because of its low ratings.

In 2003 Ellen debut her most successful endeavor yet, ‘The Ellen Degeneres Show’ which has aired about 15 seasons and over 2,000 episodes and has won numerous awards.

She has also been presented many awards for her voice over for the character Dory in ‘Finding Nemo’.

Here are some of the best highlights of Ellen DeGeneres’ career:

“You just have to keep driving down the road. It’s going to bend and curve and you’ll speed up and slow down, but the road keeps going.” – Ellen DeGeneres

“Be open to learning new lessons, even if they contradict the lessons you learned yesterday.” – Ellen DeGeneres

“We need more kindness, more compassion, more joy, and more laughter. I definitely want to contribute to that.” – Ellen DeGeneres

“Find out who you are and be that person. Find that truth, live that truth, and everything else will come.” – Ellen DeGeneres

“If standing up for what I think is right makes me an activist, then I’m an activist. – Ellen DeGeneres

“It is the failure that gives you the proper perspective on success.” – Ellen DeGeneres

View our larger collection of the best Ellen DeGeneres quotes!

3 Rules for Success from Ellen Degeneres

Now you know all about Ellen DeGeneres’ net worth, and how she managed to achieve great success; here are some of the best success lessons to be learned from DeGeneres:

1. Failure is part of the success

Many of us will experience failure at one point or another, and failure is part of becoming successful. It helps you grow and gain perspective.

2. Don’t let anything stop you from accomplishing your goals.

If you are truly committed and determined to accomplish your goals, then no obstacle should stop you. The best thing you can do for yourself is to keep moving forward and see what the future brings.

Only you can make those dreams comes true, and all those barriers are minuscule in the grand scheme of things.

Every day you learn something new, and keeping an open mind will let you discover and learn to appreciate new things that you could potentially benefit from in the end.

New things can bring progress and innovation to your life, which is why you shouldn’t dismiss an idea or concept just because it’s out of your comfort zone.

Ellen Degeneres is one of the most iconic and progressive women in Hollywood.

As of September 2022, Ellen DeGeneres’ net worth is approximately $500 Million and will most likely earn much more money in years to come as she continues to grow in her industry.

What do you think about Ellen DeGeneres’ net worth? Leave a comment below.