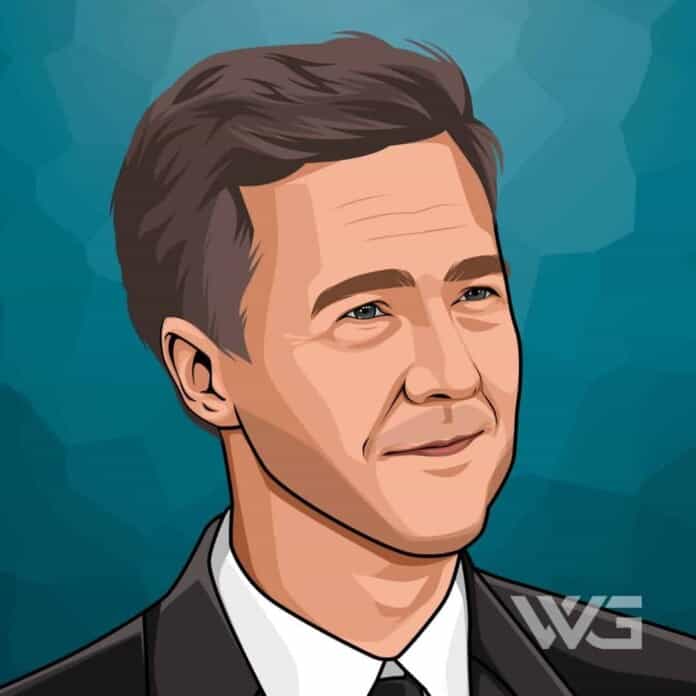 What is Edward Norton’s net worth?

Edward Norton is an American actor and filmmaker from Boston. He has received multiple awards and nominations including a Golden Globe Award and three Academy Award nominations.

Edward Harrison Norton was born on the 18th of August, 1969, in Boston, Massachusetts.

His father, Edward Mower Norton Jr., served in Vietnam as a Marine lieutenant before becoming an environmental lawyer and conservation advocate working in Asia and a federal prosecutor in the Carter administration.

His maternal grandfather, James Rouse, was the founder of urban planning enterprise The Rouse Company and co-founder of the real estate corporation Enterprise Community Partners.

After appearing in several Broadway productions, Edward Norton made his film debut with an important role in the 1996 crime thriller film ‘Primal Fear’. Directed by Gregory Hoblit, the film was a commercial success, earning nearly thrice its budget.

Norton was next seen in Woody Allen’s musical comedy film ‘Everyone Says I Love You’. Though the film was well-received by critics, it was a commercial failure.

He played the lead role in the 1998 crime drama film ‘American History X’. He received his second Oscar nomination in the category of ‘Best Actor’ for this role.

In the 2010s, he appeared in many successful films such as ‘Leaves of Grass’, ‘The Bourne Legacy’, ‘The Grand Budapest Hotel’ and ‘Birdman’.

Here are some of the best highlights of Edward Norton’s career:

“Most people don’t relate to and can’t generate concern for something they don’t encounter personally or feel personally affected by. People have to have the palpable negatives in their lives dissected for them in ways that let them understand the root causes of unhealthy, unhappy conditions in their lives and then be allowed to really see and feel the positive alternatives.” – Edward Norton

“Well, I don’t feel that I’ve played so many bad guys, and I’m rotting really drawn to villains per se. I think a lot of people relate to some of my characters’ inner struggles.” – Edward Norton

“Most of us still believe in the intrinsic value of nature, but I think the first century of the environmental/conservation movement demonstrated pretty clearly that this value cannot compel a civilization-wide shift toward sustainable behavior and enterprise when stacked up against the urgent economic and social needs of 7 billion people, most of whom are struggling to get out of poverty.” – Edward Norton

“I like it when the deeper you go with the character, the more you see the layers start to peel away.” – Edward Norton

“The “environmental movement” is becoming an economic movement, is joining the social justice movement, is becoming a sustainability movement. It’s leaving behind the “People’s Needs versus Nature’s Needs” conflict in favor of making the case for environmental health as the essential underpinning of prosperous and stable human civilization.” – Edward Norton

3 Lessons from Edward Norton and his movies

Now that you know all about Edward Norton’s net worth, and how he achieved success; let’s take a look at some of the lessons we can learn from him:

As humans, we have so much human potential. Yet, we waste it pointlessly. We waste it becoming consumerist slaves — except instead of chains, we wear golden Rolexes.

2. Life is About Pain and Sacrifice

Don’t be a slave to wanting an expensive car. In fact, it is cooler not to have a car. Also, consider, are you a slave to debt? Does debt have you working that job you hate, just so you can buy that next $30,000 car?

How much is Edward Norton worth?

Edward Norton’s net worth is estimated to be $300 Million.

How old is Edward Norton?

How tall is Edward Norton?

Edward Norton is an American actor and filmmaker known for his roles in movies, such as ‘Primal Fear’, ‘The Illusionist,’ and ‘The Incredible Hulk’. Norton is known for his environmental and social activism works as well.

What do you think about Edward Norton’s net worth? Leave a comment below.