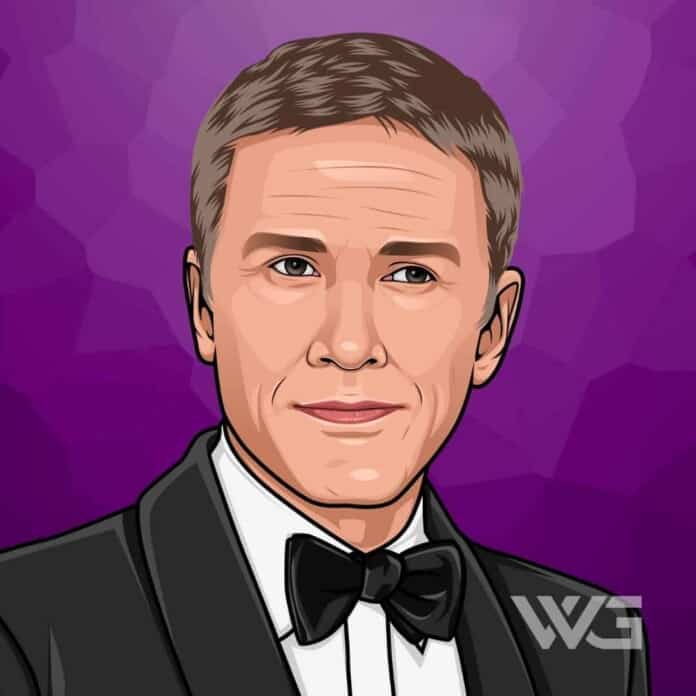 What is Christoph Waltz’s net worth?

Christoph Waltz is a well-known Austrian and German actor.

Waltz is the recipient of many accolades such as two Academy Awards, two British Academy Film Awards, two Screen Actors Guild Awards, and two Golden Globe Awards. He has mostly been active in the United States since 2009.

Christoph Waltz was born on the 4th of October, 1956, in Vienna.

Waltz is the son of Johannes Waltz and Elisabeth Urbancic. His father is a German set designer, and his mother is an Austrian costume designer.

His father died when he was 7 years old, and his mother later married a composer named Alexander Steinbrecher. Steinbrecher was married to the mother of director Michael Haneke, and as a result, Waltz and Haneke shared the same stepfather.

Waltz started to work as a stage actor in Zurich, Salzburg, Hamburg, Vienna, and Cologne after returning to Europe. In 1977, Waltz appeared in the movie ‘Der Einstand,’ and he then starred in 13 episodes of the series Parole Chicago’.

When it comes to movies, he has appeared in movies such as ‘Fire and Sword,’ ‘Wahnfried,’ ‘Our God’s Brother’ and ‘Love Scenes from Planet Earth’.

His performance in ‘Inglourious Basterds,’ earned him an Oscar, a Golden Globe, and several other awards. He also won another Academy Award for his next work in ‘Django Unchained.’

In 2015, Waltz portrayed Ernst Stavro Blofeld in the movie ‘Spectre.’

In 2016, he starred in ‘The Legend of Tarzan’ followed by ‘Tulip Fever’ and ‘Downsizing’ the following year. In 2020, it was announced that he had been cast in the series ‘Reagan & Gorbachev’ alongside Michael Douglas.

How Does Christoph Waltz Spend His Money?

One of the charities Waltz has helped is Montblanc Charity.

Here are some of the best highlights of Christoph Waltz’s career:

“Something that is very special today might not be special tomorrow, but to hold it, to grasp it, to keep it, to make it special, to elevate it from the ordinary, that’s when you open up the champagne. To make it sparkle.” – Christoph Waltz

“The villain is usually the most interesting part. But it has to be a smart thing. Just dumb cliche villains with a Russian accent and big muscles and a mean face, I don’t know. My Russian accent isn’t that great, and the muscles aren’t that big, and the mean face is not enough. You know what I mean? It gets very boring. Tedious stuff.” – Christoph Waltz

“I’ve done so many jobs because I’ve had to, not because I’ve wanted to. And it’s honorable to do a job because you need to feed your children, and maybe there is also something in it for your development as an actor. But only up to a point.” – Christoph Waltz

“Our hubris needs to be downsized, thinking that profiteering on Earth, on whatever level – environmentally, economically, culturally – is unlimited, and everybody should get as much as he wants, or she wants. Humans need to be shrunk again to their actual size.” – Christoph Waltz

“Everything that happens later in life is appreciated differently. You can appreciate the thing for what it is, which you couldn’t if you were 25 and had never experienced much else. You would take it all for granted and think that’s what life is like.” – Christoph Waltz

Now that you know all about Christoph Waltz’s net worth and how he achieved success; let’s take a look at some of the best lessons we can learn from him:

Something that is very special today might not be special tomorrow, but to hold it, to grasp it, to keep it, to make it special.

You get hit over the knuckles enough. You don’t stick them out anymore.

How much is Christoph Waltz worth?

Christoph Waltz’s net worth is estimated to be $30 Million.

How old is Christoph Waltz?

How tall is Christoph Waltz?

Christoph Waltz is an Austrian actor, writer, and director. Waltz holds German citizenship and has earned his amazing net worth through his American movies.

He has been acting for more than three decades. He earned his first taste of true international acclaim for his role as SS Colonel Hans Landa in the movie ‘Inglourious Basterds.’

What do you think about Christoph Waltz’s net worth? Leave a comment below.