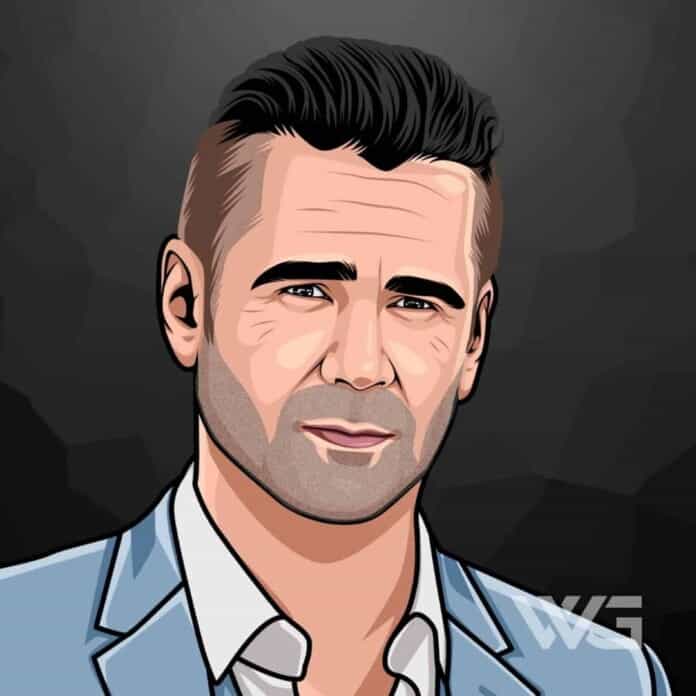 What is Colin Farrell’s net worth?

Colin Farrell is an Irish actor. Farrell first appeared in the BBC drama series ‘Ballykissangel’ in 1998.

He made his film debut in the drama movie ‘The War Zone.’ He played the outlaw Jesse James in the Western film ‘American Outlaws’ before he starred in the thriller film ‘Phone Booth,’ ‘S.W.A.T.’ and ‘The Recruit.’

Colin James Farrell was born on the 31st of May, 1976, in Dublin. Farrell is the son of Rita and Eamon Farrell. His father played football for Shamrock Rovers FC. He has an older brother named Eamon Jr. and two sisters named Claudine and Catherine.

Farrell was educated at St. Brigid’s National School, followed by the exclusive all-boys private school Castleknock College. He attended the Gaiety School of Acting but dropped out when he was cast in the BBC drama ‘Ballykissangel.

After his success in ‘Abblykissangel,’ he had his movie debut in ‘The War Zone. After that, he acted in a movie called ‘Ordinary Decent Criminal.’ In 2000, he starred in the movie ‘Tigerland,’ after which his career graph spiraled northwards.

His next venture was ‘American Outlaws’ in 2001, in which he played the role of an outlaw by the name Jesse James. In 2002, his big breakthrough came when he got an opportunity to act in Steven Spielberg’s film ‘Minority Report.’ His film ‘Phone Booth’ was also a hit at the box office.

The next two years, he had important roles opposite actors such as Keira Knightley in ‘London Boulevard,’ and Jennifer Aniston in the comedy film ‘Horrible Bosses.’

In 2012, he starred in the remake of ‘Total Recall.’ His acting was compared with that of Arnold Schwarzenegger, who had played the lead in the original.

How Does Colin Farrell Spend His Money?

Colin Farrell spends his money on cars and charity work.

Farrell has some of the most expensive cars in the game. Some of his most notable car purchases include a Ford Bronco and Cadillac Escalade Hybrid.

Farrell likes to give back to the community by supporting different charities such as Belong To, Children’s Hospital Los Angeles
Elizabeth Taylor AIDS Foundation, Foundation for Angelman Syndrome Therapeutics, GLSEN, It Gets Better Project, ONE Campaign, Special Olympics, and The Trevor Project.

Here are some of the best highlights of Colin Farrell’s career:

“Vampires have always held a very seductive kind of lore and have always been some variety of attractive, whether it’s an attractiveness that’s born of just the physical attributes that they have – this kind of ethereal beauty or translucent pallor – or whether it is more to do with the way they carry themselves.” – Colin Farrell

“Most of the actor’s work is done at home, in your hotel room, in the wee hours of the morning thinking and reading and feeling, walking around and listening to music. It really just because an internal exercise, whatever skills. It’s great if you have to learn something new for a gig and designing a character physically is always fun but it does become an internal exercise in separating the wheat from the chaff.” – Colin Farrell

“I will say that as I get older and calmer and quieter in my own self, the one quality in a woman that I find more and more attractive is kindness. A sense of adventure and humor is important too, but I truly find kindness and consideration for others to be the most attractive thing in anyone.” – Colin Farrell

Now that you know all about Colin Farrell’s net worth and how he achieved success; let’s take a look at some of the lessons we can learn from him:

1. What Life Is About

Life is apogee, apex, decline; life is death – and everything else is open to discussion.

You spend so much time in your head in life. And what yoga does is it asks you to allow your head to be quiet, to allow it to be still, just for an hour and a half. Just deal with your body and your breath.

How much is Colin Farrell worth?

Colin Farrell’s net worth is estimated to be $80 Million.

How old is Colin Farrell?

How tall is Colin Farrell?

Colin Farrell is an Irish actor who was born in Dublin, Ireland. He has starred in numerous big-screen movies and series such as ‘American Outlaws’, ‘Phone Booth’, ‘Hart’s War’ and ‘The Recruit’.

What do you think about Colin Farrell’s net worth? Leave a comment below.