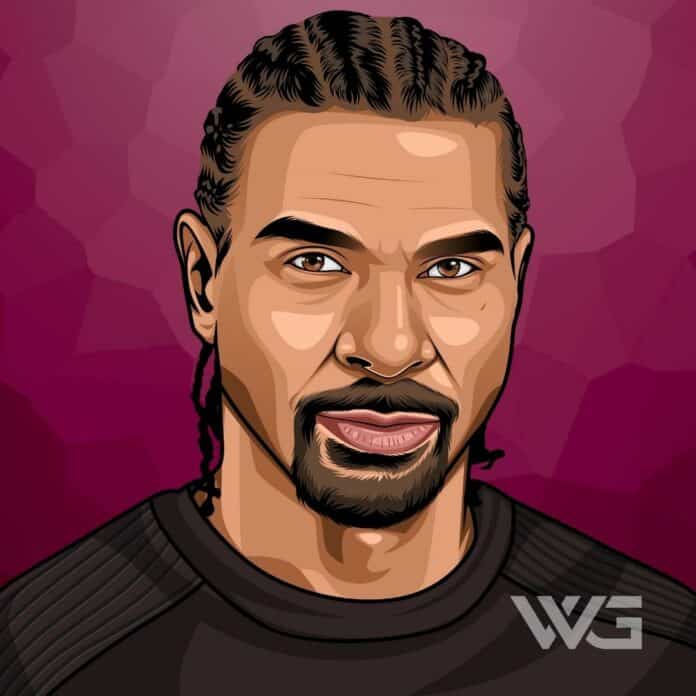 What is David Haye’s net worth?

David Haye is regarded as one of the best British fighters of all time, and he certainly lived up to the hype during his time in the ring.

While he has since retired, he has launched his own promotional firm and a range of vegan protein powders to ensure his net worth continues increasing.

David Deron Haye was born October 13, 1980, in the Bermondsey district of London, to an English mother and a Jamaican father.

Growing up, David attended Bacon’s College in Rotherhithe, having spent most of his childhood in Bermondsey.

At 18, Haye competed in the light-heavyweight division at the World Amateur Championship in Houston, Texas, in 1999.

He narrowly qualified for the 2000 Sydney Olympics but was defeated by Michael Simms early in the competition.

In 2001, at the World Championships in Belfast, Haye competed in the heavyweight division, making it to the finals to win a silver medal.

David Haye started his career as a cruiserweight in 2002, defeating Tony Booth in a match at York Hall in London.

Haye went on to win the English cruiserweight title in 2003 and was undefeated until 2004, when he lost for the first time to Carl Thompson.

Haye had remained undefeated from 2004 to 2011 when he faced his second loss to Wladimir Klitschko, who took his WBA heavyweight title.

Haye announced his retirement on social media, citing all the injuries he suffered during his time in the ring, and revealing that he had undergone spinal surgery in 2015.

David Haye might not have earned enough to match the richest boxers in the world, but he’s come very close!

Although we don’t know how much he has earned from every fight, we do have information about some of his biggest winnings.

While he may not have earned as much as Floyd Mayweather, David Haye has netted himself a small fortune and today is even more wealthy than Mike Tyson, who lost the majority of his wealth.

David Haye married his wife Natasha in 2008, and together they have a son, Cassius, named after boxer Cassius Clay, and a daughter, Sienna.

Haye and his wife divorced in 2016, after eight years of marriage, and in 2021 he was reportedly dating model Sian Osborne.

In 2014, David made the decision to become a vegan after watching a documentary on how animals are mistreated in the meat industry.

Later the same year, he released his own line of vegan protein powder, and in 2016 he appeared in a promo video for PETA.

David Haye has received many titles during his time in the ring, which has helped make him a force to be reckoned with.

While all of his title victories have been important, some stand out more than others for their prominence.

Here are some of David Haye’s greatest title victories:

David Haye has earned himself many titles during his professional boxing career, but these are the ones that made him stand out the most.

How Does David Haye Spend His Money?

David Haye likes living large, and while he tends to keep his spending on the down-low, we do know he put his $2 million home up for sale in 2008.

Haye has also been seen driving a convertible Rolls Royce and has admitted to spending $160k on a limited-edition Mercedes SL.

We also know he owns a Rolls Royce Wraith, and it’s likely Haye has many more expensive cars, given his proclivity for the most popular luxury car brands, though we can only speculate.

David Haye has enjoyed remarkable moments throughout his career that have distinguished him from his opponents.

However, some of his biggest milestones are the ones that impacted his success the most.

Here are some of the best highlights of David Haye’s career:

Haye has accomplished a lot during his 16-year boxing career, but these highlights have been his most remarkable achievements.

David Haye knows a thing or two about success and doesn’t hesitate to talk about how he has succeeded in the ring.

Throughout numerous interviews, Haye has given fans a bit of insight into his life and how he approaches boxing.

Here are our favorite quotes from David Haye:

There is a lot we can learn from David Haye and his incredible boxing career.

Now that you know all about David Haye’s net worth, we can take a closer look at what he can teach us about finding success for ourselves.

Here are some of the best success lessons to learn from David Haye:

If you find yourself becoming a one-trick pony, it’s time to diversify your skills to help you stand out.

While it’s great to excel in a particular area, broadening your horizons is essential if you want lasting success.

2. Learn To Be Comfortable Under Pressure

Being able to stay cool under pressure is something every successful person needs to be able to do.

Train yourself to be comfortable with deadlines and take steps to mitigate anxiety if you feel like the stress is too much.

However, don’t forget to balance this with adequate rest and relaxation!

When you achieve a goal, no matter how big or small, treat yourself to something for a job well done!

This is a great way to stay motivated, and it can give you the extra push you need to keep pushing yourself.

David Haye has made a name for himself in the ring as one of the best boxers in the world and earned a hearty net worthwhile doing it.

Despite being retired, Haye continues to bring in money through his promotion company and his line of vegan protein powders.

Make sure to check back for updates often so that you don’t miss any changes to David Haye’s net worth!

What do you think about David Haye’s net worth? Leave a comment below.