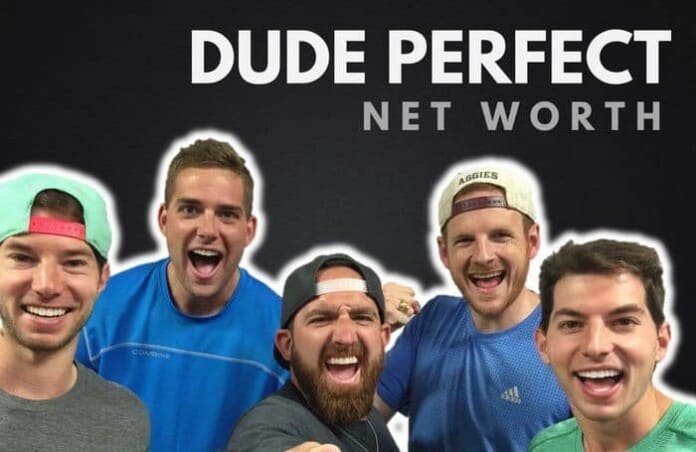 What is Dude Perfect’s net worth?

As of February 2023, Dude Perfect’s net worth is estimated to be roughly $50 Million, and currently, they have over 5 billion viewers.

Dude Perfect is an American sports entertainment group that is known for its popular channel on YouTube. The group consists of twins Cory and Coby Cotton, Cody Jones, and Garrett Hilbert.

They initially gained recognition when they started to upload sports videos on YouTube and received more than 200,000 views in one week.

Everything began when the group started to bet sandwiches via basketball shots in their backyard which they recorded with a camera. They called their debut video “Backyard Edition” and eventually the video was released on YouTube.

In one week the video received over 200,000 views. After the debut video, they uploaded another video that was of a trick shot from the Christian summer camp Sky Ranch, which now has over 18 million views.

Their debut video “Backyard Edition” was a big success for the group. Their second video “Sky Ranch” has today over 18 million views. Afterward, ESPN contacted the group for a segment.

The group started to receive professional requests and endorsements. Dude Perfect has worked with all kinds of sports athletes, and in 2011 the group launched a mobile game for Android and iOS.

In 2015, The Harlem Globetrotters selected Dude Perfect for their annual player draft, and later on, they approved a television series titled “The Dude Perfect Show”.

They set the record for the longest basketball shot in 2009 when one of the cast was shooting from the third deck of Kyle Field.

They extended their record with a cross tower shot which was 216 feet (66m) high, and the basket was 150ft (46m). Their video Ping Pong Trick Shots 3 was named number three on YouTube’s list of the Top Viral.

Dude Perfect has collaborated with some of the best athletes all over the world, including the likes of Serena Williams, Aaron Rodgers, Chris Paul, Morgan Beck, Luke Bryan, and Ricky Stenhouse Jr.

Here are some of the best highlights of Dude Perfect’s career:

“As juniors at Texas A&M, we posted our first video in 2009. For some reason I still don’t fully understand, it caught the attention of Good Morning America and they called wanting to air it the following morning! I remember feeling both a genuine excitement and a sense of gratitude that God would allow what we created to be highlighted that way.” -Dude Perfect

“Dude Perfect has afforded us some incredible opportunities that, earlier in my life, I could have only dreamt of. I never want to downplay the exciting pieces of this journey, but at the same time, each of these experiences come and go and their luster fades. It’s easy for me (and I think for all of us) to live for the next thing: the next tv show, the next concert, the next weekend, the next promotion, the next vacation.” Dude Perfect

“Over the past year, God has been using a specific verse in my life to bring my focus to Him. Psalm 86:11 says, “Teach me Your way Lord, that I may rely on Your faithfulness; give me an undivided heart, that I may fear Your name.” -Dude Perfect

“No. I don’t want to burst anyone’s bubble or demotivate someone from seeking that next milestone, but just know that it won’t satisfy you the way you think it will. Think about it. Do you know anyone “at the top” who’s really satisfied with where they’re at in life? The richest and most famous people on the planet are some of the most unsatisfied people on earth.” – Dude Perfect

Dude Perfect is one of the most popular and viral channels on YouTube. Their video Ping Pong Trick Shot 3 put them third place in Top Viral on YouTube.

They have been working with famous athletes all over the world. They have over 30 million subscribers.

As of February 2023, Dude Perfect’s net worth is estimated to be roughly $50 Million.

What do you think about Dude Perfect’s Net Worth? Leave a comment below.