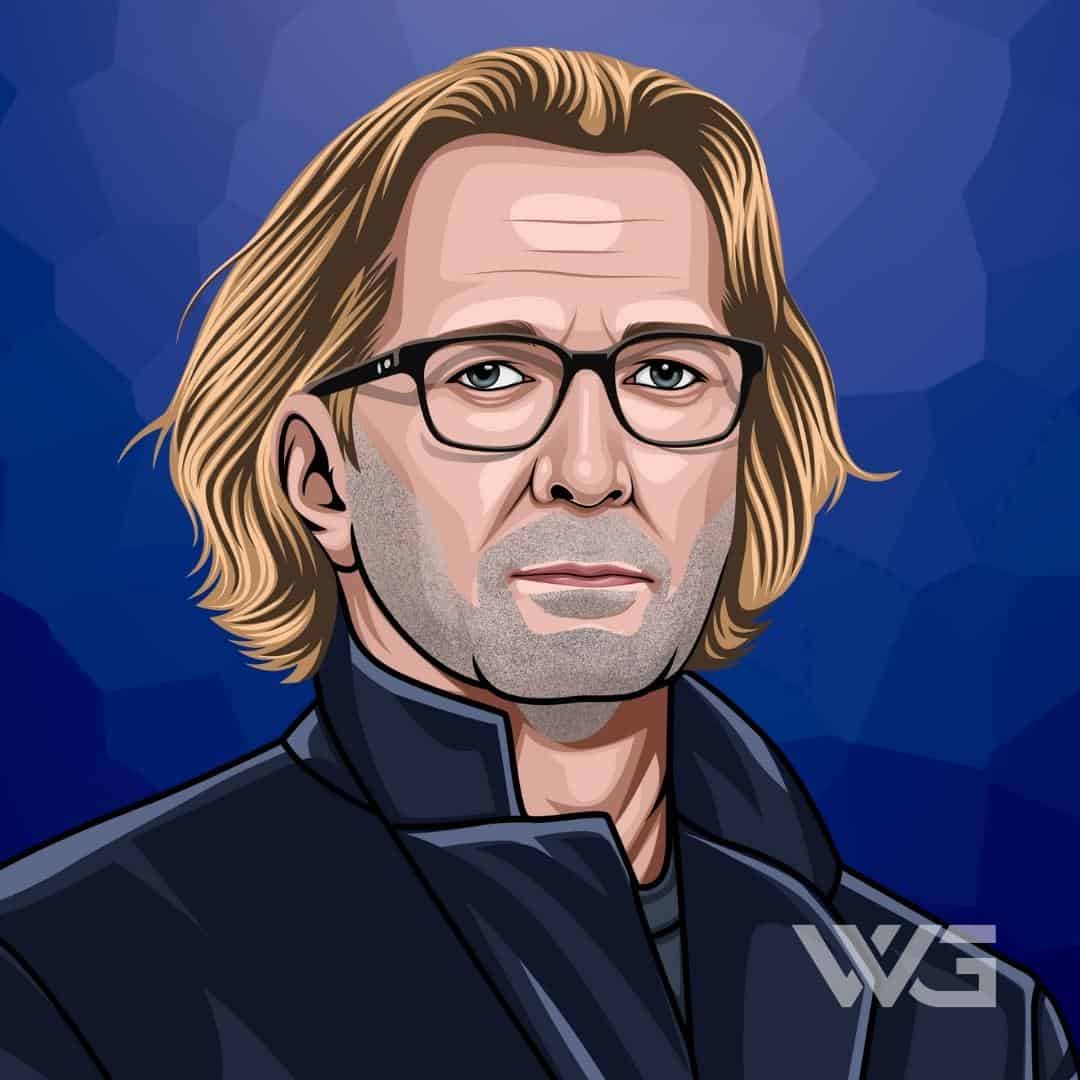 What is Eric Clapton’s net worth?

Eric Clapton is one of the biggest names in the music industry and a true Rock and Roll legend. Through his solo works and band collaborations, Eric has earned himself the name of one of the all-time greatest virtuosos.

Bands that have benefited from his incredible skills are The Yardbirds, Cream, Blind Faith, and Derek and the Dominos.

Eric is a self-made artist whose arrangements and performances have mesmerized audiences around the world.

His childhood was a bit unusual, to say the least. His mother, Patricia, gave birth to Eric at 16, but because of her age, her parents took over his care. Eric believed that his grandparents were his parents from a young age and that his mother was his sister.

His father, Edward Walter, was a soldier from Quebec and was drafted to go to war shortly after Eric’s birth. After the war, his father returned to Canada but was absent during Eric’s childhood.

While Eric was still young, his mother married another soldier and moved to Germany, leaving her son with her parents.

When Eric turned 13, he was given his first guitar but found it difficult to learn, so he gave up a few months later. Around the age of 15, he decided to pick up the instrument again and this became an escape for him.

He attended Hollyfield School and graduated in 1961. After high school, he started to study at Kingston College of Art but, due to his complete focus on music, he was expelled. This was no problem for Eric, as his guitar talents had already started catching people’s attention.

He started busking from time to time after leaving college and his first performance in front of people was alongside Dave Brock.

The two would perform in various pubs around Surrey in 1962 and, at the age of 17, Eric joined his first band, The Roosters.

The band did a seven-gig stint in 1963 with Casey Jones and the Engineers before Eric moved on.

In October 1963, Eric joined a band called the Yardbirds. He played with them for two years until the release of their first big hit, “For Your Love”.

Eric left the band due to not getting along with the bassist and decided to pursue other opportunities.

He joined John Mayall and the Bluesbreakers in April of 1965 but quit the band after a year of playing with them. He then joined Cream, a small band that released six albums before they split up in 1968.

The next year, Eric decided to form his own band and teamed up with Ginger Baker, Rick Grech, and Steve Winwood. His new band, Blind Faith, unfortunately only played for seven months before deciding to call it quits.

Three years later, Eric threw together a touring band and recorded his first #1 hit, which was a cover of “I Shot the Sheriff” by Bob Marley. After making his first solo hit, he decided to take a break from music and attended rehab because of his alcohol problem.

After he was released from rehab, Eric released film scores he’d composed and, after winning multiple awards during this time, he released the “Unplugged” album to wide acclaim.

He has performed or collaborated with many stars, including Jimmy Page, Phil Collins, Sting, and many others.

Eric has performed over 3,000 concerts during his career and retired from worldwide touring in 2015. You can check out his official website to see what he’s up to now.

Eric has never been into music for the money, but rather for the pure magic of performing with a guitar.

Now that he is no longer touring, we are only able to hear his new songs performed by other artists.

There’s little doubt that Eric Clapton will continue to accrue huge royalties on his awaard winning songs and compositions fro many years to come.

Despite his disdain for money in favor of music, Eric has done extremely well for himself. His record-breaking songs and sold-out performances increased his wealth considerably.

Here’s a breakdown of Eric Clapton’s annual net worth:

Eric had never let an opportunity pass him by, and if he thought that he could do better elsewhere, he moved on.

Eric met Pattie Boyd, the wife of legendary guitar player George Harrison from the Beatles and the father of Dhani Harrison. He immediately fell in love and started writing love letters to Pattie. Pattie decided to divorce George in 1977 and started a relationship with Eric.

Two years later, Eric married Pattie Boyd. Eric and Pattie had difficulties having children and tried different types of fertility procedures, but nothing seemed to work. After multiple miscarriages, Eric started having affairs.

He had an affair with Yvonne Kelly, manager of AIR Studios Montserrat, and had a daughter, Ruth Kelly Clapton, in 1985.

Another affair with an Italian model, Lory Del Santo, produced son, Conor, in 1986. Eric and Pattie decided to get a divorce in 1989 due to his infidelity and his abusive behavior brought on by his alcoholism.

In 1998, tragedy struck when Eric’s son, Conor, fell from a window in New York and died.

Eric met a young administrative assistant, Melia McEnery, who was 22-year-old, and the two got married in 1999. They had three daughters; Sophie Belle, Julie Rose, and Ella May.

With Eric’s prodigious talent, it didn’t take long for him to start getting attention. He managed to win 17 Grammys and has been recognized as one of the all-time greats of music.

Eric has given his life to making music and his efforts have been acknowledged and rewarded across the globe.

Here are some more memorable moments from Eric Clapton’s career:

Even though Eric is no longer touring or playing live gigs, he is still creating music.

How Does Eric Clapton Spend His Money?

Eric has a car collection that features some of the most expensive cars in the world as well as some extremely rare examples.

It is difficult to put an actual value on the collection, as the value could be anywhere from $50 million to $100 million or possibly even more. What we do know is that he has many rare Ferraris, such as a 1964 Ferrari 250 GT Lusso and a Ferrari 612 Scaglietti.

The value of his art collection is unknown, but what we do know is he sold three Gerhard Richter pieces for $77.3 million.

He is also the proud owner of extremely popular pieces from the art world, such as Edgar Degas’ “Le Sommeil”, Maurice Utrillo’s “Le Bouguet” and Henri Matisse’s “Nu Debout”.

His other assets include several investments in real estate with his house, “Standfast Point” in Antigua, worth $14 million.

He also owns various other very valuable properties in England, France, and Ohio.

Eric’s talents have surpassed traditional music lovers and his work is recognized by royalty. He’s a multi-award-winning artist who has been able to transcend tragedy to produce some of his best work.

Clapton will go down in history as one of the most influential guitarists to grace the rock and roll stage.

Here are some of the best highlights of Eric Clapton’s career:

Eric’s abilities on a guitar are hard to match and he is acknowledged as the leading guitarist of his era.

However, his ability to write chart-topping songs is second to none and while he is retired, we’re sure to hear more from him in the years ahead.

Eric has always had a way with words, primarily as a songwriter, but also as a social commentator.

His lyrics show a deep insight into the prevailing zeitgeist, ensuring its relevance to his fans’ daily lives and struggles for a fulfilling life.

Here are our favorite quotes from Eric Clapton:

Eric had a difficult time growing up and one of the ways he coped was through his music.

As an adult, he used music to help with the ups and downs of a chaotic life and his fans have benefitted from the masterful performances he produced.

Now that you know all about Eric Clapton’s net worth, here are some of the best success lessons to learn from Eric Clapton:

1. There Is Always More

Eric could have stuck with one of his many bands but knew that there was more he could accomplish. So instead of waiting, he went on to find what more he could do.

2. You Can’t Control Everything

Eric always believed that risk comes from trying to control something over which you have no power. He feels that sometimes you need to just let things happen.

3. Live Every Day As If It’s Your Last

Living each moment as if it’s your last helps you appreciate and achieve more. Eric always played the guitar as if it was the last performance he would give.

Eric Clapton is such a legend he could fill any stadium in the world if he chose to.

He went through tough periods throughout his life, resulting in a lot of controversy and heartache. But nothing can take away the huge amount of talent he possesses, and the influence he’s had on the world of music.

What do you think about Eric Clapton’s net worth? Leave a comment below.