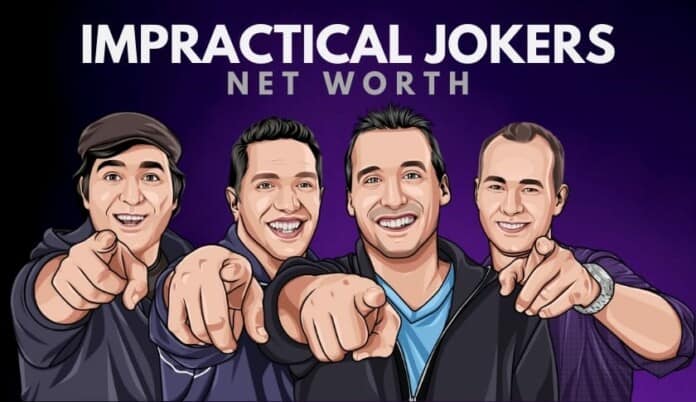 What is the Impractical Jokers’ net worth?

As of November 2022, the Impractical Jokers’ net worth is $20 Million, making them worth $5 million each.

After a long and successful history, including winning the $100,000 grand prize in NBC’s “It’s Your Show” competition, the group went into television.

In 2008, they filmed a pilot episode for a scripted sitcom for Spike TV, but the show did not go to series. TruTV announced Impractical Jokers, originally slated to be named Mission: Uncomfortable, on April 12, 2011, eight months before the show’s debut.

Since 2011, viewers of the hidden camera prank show Impractical Jokers on TruTV have delighted at the prankish antics of Joseph “Joe” Gatto, James “Murr” Murray, Brian “Q” Quinn, and Salvatore “Sal” Vulcano, sometimes known together as the comedy troupe Tenderloins.

Murray explained how the hidden camera format made sense based on the jokesters’ skills. “We needed to find the right format… thing is, we’ve been doing this for years, but when it’s on camera, the embarrassment is amplified.”

At the time that they pitched the idea to TruTV, Murray was VP of Development for NorthSouth Productions, the company that has produced the series since its inception.

Here are some of the best highlights of Impractical Jokers’ career:

“For us, I think the hard thing was finding the right format for what we do. We are organically best friends, you know. We’ve been doing this kind of ‘embarrassment’ humor all our lives and so when we created the format for the Jokers show… it just shows off our friendship in a really nice way.” – James Murray

“Yeah, I mean there’s always the chance of it. And that kind of keeps us on our toes when we are filming the regular show. If we lose then there’s a real air of tension because most of the punishments are kept a secret from each other. And that day… the day of the punishments.” – Sal Vulcano

“I have a problem with that day…. because that day we filmed two punishments back to back. We filmed me jumping out of an airplane and then went over to the cornfield to punish Sal. Two in the same day. And he goes on and on and on about how terrified he was. I fell 14,000 feet free-fall, not knowing if the parachute would open.” – James Murray

“Q had introduced that game to us. It’s just so stupid to do it but one of the most terrifying feelings is when you are about to clip it onto someone. When you get caught – when you are a middle-aged man in a supermarket and they turn and look at you with judgment in their eyes! That’s one of the worst feelings!” – Joseph Gatto

Now that you know all about Impractical Jokers’ net worth, and how they achieved success; let’s take a look at some of the lessons we can learn from them:

Justice is truth in action.

The group of guys we know and love as the Impractical Jokers were once just a regular gang of small-town pranksters from Staten Island. Today, they’re among one of the funniest groups.

As of November 2022, Impractical Jokers’ net worth is approximately $5 million each.

What do you think about Impractical Jokers’ net worth? Leave a comment below.