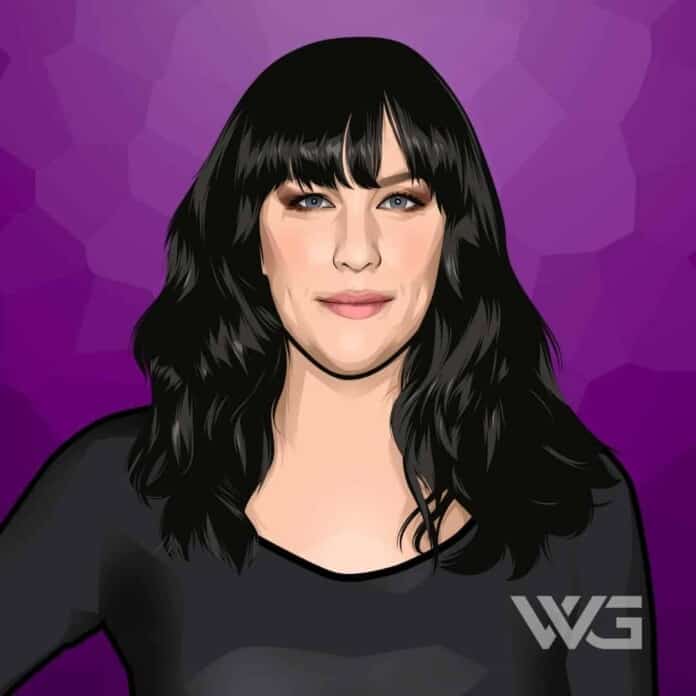 What is Liv Tyler’s net worth?

Liv Tyler is an American actress, singer, and model.

Tyler is best known for her portrayal of Arwen Undomiel in the ‘Lord of the Rings’ film trilogy. She began a career in modeling when she was 14 years old.

She later decided to focus on acting and made her film debut in ‘Silent Fall.’ She went on to achieve critical recognition with starring roles in ‘Heavy and Empire Records’.

Tyler is the only daughter of Steven Tyler and Bebe Buell. She is of Italian, English, Ukrainian, and German descent and has three half-siblings: Mia, Chelsea, and Taj.

Tyler attended the Congressional Schools of Virginia, Breakwater School, and Waynflete School in Portland, Maine. Afterward, she returned with her mother to New York City, where she went to York Preparatory for junior high and high school.

Tyler had significant roles in the films ‘Empire Records’ and ‘Heavy.’ Her breakthrough role, however, came the next year, when she played the character of Lucy Harmon in Bernardo Bertolucci’s arthouse drama ‘Stealing Beauty.’

She was in the Tom Hanks comedy ‘That Thing You Do!’. Her biggest commercial success thus far came in 1998, when she played the love interest of Ben Affleck’s character in Michael Bay‘s blockbuster science-fiction film ‘Armageddon.’ The movie, which grossed over $550 million worldwide, also featured an Oscar-nominated song by Aerosmith.

She had her most famous role in ‘The Lord of the Rings: The Fellowship of the Ring’.  She reprised the role in the film’s two sequels in 2002 and 2003. Following this success, Tyler re-teamed with her ‘Armageddon’ co-star Ben Affleck in the romantic comedy ‘Jersey Girl.”‘

On the small screen, Tyler had a main role on the HBO supernatural drama series ‘The Leftovers’,  which ran from 2014 to 2017.

How Does Liv Tyler Spend Her Money?

Liv Tyler spends some of her money on real estate.

Tyler lives in West London in a $12.45 million townhouse. In 2001, Tyler purchased an apartment on West 11th Street in Greenwich Village for around $2.5 million. Tyler also owns a home in Malibu, California.

Here are some of the best highlights of Liv Tyler’s career:

“Fathers are very, very important in building the foundations and self-esteem of children. For me, the way that I was raised, consideration, courtesy, and manners are really key, and I think the father plays a big role in setting an example to children in how to behave out in the world and how to treat people. It’s a little bit different when it comes from the dad rather than the mum somehow.” – Liv Tyler

“I’ve always enjoyed acting, but there’s a part of me that’s shied away from living a celebrity life. I don’t feel comfortable being noticed all the time. Sometimes I even fantasize about doing things other than acting. But I can remember being back on set the third day of my latest project and going, “Ahh, this is what I have to do for a living.” – Liv Tyler

“I don’t live a very posh life. No drivers are waiting or people doing everything for me. I pretty much live like a normal person… It’s not good to have a life without responsibilities, you know?” – Liv Tyler

“New York was fun as a kid. I loved to go walking. It was an adventure. I remember throwing my retainer into a garbage can one time and my mom yelling, “Get your ass over here now!” And I had to dig through the garbage and find my retainer.” – Liv Tyler

“My family dynamic is quite eccentric. I have two fathers. I think it depends on the relationship between the child and the parents, but definitely, when it comes to being a stepparent or a coparent, it’s a different relationship. There’s just as much love, but the bonds can be different.” – Liv Tyler

“After applying foundation and a little blush, dust your face with translucent powder, then mist skin with a rosewater spray and lay a Kleenex over for a second. It makes your face seem flawless in a way that looks as if you aren’t wearing any makeup.” – Liv Tyler

Now that you know all about Liv Tyler’s net worth and how she achieved success; let’s take a look at some of the lessons we can learn from her:

There is no definition of beauty, but when you can see someone’s spirit coming through, something unexplainable.

Solitude has its own extraordinary beauty to it.

Please don’t give up. You’re closer to the goal than you think.

How much is Liv Tyler worth?

Liv Tyler’s net worth is estimated to be $50 Million.

How old is Liv Tyler?

How tall is Liv Tyler?

Liv Tyler is an American actress and former child model.

Tyler is the biological daughter of Aerosmith’s lead singer Steven Tyler. She is best known for her performance in the ‘Lord of the Rings’ movie trilogy.

She also earned acclaim for her roles in such films as ‘Empire Records,’ ‘Stealing Beauty,’ ‘Cookie’s Fortune,’ and ‘Jersey Girl,’ among many others.

What do you think about Liv Tyler’s net worth? Leave a comment below.