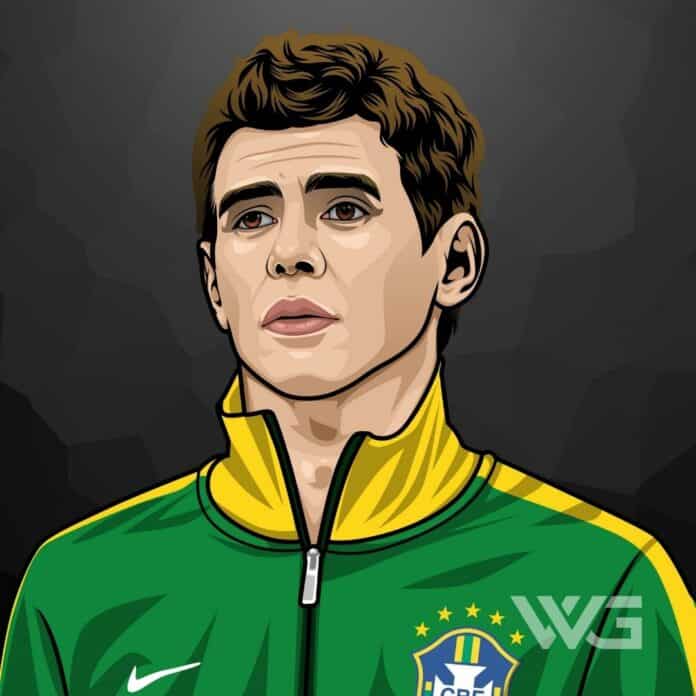 What is Oscar’s net worth?

Oscar is a Brazilian soccer player who has played for Chelsea FC and Brazil’s national team at the Olympic Games and World Cup.

Known for his agility and precise passing, he’s become one of the highest-paid players in the world thanks to his lucrative contracts with several major teams.

At 13, Oscar was picked out by talent scouts who took him to the state capital in 2004, where he joined São Paulo PC.

Oscar’s professional debut came in 2008 when he played with Sao Paulo in the second leg of the first stage of the Copa Sudamericana.

This paved the way for him to join Internacional, scoring 15 goals over a two-year period while facing issues over salary non-payment.

In 2012, Oscar signed to play for Chelsea, the team with iconic players such as Frank Lampard, John Terry, and Didier Drogba.

During his time with Chelsea, Oscar scored several crucial goals for the team, making his 200th appearance in the League Cup game against West Ham United.

In 2016, Oscar went to play for Shanghai SIPG with a reported weekly salary of $600,000, helping the team win the league for the first time.

On the international stage, Oscar played at the 2012 Olympics for Brazil, where he played alongside Neymar Jr and Alex Silva.

He also played for Brazil at the 2014 World Cup, scoring against Croatia in the final minutes of their game in São Paulo.

As one of the richest soccer players in the world, Oscar has enjoyed increasingly high salaries as his career has progressed.

His contract with Chelsea was estimated to be worth nearly $30 million, with the five-year contract with the team securing him consistent high earnings.

With Shanghai SIPG in the Chinese super league, he is estimated to earn up to $600,000 per week, equivalent to an annual salary of around $26 million.

Since his career is showing no signs of slowing down, Oscar’s career earnings can be expected to remain high for some time.

Oscar’s net worth has risen exponentially over the course of his career, with his high salary and endorsement deals likely to push it even higher.

Deals with Chelsea and Shanghai SIPG have helped to make him one of the richest athletes in the world, comparable to Luis Suarez and other Premier League players.

Future contracts will likely see this net worth rise even further, with the star player keen to move back to a major Brazilian team following his contract with Shanghai.

Oscar is married to Ludmila Emboaba, a Japanese Brazilian woman he began dating in 2009 and married in 2011.

His father was killed in a road traffic accident when Oscar was just three years old, with the player attributing his soccer success to his mother, Sueli.

Oscar maintains a strong social media presence through his official Instagram account, which has millions of followers.

Oscar’s career has seen him play soccer for teams on three continents, winning championships and tournaments along the way.

He has been celebrated for his performance on the pitch throughout his career, from his early years as an amateur up to the present day.

Here are some examples of high-profile accolades from Oscar’s career:

Since Oscar remains active on both the national and international soccer scene, it’s likely he’ll continue to pick up awards and honors in future championship tournaments.

How Does Oscar Spend His Money?

Oscar’s continually climbing net worth has allowed him to afford the many expensive luxury items typically associated with top-tier football stars.

He’s been seen with some of the most expensive cars in the world, including a luxurious top-of-the-line Aston Martin DB and a Rolls-Royce.

Along with his former teammates at Chelsea, Oscar has invested in real estate and has a property in Brazil and Shanghai.

With a string of lucrative contracts and endorsement deals, Oscar’s professional career has plenty of exciting moments to discuss.

Here are some of the best highlights of Oscar’s career:

Oscar’s career is showing no signs of slowing down any time soon, with more high points and successes on the horizon.

Oscar’s professional sporting career has seen the iconic star share his thoughts on his experiences and offer valuable insights behind the scenes.

Playing for a variety of teams over the years gives Oscar a unique perspective on the different approaches to training and the cultural impact of soccer.

Here are our favorite quotes from Oscar:

Now that you know all about Oscar’s net worth, let’s see what lessons we can learn from his achievements and how they can help us succeed in life.

Here are some of the best success lessons to learn from Oscar:

1. Don’t Let Your Past Define Your Future

Oscar was born and raised in poverty, suffering the loss of his father early and struggling to get by as a child.

He didn’t let this prevent him from achieving his ambitions and is now one of the best soccer players in the world.

2. Pay Attention To The Details

Oscar has had issues with contracts throughout his career, both when playing for São Paulo and when trying to leave Shanghai to return to Brazil.

Make sure you pay close attention to contractual obligations, so you aren’t trapped in a situation you’d prefer to avoid.

3. Money Shouldn’t Drive All Your Decisions

While Oscar’s contract with Shanghai was certainly lucrative, playing for the team isn’t as satisfactory as Oscar might have expected.

He’s expressed his desire to return to his former club Chelsea and play out his career there.

That concludes this overview of Brazilian soccer player Oscar’s life, career, and net worth.

Oscar has delivered consistently solid performances on the pitch, helping teams at the national and international levels achieve many successes.

Still in his prime, Oscar’s future success will undoubtedly increase his net worth, so check this article again for the latest information.

What do you think about Oscar’s net worth? Leave a comment below.