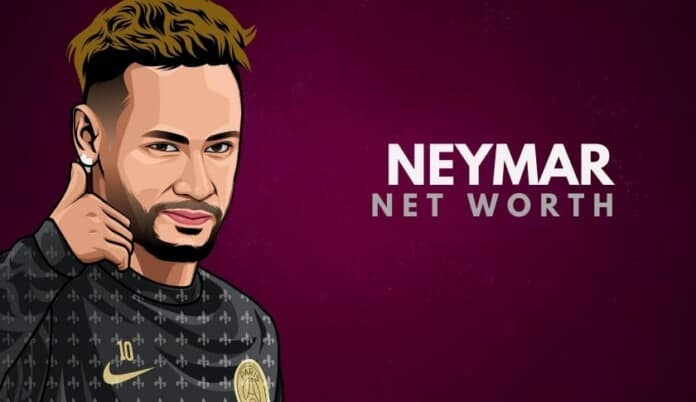 What is Neymar Jr.’s net worth?

Neymar is a Brazilian professional soccer player, and currently one of the most popular and influential soccer players in the world. The player is now representing ‘Paris Saint-Germain’, although his future with the club is uncertain.

Neymar went from playing soccer in the streets of Brazil to become one of the most sought-after soccer players in the world.

In his early childhood, he was well-known in his neighborhood for his street soccer skills, and in 2003 he played in the youth ranks of the team Portuguesa Santista. After moving to the city of Sao Vicente, he joined the club ‘Santos FC’ in 2003 at only 11 years old.

After that, he continued advancing in the team showing his strengths playing different parts. He finally earned his first senior contract with the club ‘Santos FC’ at 17.

Neymar’s senior team debut match for ‘Santos FC’ was in 2009, and he quickly became one of the team’s most valuable scorers and later helped them to win the ‘Libertadores Cup.’

During his time there he was sought after by some of the biggest clubs in Europe, but when he was offered a better salary at ‘Santos FC,’ he remained there.

Neymar was awarded the ‘World Soccer Young Player of the Year’ and the FIFA Puskas award for the best goal of the year in 2011.

He signed a contract with Barcelona in 2013 and the following season he astonished everyone as he made 39 goals throughout the season and brought many victories to his team.

Here are some of the best highlights of Neymar Jr.’s career:

“When we lose, we don’t have to change everything but correct things by working hard.” – Neymar

“The secret is to believe in your dreams; in your potential that you can be like your star, keep searching, keep believing and don’t lose faith in yourself.” – Neymar

“There is no pressure when you are making a dream come true.” – Neymar

“This moment, which we are living right now will pass too. We have to enjoy, enjoy all that we can.” – Neymar

“I was never motivated by money. I think above all else about the happiness of my family, regardless of money.” – Neymar

3 Rules for Success from Neymar Jr.

Now you know all about Neymar Jr.’s net worth, and how he was able to achieve success, let’s look at some of the success lessons we can learn from him:

1. Live in the moment

You should value and cherish every moment in your life because it is the only one you’re going to get. Don’t let life pass you by because we all have something to live for and if you don’t look up you might miss it.

2. Never lose faith in yourself.

You can’t expect others to have any faith in you if you don’t have any in yourself. You are the only person who can take action and make your dreams come true. Even at your lowest point, your faith in yourself is the most crucial thing; because nobody’s opinion of yourself matters more than your own.

Money, like all material things, can be replaced. It comes and goes and, not everyone is fortunate enough to have it all the time. Things like family, friends, and relationships that enrich your life are what matter the most and yield the most happiness.

How much is Neymar Jr. worth?

Neymar Jr.’s net worth is estimated to be $200 Million.

How old is Neymar Jr.?

How tall is Neymar Jr.?

Neymar is one of the most influential and successful soccer players of our time, and he has a net worth of approximately $200 Million. There is no doubt that his career will continue to flourish and that this number will drastically increase in the future.

What do you think about Neymar Jr.’s net worth? Leave a comment below.