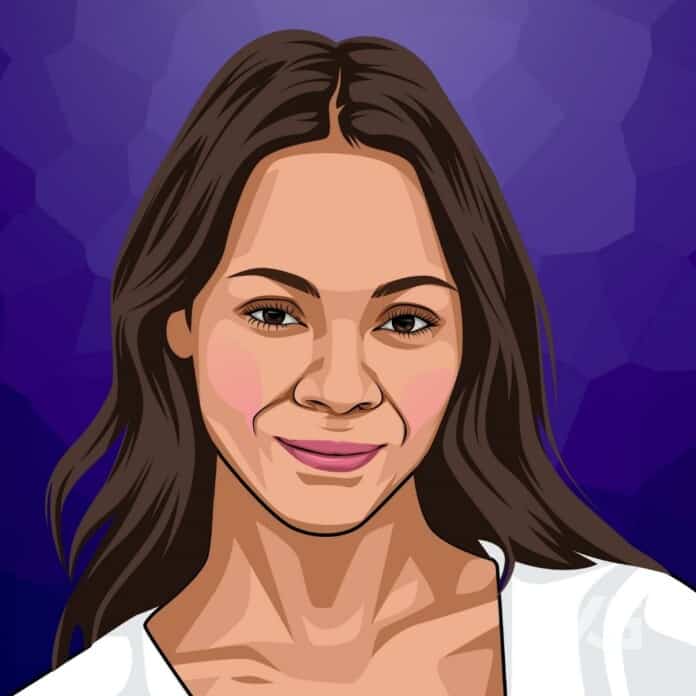 What is Zoe Saldana’s net worth?

Zoe Saldana is an American actress from New Jersey. Saldana made her screen debut in a 1999 episode of ‘Law & Order’. Today we have seen her in worldwide famous movies such as ‘Avatar’, and ‘Avengers: Endgame’.

Zoë Yadira Saldaña Nazario was born on the 19th of June, 1978, in Passaic, New Jersey. She is the daughter of Aridio Saldana and Asalia Nazario.

Saldana spent much of her childhood years in Jackson Heights, Queens, New York. As a child, she was bilingual, being proficient in both English and Spanish.

Saldana’s career began in 1999, where she made her debut on the small screen with the episode ‘Merger’ in the legal drama, ‘Law & Order’.

In 2002, she starred in the movie ‘Crossroads’ and the comedy-drama, ‘Drumline’. She followed this up with the character of Anamaria, a female pirate in the blockbuster movie, ‘Pirates of the Caribbean: The Curse of the Black Pearl,’ in 2003.

In 2010, she starred in four films: ‘The Losers’, ‘Takers’, ‘Death at a Funeral’ and ‘Burning Palms’. The same year, she made her debut in the ad world with Calvin Klein’s ‘Envy’ line. The year 2011 witnessed the release of her two films: a romantic comedy, ‘The Heart Specialist’ and crime-drama, ‘Columbiana’.

Saldana played the character of Gamora in the film, ‘Guardians of the Galaxy’ in 2014, and the sequel in 2017. She also featured in the television miniseries, ‘Rosemary’s Baby’.

Here are some of the best highlights of Zoe Saldana’s career:

“I have been in relationships where a man has disrespected me, and I don’t need to be friends with that man anymore. ‘I’m cool because I’m friends with all my exes.’ There’s a reason why you’re called an ex. I crossed you off my list. Moving on. You cross a line, you need to know that you’re going to walk this earth knowing that there’s an individual who has no respect for you.” – Zoe Saldana

“I like to be around people who are very passionate. People that won’t fight but that will be very over-protective and outspoken about their opinion, their point of view, their ideas.” – Zoe Saldana

“People think of Latina women as being fiery and fierce, which is usually true. But I think the quality that so many Latinas possess is a strength. I’m very proud to have Latin blood.” – Zoe Saldana

“I grew up loving action movies and films that were set in supernatural, unimaginable places. So I take being a woman in the film industry who is able to do action movies very seriously because I’m making the kind of movies that I wanted to watch as I was a kid and that inspired me and are the reason why I am here.” – Zoe Saldana

“As an artist, I like working with filmmakers that have the balls to kind of imagine the unimaginable. Those are kind of the radicals that I identify with.” – Zoe Saldana

Now that you know all about Zoe Saldana’s net worth, and how she achieved success; let’s take a look at some of the most badass lessons we can learn from her:

1. Found Out Who People Really Are

You take people, you put them on a journey, you give them peril, you find out who they really are.

Create a vision for the life you really want and then work relentlessly towards making it a reality.

3. You Can Always Learn Something New

No matter how much experience you have, there’s always something new you can learn and room for improvement.

How much is Zoe Saldana worth?

Zoe Saldana’s net worth is estimated to be $35 Million.

How old is Zoe Saldana?

How tall is Zoe Saldana?

Zoe Saldana is an American actress and dancer who jumped to fame with her high-profile roles in blockbuster films such as ‘Pirates of the Caribbean: The Curse of the Black Pearl’, ‘Star Trek’, ‘Star Trek Into Darkness’ and ‘Avatar’.

To date, Saldana has enjoyed great success with a line-up of worldwide highest-grossing films in her kitty.

What do you think about Zoe Saldana’s net worth? Leave a comment below.