69 of the Best Aristotle Quotes on Happiness, Education & Ethics

Aristotle was a Greek philosopher, who lived from 384 BC to 322 BC;

Aristotle’s views on physical science profoundly shaped medieval scholarship. His ethics have always been influential, and still to this day, his quotes remain true, and wise enough for everybody to take note of.

Here’s our collection of the 69 best Aristotle quotes, where he covers topics such as education, happiness and ethics:

69 of the Best Aristotle Quotes

1. “Anyone can become angry — that is easy. But to be angry with the right person, to the right degree, at the right time, for the right purpose, and in the right way — this is not easy.” – Aristotle

3. “Equality consists in the same treatment of similar persons.” – Aristotle

4. “First, have a definite, clear practical ideal; a goal, an objective. Second, have the necessary means to achieve your ends; wisdom, money, materials, and methods. Third, adjust all your means to that end.” – Aristotle

5. “Happiness depends upon ourselves.” – Aristotle

6. “I count him braver who overcomes his desires than him who conquers his enemies; for the hardest victory is over self.” – Aristotle

7. “It is easy to perform a good action, but not easy to acquire a settled habit of performing such actions.” – Aristotle

8. “It is well to be up before daybreak, for such habits contribute to health, wealth, and wisdom.” – Aristotle

9. “Man is a goal seeking animal. His life only has meaning if he is reaching out and striving for his goals.” – Aristotle

10. “My best friend is the man who in wishing me well wishes it for my sake.” – Aristotle

“No great genius has ever existed without some touch of madness.” – Aristotle

12. “One thing alone not even God can do, To make undone whatever hath been done.” – Aristotle

13. “Poetry is finer and more philosophical than history; for poetry expresses the universal, and history only the particular.” – Aristotle

14. “Probable impossibilities are to be preferred to improbable possibilities.” – Aristotle

15. “The beauty of the soul shines out when a man bears with composure one heavy mischance after another, not because he does not feel them, but because he is a man of high and heroic temper.” – Aristotle

16. “The energy of the mind is the essence of life.” – Aristotle

17. “The least initial deviation from the truth is multiplied later a thousand fold.” – Aristotle

18. “The secret to humor is surprise.” – Aristotle

19. “The worst form of inequality is to try to make unequal things equal.” – Aristotle

20. “This is the reason why mothers are more devoted to their children than fathers: it is that they suffer more in giving them birth and are more certain that they are their own.” – Aristotle

21. “To write well, express yourself like common people, but think like a wise man. Or, think as wise men do, but speak as the common people do.” – Aristotle

22. “We praise a man who feels angry on the right grounds and against the right persons and also in the right manner at the right moment and for the right length of time.” – Aristotle

23. “All human actions have one or more of these seven causes: chance, nature, compulsions, habit, reason, passion, desire.” – Aristotle

24. “At his best, man is the noblest of all animals; separated from law and justice he is the worst.” – Aristotle

25. “Dignity does not consist in possessing honors, but in deserving them.” – Aristotle

26. “Every rascal is not a thief, but every thief is a rascal.” – Aristotle

27. “Friendship is essentially a partnership.” – Aristotle

“It is the mark of an educated mind to be able to entertain a thought without accepting it.” – Aristotle

31. “It was through the feeling of wonder that men now and at first began to philosophize.” – Aristotle

33. “Nature does nothing uselessly.” – Aristotle

34. “No notice is taken of a little evil, but when it increases it strikes the eye.” – Aristotle

36. “Poverty is the parent of revolution and crime.” – Aristotle

37. “So it is naturally with the male and the female; the one is superior, the other inferior; the one governs, the other is governed; and the same rule must necessarily hold good with respect to all mankind.” – Aristotle

38. “The beginning of reform is not so much to equalize property as to train the noble sort of natures not to desire more, and to prevent the lower from getting more.” – Aristotle

39. “The ideal man bears the accidents of life with dignity and grace, making the best of circumstances.” – Aristotle

40. “The most perfect political community must be among those who are in the middle rank, and those states are best instituted wherein these are a larger and more respectable part, if possible, than both the other; or, if that cannot be, at least than either of them separate.” – Aristotle

41. “The soul never thinks without a picture. Hope is the dream of a waking man.” – Aristotle 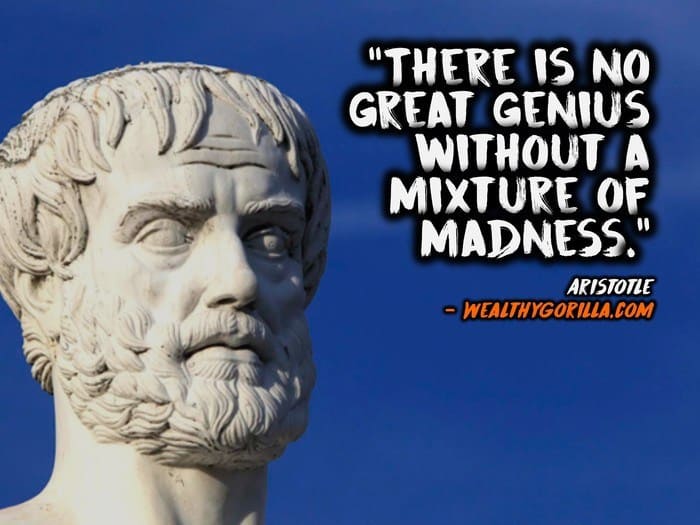 42. “There is no great genius without a mixture of madness.” – Aristotle

43. “Those who educate children well are more to be honored than they who produce them; for these only gave them life, those the art of living well.” – Aristotle

46. “All who have meditated on the art of governing mankind have been convinced that the fate of empires depends on the education of youth.” – Aristotle

47. “Character is that which reveals moral purpose, exposing the class of things a man chooses or avoids.” – Aristotle

48. “Education is the best provision for old age.” – Aristotle

49. “Excellence is an art won by training and habituation. We do not act rightly because we have virtue or excellence, but we rather have those because we have acted rightly. We are what we repeatedly do. Excellence, then, is not an act but a habit.” – Aristotle

50. “Great men are always of a nature originally melancholy.” – Aristotle

52. “In poverty and other misfortunes of life, true friends are a sure refuge. The young they keep out of mischief; to the old they are a comfort and aid in their weakness, and those in the prime of life they incite to noble deeds.” – Aristotle

53. “It is the mark of an instructed mind to rest satisfied with the degree of precision which the nature of the subject admits and not to seek exactness when only an approximation of the truth is possible.” – Aristotle

56. “No excellent soul is exempt from a mixture of madness.” – Aristotle

57. “Nor was civil society founded merely to preserve the lives of its members; but that they might live well: for otherwise a state might be composed of slaves, or the animal creation… nor is it an alliance mutually to defend each other from injuries, or for a commercial intercourse. But whosoever endeavors to establish wholesome laws in a state, attends to the virtues and vices of each individual who composes it; from whence it is evident, that the first care of him who would found a city, truly deserving that name, and not nominally so, must be to have his citizens virtuous.” – Aristotle

58. “Pleasure in the job puts perfection in the work.” – Aristotle

59. “Praise invariably implies a reference to a higher standard.” – Aristotle

60. “The aim of the wise is not to secure pleasure, but to avoid pain.” – Aristotle

61. “The educated differ from the uneducated as much as the living from the dead.” – Aristotle

63. “The roots of education are bitter, but the fruit is sweet.” – Aristotle

64. “The wise man does not expose himself needlessly to danger, since there are few things for which he cares sufficiently; but he is willing, in great crises, to give even his life — knowing that under certain conditions it is not worthwhile to live.” – Aristotle

65. “They — Young People have exalted notions, because they have not been humbled by life or learned its necessary limitations; moreover, their hopeful disposition makes them think themselves equal to great things — and that means having exalted notions. They would always rather do noble deeds than useful ones: Their lives are regulated more by moral feeling than by reasoning — all their mistakes are in the direction of doing things excessively and vehemently. They overdo everything — they love too much, hate too much, and the same with everything else.” – Aristotle

66. “To the query, What is a friend? his reply was A single soul dwelling in two bodies.” – Aristotle

69. “Wishing to be friends is quick work, but friendship is a slow-ripening fruit.” – Aristotle

Thanks for checking out this awesome collection of the best Aristotle quotes! Don’t forget to share this list on social media with anyone who might find the quotes useful.

Which are your favorite Aristotle quotes? Leave a comment below.

What is Rande Gerber's net worth? Introduction As of ,...