Jimi Hendrix was a legendary American rock guitarist and singer. He’s been regarded as one of the most influential rock stars of all time.

Although Hendrix sadly only lived until the age of 28, and his mainstream career spanned just a short 4 years, he was able to make a powerful impact on people.

Here’s our collection of the most legendary Jimi Hendrix quotes:

2. “I don’t consider myself to be the best, and I don’t like compliments… they distract me.” – Jimi Hendrix

7. “The night I was born, Lord I swear the moon turned a fire red.” – Jimi Hendrix

8. “When the power of love overcomes the love of power, the world will know peace.” – Jimi Hendrix 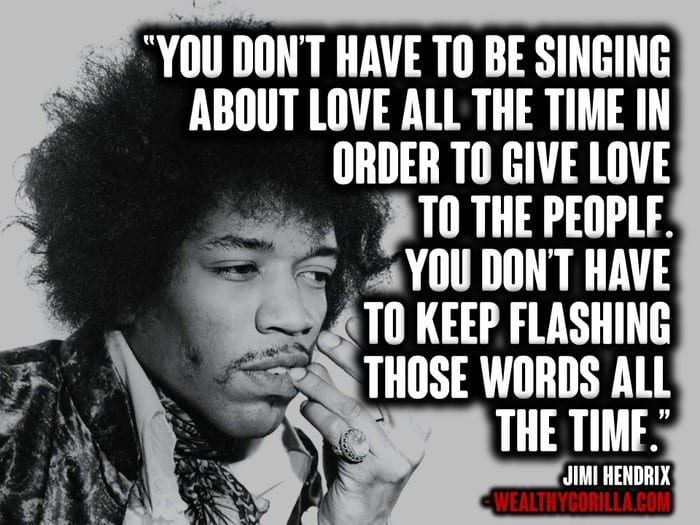 10. “All I’m writing is just what I feel, that’s all. I just keep it almost naked. And probably the words are so bland.” – Jimi Hendrix

16. “The story of life is quicker than the blink of an eye. The story of love is Hello and Goodbye.” – Jimi Hendrix

17. “When things get too heavy, just call me helium, the lightest known gas to man.” – Jimi Hendrix 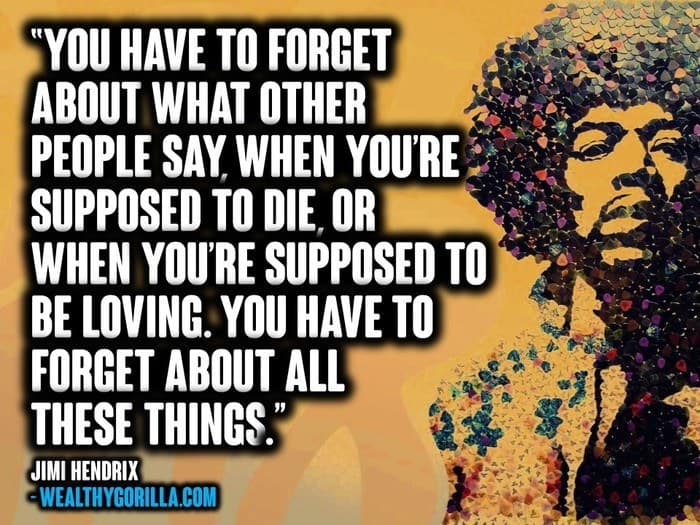 20. “I used to live in a room full of mirrors; all I could see was me. I take my spirit and I crash my mirrors, now the whole world is here for me to see.” – Jimi Hendrix

25. “Through music, you hypnotize people and when you get them at their weakest point, you can preach into their subconscious what we want to say.” – Jimi Hendrix

26. “When we go to play, you flip around and flash around and everything, and then they’re not gonna see nothin’ but what their eyes see. Forget about their ears.” – Jimi Hendrix

27. “You have to give people something to dream on.” – Jimi Hendrix

29. “I want to thank you my sweet darling for digging in the mud and picking me up.” – Jimi Hendrix

“Imagination is the key to my lyrics. The rest is painted with a little science fiction.” – Jimi Hendrix

31. “May the dreams of your past be the reality of your future.” – Jimi Hendrix

32. “Music is the most important thing. I’m thinking of my future. There has to be something new, and I want to be part of it. I want to lead an orchestra with excellent musicians. I want to play music which draws pictures of the world and its space.” – Jimi Hendrix

33. “Pretty soon I believe people will have to rely on music to get some kind of peace of mind, or satisfaction, or direction, actually. More so than politics, the big ego scene. You know it’s an art of words… Meaning nothing.” – Jimi Hendrix

34. “We want our sound to go into the soul of the audience, and see if it can awaken some little thing in their minds… ‘Cause there are so many sleeping people.” – Jimi Hendrix

35. “White collared conservatives, flashing down the street, pointing their plastic fingers at me. They’re hoping soon my kind will drop and die, but I’m gonna wave my freak flag high.” – Jimi Hendrix

36. “You have to go on and be crazy. Craziness is like heaven.” – Jimi Hendrix

38. “I will be dead in five years’ time, but while I am here, I will travel many highways and I will, of necessity, die at a time when my message of love, peace, and freedom can be shared with people all over the world.” – Jimi Hendrix

“In order to change the world, you have to get your head together first.” – Jimi Hendrix

40. “Music doesn’t lie. If there is something to be changed in this world, then it can only happen through music.” – Jimi Hendrix

41. “My goal is to be one with the music. I just dedicate my whole life to this art.” – Jimi Hendrix

42. “Sometimes you want to give up the guitar, you’ll hate the guitar. But if you stick with it, you’re gonna be rewarded.” – Jimi Hendrix

44. “Who are you to judge the life I live. I know I’m not perfect and I don’t live to be. But before you start pointing fingers make sure your hands are clean.” – Jimi Hendrix

Which are your favorite Jimi Hendrix quotes? Leave a comment below.