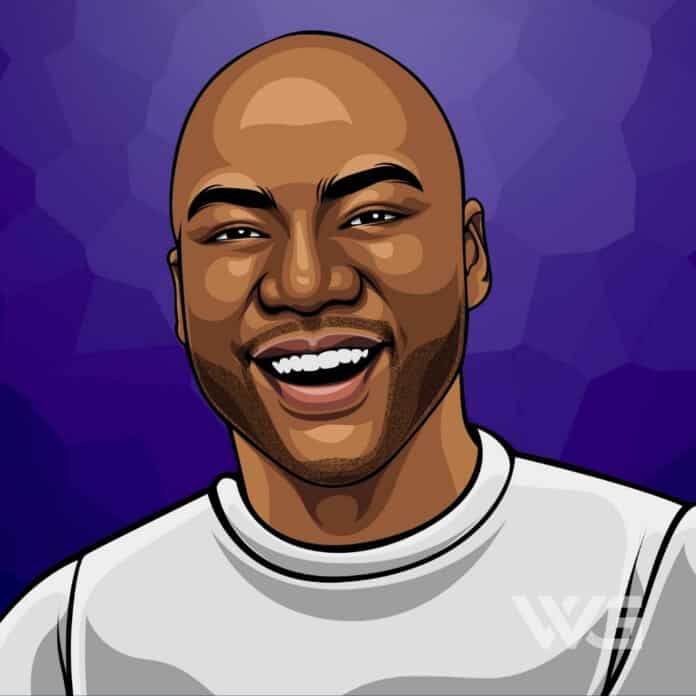 What is Charlamagne tha God’s net worth?

As of February 2023, Charlamagne tha God’s net worth is estimated to be roughly $10 Million.

He was also a VJ for The Week in Jams with DJ Envy and Sofi Green.

Lenard Larry McKelvey was born on the 29th of June, 1980 in Moncks Corner, South Carolina. As a teenager, he began selling drugs and was arrested twice for possession of marijuana and cocaine.

After witnessing a shooting from the back seat of a car, McKelvey was arrested for the third time. His father refused to pay his bail money, and McKelvey remained in jail for 41 days.

McKelvey began attending night school after he was released from the county jail. He went on to become the second mic to radio host Wendy Williams. He created a new persona based on Charlemagne.

In 2010, Charlamagne began hosting ‘The Breakfast Club’ alongside DJ Envy and Angela Yee on WWPR-FM in New York.  The following year Charlamagne served as a cast member of Guy Code, a comedy television show on MTV2 that talks about a special code of conduct just for men.

He currently stars and hosts MTV2 show Uncommon Sense with Charlamagne tha God. In 2017, his book ‘Black Privilege: Opportunity Comes to Those Who Create It’ was published. The book was ranked sixth in 2017, New York Times list of best-selling hardback non-fiction.

The same year as his first autobiography was published comedian Lil Duval joked on The Breakfast Club show about killing a sex partner if she turned out to be a transgender woman.

Charlamagne tha God, while noting that killing a trans person was a hate crime, stated that women not disclosing their trans status were “taking away a person’s power of choice” and “should go to jail or something”

Here are some of the best highlights of Charlamagne tha God’s career:

“No matter what position you’re in always hustling like an intern.” – Charlamagne tha God

“Some people are upset about progress because when progress happens, it eliminates your excuses as to why you personally aren’t progressing.” – Charlamagne tha God

“Live your truth. Honesty is always the best policy. Manners will take you where money won’t.” – Charlamagne tha God

“You have to start looking in the mirror and saying ‘this is who I am, this is what I am and this is how I’m going to be’ and start demanding more from yourself.” – Charlamagne tha God

“Always remember if you can’t be happy for someone else’s success you won’t be blessed with any of your own.” – Charlamagne tha God

“I’ve been fired 4x and it’s worth it to be myself.” – Charlamagne tha God

“Don’t beg nobody to get on the ark, just keep building and let people know the rain coming.” – Charlamagne tha God

Now that you know all about Charlamagne tha God’s net worth, and how he achieved success; let’s take a look at some of the lessons we can learn from him:

If you live to age ninety, how many days do you have left? It is a finite number, and one day you will reach that last day. Remain conscious of the value of every single day. Ask yourself every morning, “What can I do to make today count?”

2. Love is the Answer

Love is why we are here. It is the force for good in this often random, painful, and harsh world. Share it freely. Express it daily. Use it as your lodestar. What are some of your lessons learned in life over the years? How have these life lessons impacted you or the way you live?

The words you speak have power. Consider your words carefully. Use them for good rather than harm. Once they are out, you can’t take them back.

How much is Charlamagne Tha God worth?

Charlamagne Tha God’s net worth is estimated to be $10 Million.

How old is Charlamagne Tha God?

How tall is Charlamagne Tha God?

Charlamagne tha God has worked with some of the most popular celebrities and radio hosts in the industry such as Wendy Williams and Sofi Green.

As of February 2023, Charlamagne tha God’s net worth is estimated to be roughly $10 Million.

What do you think about Charlamagne tha God’s net worth? Leave a comment below.