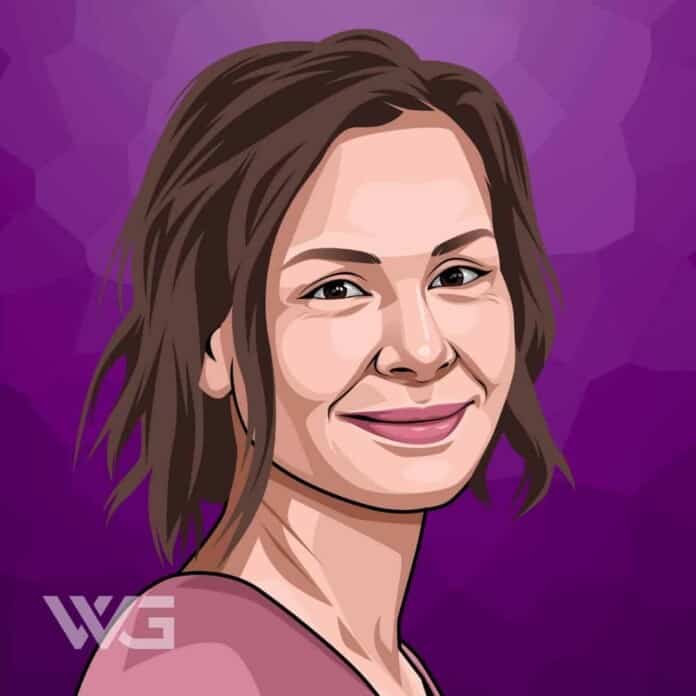 What is Embeth Davidtz’s net worth?

As of January 2023, Embeth Davidtz’s net worth is approximately $5 Million.

Embeth Davidtz is a South African-American actress from Indiana. Her screen roles include movies such as ‘Army of Darkness’, ‘Schindler’s List’, ‘Matilda’, ‘Junebug’, ‘Mansfield Park’, ‘Bicentennial Man’, and ‘Fracture’, and the television series ‘Californication’ and ‘Mad Men’.

Embeth Jean Davidtz was born on the 11th of August, 1965, in Lafayette, Indiana. Davidtz is the daughter of Jean and John Davidtz. Embeth Davidtz and her family moved to South Africa when she was nine years old.

In 1983, she graduated from ‘The Glen High School’ and then attended ‘Rhodes University’ in Grahamstown. She became part of a South African theatre organization called ‘Cape Performing Arts Board’ in Cape Town.

Davidtz’s performance in ‘Army of Darkness’ earned her the ‘Fangoria Chainsaw Award’ for ‘Best Supporting Actress’ in 1992. In the same year, she was also seen in a couple of TV films, namely ‘Till Death Us Do Part’ and ‘Deadly Matrimony.’

In 1996, she played Miss Honey in the Danny DeVito-directed film ‘Matilda.’ The following year, she played Adriana in a television movie titled ‘The Garden of Redemption.’

She was also cast to play Rebecca Pryce in the American period drama television series ‘Mad Men in 2009.’ She played the role from 2009 to 2012, appearing in eight episodes. In 2012, she played Mary Parker in the Marc Webb-directed superhero film ‘The Amazing Spider-Man.’

Davidtz has also appeared in many documentary films, such as ‘The Making of Army of Darkness,’ ‘Bridget Jones’s Diary: Behind the Scenes – Resolutions of a Tragic Spinster,’ ‘Miracle Rising: South Africa,’ ‘Nelson Mandela Redrawn,’ ‘Afternoon Tea, a Matilda Reunion,’ and ‘Schindler’s List: 25 Years Later.’

Here are some of the best highlights of Embeth Davidtz’s career:

“What’s right for most people in most situations isn’t right for everyone in every situation. Real morality lies in following one’s own heart.” – Embeth Davidtz

“The smartest people I know have that extra edge. The risk is always there that you’ll look terribly undignified and slobbering, and inside I cringe about that, but I should be more aggressive.” – Embeth Davidtz

“I was amazed at the rosy glow that can be around one when you’re in a film that’s done well.” – Embeth Davidtz

“I don’t mean to sound grandiose, but there’s something universal that you tap into with films like Feast of July and Schindler’s List. You know they aren’t make-believe. They illustrate something about life. This is my major concern whenever I select a film.” – Embeth Davidtz

Now that you know all about Embeth Davidtz net worth, and how she achieved success; let’s take a look at some of the lessons we can learn from her:

Love is a friendship that has caught fire. It’s quiet understanding, mutual confidence, sharing and forgiving. It is loyalty through good and bad times. It settles for less than perfection and makes allowances for human weaknesses.

Absence is to love as wind is to fire; It extinguishes the small and enkindles the great.

We all grow up with the weight of history on us. Our ancestors dwell in the attics of our brains as they do in the spiraling chains of knowledge hidden in every cell of our bodies.

How much is Embeth Davidtz worth?

Embeth Davidtz’s net worth is estimated to be $5 Million.

How old is Embeth Davidtz?

How tall is Embeth Davidtz?

Embeth Davidtz is an American actress, best known for portraying Miss Honey in the 1996 fantasy comedy film ‘Matilda.’ She is also famous for playing a double role in the 1999 science fiction film ‘Bicentennial Man.’

What do you think about Embeth Davidtz’s net worth? Leave a comment below.

Exploring the career highlights and multi-platinum-selling records that helped Bjorn Ulvaeus earn his enormous net worth.

Small forward Cam Reddish started his NBA career in 2019 and has since earned millions with his skills on the court.