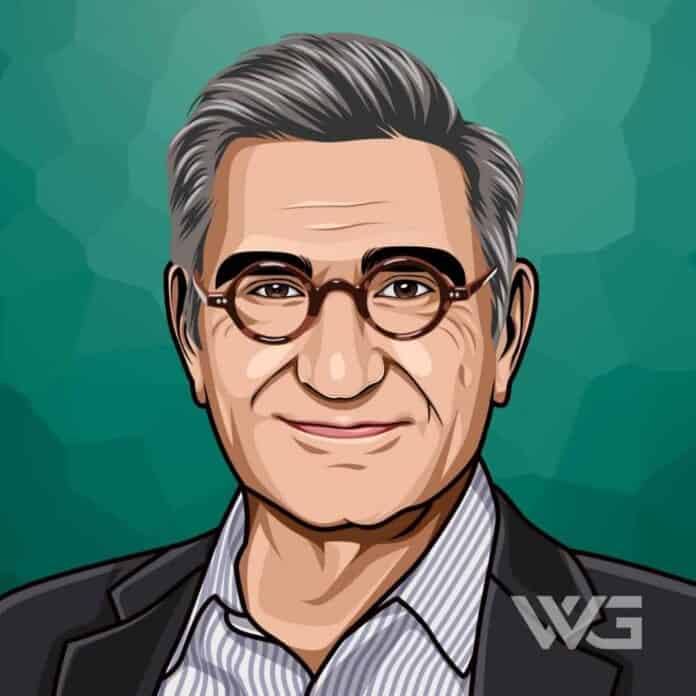 What is Eugene Levy’s net worth?

Eugene Levy is a Canadian actor, comedian, producer, director, and writer from Ontario.

He is the only actor to have appeared in all eight of the American Pie films, in his role as Noah Levenstein. He often plays flustered and unconventional figures.

His mother was a homemaker and his father was a foreman at an automobile plant.

He went to Westdale Secondary School and attended McMaster University.He was vice-president of the McMaster Film Board, a student film group, where he met moviemaker, Ivan Reitman.

Eugene Levy had been a big part of the sketch comedy series ‘Second City Television’ (commonly known as ‘SCTV’) from 1976–84, playing some of the most iconic supporting characters in the show. He portrayed a news anchor named ‘Earl Camembert’ for the ‘SCTV News’ which became one of his most popular characters.

In the 1970s and 1980s, Levy appeared in a series of popular films and television shows, including ‘Deadly Companion’, ‘Splash’, ‘Stay Tuned’, and ‘Armed and Dangerous’.

In 1996, he appeared in the American ‘mockumentary’ comedy film ‘Waiting for Guffman’ as ‘Dr. Allan Pearl’.

He also wrote the script for the film. After a series of small roles in the films like ‘Richie Rich’s Christmas Wish’, ‘The Secret Life of Girls’, and ‘Dogmatic’, Levy was signed for a role in the American teen sex movie ‘American Pie’.

Levy performed brilliantly in ‘American Pie’ and his “cool dad” image won the hearts of the audience members. He went on to reprise the role in all the seven sequels of the original film between 1999 and 2009 and was one of the significant reasons for the success of the entire series.

Levy worked again with his long-term friend Steve Martin in the 2003 American comedy film ‘Bringing Down the House’ as ‘Howie Rottman’.

Here are some of the best highlights of Eugene Levy’s career:

“I’m not in a situation where you get a thousand scripts. You want to make a living, you want to put your kids through school. I’d rather do three bad films that pay well than do one good film every three years that doesn’t pay well. … To me, if you can get a steady check in this business, you’re doing okay.” – Eugene Levy

“I love comedy. Playing the underdog, and getting laughs is my form of entertainment. I could think of nothing different that I would want to be doing at this time in my life.” – Eugene Levy

“I can’t do comedy that is cutting and vicious. If I knew I’d said something that was going to make someone feel bad, well, that supersedes everything.” – Eugene Levy

“But I’ve never really done anything that implies any kind of danger. I wouldn’t skydive, I wouldn’t deep-sea dive, I wouldn’t parachute. I think you’re really just rolling the dice. Who packed your chute the night before?” – Eugene Levy

Now that you know all about Eugene Levy’s net worth, and how he achieved success; let’s take a look at some of the strongest lessons we can learn from him:

You need to get comfortable with this simple idea: The only thing constant is change. Instead of fearing it, embrace it.

2. Clean Along The Way

Along the way, your home would start to smell, fill with fruit flies, and generally make it less enjoyable to live in. So don’t procrastinate. Clean along the way.

3. Silence Can Be Beautiful

You don’t always have to fill up the silence with words. Sometimes there is beauty in being silent.

How much is Eugene Levy worth?

Eugene Levy’s net worth is estimated to be $30 Million.

How old is Eugene Levy?

How tall is Eugene Levy?

The multi-faceted personality is popularly known for playing the ‘super-cool dad’ ‘Noah Levenstein’ in all the eight parts of the American adult comedy film series ‘American Pie’.

He established himself as one of the most popular comedians in the Hollywood film industry with his performances in films like ‘Bringing Down the House’, ‘Cheaper By the Dozen 2’, ‘Father of the Bride Part II’, and the ‘American Pie’ series.

As of February 2023, Eugene Levy’s net worth is estimated to be roughly $30 Million.

What do you think about Eugene Levy’s net worth? Leave a comment below.