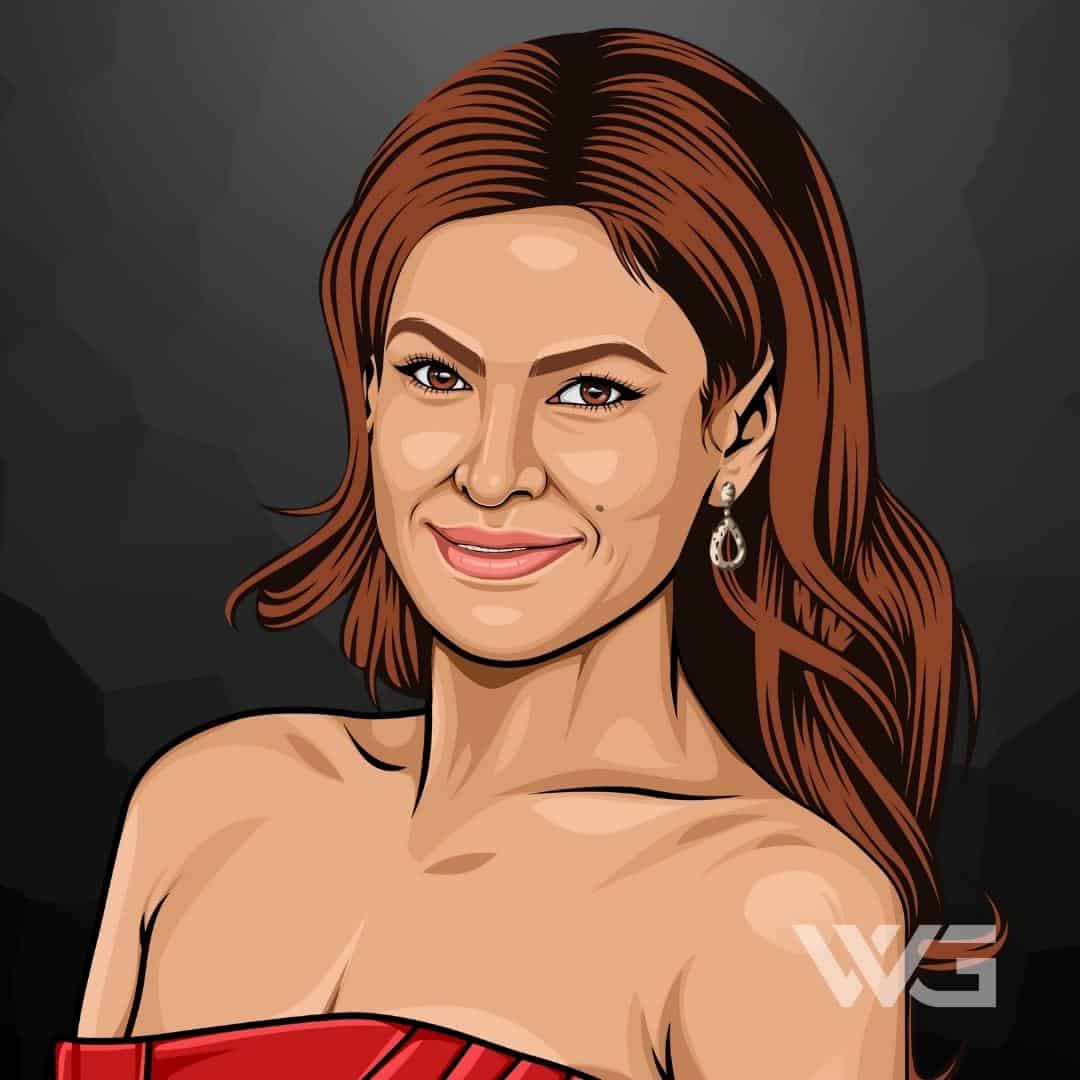 What is Eva Mendes’ net worth?

Eva Mendes is a popular actress, model, and fashion designer who is married to the Hollywood heartthrob, Ryan Gosling.

Her best-known roles were in the films, Children of the Corn V: Fields of Terror, Hitch, and 2 Fast 2 Furious.

The 2000s marked the beginning of this former B-movie star’s rise to the big leagues of acting. She hasn’t appeared in a movie since 2014 and Eva has no plans to return to acting anytime soon.

She has three siblings; Janet Mendes, Carlo Mendez, and Juan Carlos Mendez Jr., and was brought up by her mother after her parents divorced.

Eva attended Hoover High School and, after graduation in 1992, attended university until a talent agent spotted her.

Deciding to leave her studies, she appeared in small commercials and music videos while training with a professional instructor, Ivana Chubbuck.

Eva’s career started in the 1990s when she starred in a variety of B-grade films. Her career took off in the early 2000s when she secured roles in A-grade films like “Training Day”.

After that, she received more lucrative offers and found herself co-starring in movies like “2 Fast 2 Furious”, “All About the Benjamin’s”, “We Own the Night”, and many more. She worked alongside Jason Statham, Lucas Black, Dwayne Johnson, and Vin Diesel on some epic movies.

The romance/comedy movie, “Hitch” was the first movie where a minority actor was part of a mainstream romance at that time.

When working with renowned actor Will Smith, it was obvious that the two worked incredibly well together. USA Today described the film as her best screen role to date.

The movie “Ghost Rider” was released in 2007 and received a lot of attention from critics and fans. The film reached the top of the North American box office and was successful worldwide.

One of her biggest commercial successes was her role in “The Women”, despite the criticism it received from some quarters.

Subsequent to Mendes featuring in the documentary, “Half the Sky: Turning Oppression into Opportunity for Women Worldwide”, she appeared in Lost River, a film directed by Ryan Gosling.

She then took a break from acting and started a new career in fashion design. Producing a line of bed linens and dinnerware as well as her own fashion line, Eva by Eva Mendes. She also launched the CIRCA Beauty makeup brand in 2015.

Eva has done extremely well financially right from the beginning, as she’s played to her strengths and capitalized on her good looks and acting talent.

While Eva has indicated that she has no plans on returning to the big screen, there are one or two roles that she might be interested in.

As one of the world’s most beautiful women and has earned a fortune from both modeling and her acting career, Eva has an impressive net worth.

Here’s a breakdown of Eva Mendes’ annual net worth:

Eva and Ryan Gosling are one of the richest couples in Hollywood, with Eva’s wealth sure to increase over the coming years.

Mendes was in a relationship with the filmmaker, George Augusto, for eight years before meeting Ryan Gosling in 2002.

Eva and Ryan have two daughters and she has put her acting career on hold to be with her children.

She married Ryan in 2016 and the two have attempted to keep their family out of the media to protect their children. However, you can follow Eva on her official Instagram account for a glimpse into her glamorous lifestyle.

Eva has had a relatively short professional film career and has therefore not achieved quite the number of awards that one might expect.

With her acting put on hold, it will be some time before we see her winning any more accolades.

Here are some of the more memorable moments from Eva Mendes’ career:

For an actress to win awards so quickly after starting out, she would likely have been a major talent if she’d continued acting.

We can only hope that she will come out of retirement to grace the big screen with her talent in the not-too-distant future.

How Does Eva Mendes Spend Her Money?

Eva is conservative in her investments and believes in putting her money into real estate projects.

She and Ryan sold her three-bedroom home for $1.27 million and have had their eye on an Italian Revival estate called the Villa Delle Favole.

At the auction, they were unfortunately outbid but are still on the lookout for something classic to call their new home.

From the very first film in 2001, it was evident that Eva had that special star quality. This was recognized by the likes of Will Smith, who was quite happy for her to star alongside him in blockbuster movies.

Here are some of the best highlights of Eva Mendes’ career:

Eva has always played up to her sexy persona, acknowledging that she actually enjoys the attention it brings her. It has also been great for her box office appeal as fans flocked to see her movies.

Eva Mendes knows her mind and is a fiercely independent woman. She knows what she wants and goes out of her way to get it.

Her typical Latin-American temperament is evident in her approach to getting her job done, as she doesn’t suffer fools gladly.

Here are our favorite quotes from Eva Mendes:

Eva is a role model for modern women, in that she embraces her femininity while at the same time being focused and determined to chase down her dreams.

She prides herself on her independence and won’t allow other people to dictate her future.

Now that you know all about Eva Mendes’ net worth, here are some of the best success lessons to learn from Eva Mendes:

Even though Eva is married, she is still incredibly independent. She believes that if anything is to happen, she can take care of herself.

2. Don’t Let What Other People Say Stop You From Doing What You Love

Eva has received loads of criticism throughout her career, but name-calling has never gotten in the way of doing what she wants to do.

3. Feel Comfortable With Yourself

If you can reach a point where you are completely comfortable with yourself, nothing will stop you from achieving your dreams. Eva believes that self-acceptance is the first step in moving forward.

Eva’s career has been incredibly successful from her start as a model to moving from a B-grade actress to becoming one of the most sought-after actors of all time.

She may be known as a sex symbol in the film business, but she’s proven that it’s not the only reason for her success.

Supporting her loving husband and children is her main focus, and she’s not expecting to return to acting any time soon.

But as a role model for women everywhere, Eva shows that if you put your mind to it and don’t let anything slow you down, you can achieve your dreams.

What do you think about Eva Mendes’ net worth? Leave a comment below.