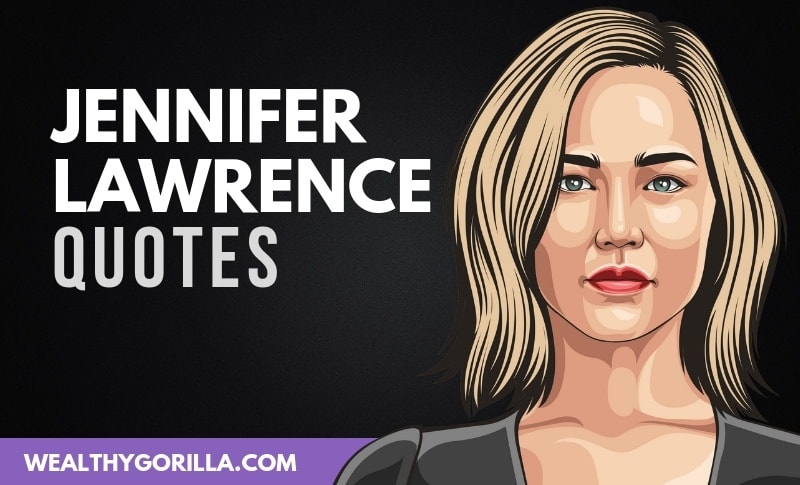 I’ve admired Jennifer Lawrence and her work for a long time now, especially when she portrayed as ‘Katniss Everdeen’ in ‘The Hunger Games’. Lawrence is also very funny as a person, so it’s impossible to not like her.

Here are 32 awesome Jennifer Lawrence quotes about life and fulfillment:

1. “Eating is one of my favorite parts of the day” – Jennifer Lawrence

2. “I do have big ambitions, but I think we all do. I just want to keep working hard and being happy.” – Jennifer Lawrence

3.“You look how you look,” “Be comfortable. What are you going to do? Be hungry every single day to make other people happy? That’s just dumb.” – Jennifer Lawrence

5. “I started to write an apology, but I don’t have anything to say I’m sorry for.” – Jennifer Lawrence

6. “I run into grounded people all the time. Given, most of them are behind the camera. But I definitely by no means think I’m the only one.” – Jennifer Lawrence

7. “I was a Harry Potter nerd. Pencils were wands. I was going to Hogwarts. The whole thing. You don’t understand what a nerd I am. I mean, if they remade them, I’d still go. Like, I’ve seen all of [the originals], and that’s always going to be Harry. That’s always going to be Ron and Hermione. But if they did it again, I absolutely would go, because I want to see it all again.” – Jennifer Lawrence

8.“I’d like to think that I have a plan, but you can’t really pick what scripts you’re going to get or what movie is going to come along.” – Jennifer Lawrence

9. “There’s this freshness that happens within the first few takes of the actors actually listening to each other and actually really reacting.” – Jennifer Lawrence

10. “I think the biggest reason that actors are complete a-holes as soon as they become famous is that they forget that this a job. They think that it’s about them, and it’s not.” – Jennifer Lawrence

11. “I don’t really diet or anything. I’m miserable when I’m dieting and I like the way I look. I’m really sick of all these actresses looking like birds I’d rather look a little chubby on camera and look like a person in real life than looking great on screen and look like a scarecrow in real life.” – Jennifer Lawrence

12. “As soon as somebody farts around me, I think it’s hilarious. This is something my brothers did that now the boys at work are obsessed with. You cup it, and then you throw it in someone’s face and say, ‘Take a bite out of that cheeseburger!’” – Jennifer Lawrence

13. “I learned that you can’t have any expectations with life. You never know what’s going to happen.” – Jennifer Lawrence

14.“It is a sexual violation. It’s disgusting. The law needs to be changed, and we need to change. That’s why these Web sites are responsible. Just the fact that somebody can be sexually exploited and violated and the first thought that crosses somebody’s mind is to make a profit from it. It’s so beyond me. I just can’t imagine being that detached from humanity. I can’t imagine being that thoughtless and careless and so empty inside.” – Jennifer Lawrence

15. “I view the director as my boss. I’m the pawn on the chess board. I don’t say something to the director easily, because they are my boss.” – Jennifer Lawrence

16. “I promise you, anybody given the choice of that kind of money or having to make a phone call to tell your dad that something like that has happened, it’s not worth it.” – Jennifer Lawrence

17. “I’m going to do my thing and if you react a certain way – with pity or with anger – that’s up to you.” – Jennifer Lawrence

18.“If I don’t have anything to do all day, I might not even put my pants on.” – Jennifer Lawrence

19. “Everything that we think comes across in our eyes. Our eyes really are the windows to our souls, and that’s why at least I can tell when somebody doesn’t mean what they’re saying – if you just look at them in the eye.” – Jennifer Lawrence

20. “You have a choice. You don’t have to be a person who spreads negativity and lies for a living. Let’s just make that choice and—it feels better.” – Jennifer Lawrence

21. “I memorize my lines and I show up. I think it’s just instinctual, and sometimes it’s wrong and the director says, “No, do it this way.” And then I can change because I didn’t spend all night practicing it this one way. All I do to get ready for the day is the night before, I read my lines once or twice, memorize them, and then I show up.” – Jennifer Lawrence

22. “If I were just your average 23-year-old girl, and I called the police to say that there were strange men sleeping on my lawn and following me to Starbucks, they would leap into action. But because I am a famous person, well, sorry, ma’am, there’s nothing we can do. It makes no sense.” – Jennifer Lawrence

23. “There are directors that I want to work with and that I admire. You can love a script, but if it doesn’t have a good director, it won’t be that.” – Jennifer Lawrence

24. “It’s just so bizarre how in this world if you have asthma, you take asthma medication. If you have diabetes, you take diabetes medication. But as soon as you have to take medicine for your mind, it’s such a stigma behind it.” – Jennifer Lawrence

25 .“Sometimes if a script is based on a book, that’s what you should do: represent the book.” – Jennifer Lawrence

26. “I really would not call myself a fashion icon.”– Jennifer Lawrence

27.“I was going to come in and push you down the stairs…” – Jennifer Lawrence

28. “I adapt to directors, I don’t like making directors adapt to me. If I’m with Clint Eastwood then I’ll do two takes, if I’m with Fincher I’ll do 50 – though the thought of that sounds horrible.” – Jennifer Lawrence

29. “You look how you look” – Jennifer Lawrence

31.“I was raised to have value for money, to have respect for money, even though you have a lot of it.” – Jennifer Lawrence

32. “What’s so sad is when we’re younger, if you have a bad parent, that is normal to you and that’s what you think of as healthy.” – Jennifer Lawrence

Thanks for checking out this awesome collection of Jennifer Lawrence quotes!

Which are your favorite Jennifer Lawrence quotes? Leave a comment below.