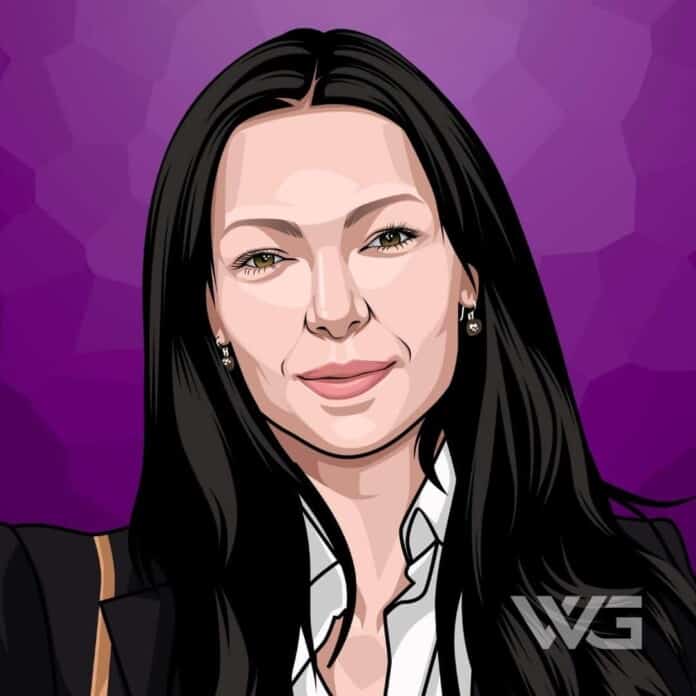 What is Laura Prepon’s net worth?

As of February 2023, Laura Prepon’s net worth is approximately $12 Million.

Laura Prepon is an American actress, director, and author from New Jersey.

She rose to fame with her role as Donna Pinciotti in the Fox sitcom ‘That ’70s Show’. She is also known for her portrayal of Alex Vause in the Netflix comedy-drama series ‘Orange Is the New Black’.

Laura Helene Prepon was born on the 7th of March, 1980, in Watchung, New Jersey, to Marjorie, a high school teacher and Michael Prepon, an orthopedic surgeon.

Prepon, the youngest of five siblings is of Russian Jewish and Irish Catholic descent. Her father passed away in 1993 during heart surgery.

Along with her acting classes, Prepon took ballet and jazz dance lessons. This came in handy when she was selected for the stage productions of ‘A Woman of Property’ and ‘Ascension Day’. Her height fetched her many modeling assignments and she traveled to Paris, Milan, and Brazil for photoshoots.

She made her debut on ‘They Go On’ in 1997, a Levi Strauss-developed soap opera. In 1998, Prepon’s breakthrough role happened when she sent an audition tape for an upcoming Fox sitcom called ‘That ‘70s Show’.

In 2005, Prepon starred in ‘Karla’, the film based on the true event of a deranged couple who abused and murdered three girls. The same year, she was the executive producer of ‘E! Hollywood Hold’em’, a poker television program aired on the E! Television Network.

In February 2011, she was cast in the titular role of Chelsea Newman in the NBC sitcom ‘Are You There, Chelsea?’
Her recent venture has been the role of Alex Vause, an ex-drug dealer, and Piper Chapman’s ex-girlfriend in the Netflix original ‘Orange Is the New Black’, which premiered in July 2013.

Here are some of the best highlights of Laura Prepon’s career:

“I never think of myself as any kind of sex symbol, but I get letters from all over, all sorts. It’s really cool. I get a lot from inmates, which is kind of scary. But the best was the guy who wanted to send me a plane ticket to fly me to his prom.” – Laura Prepon

“Netflix is amazing ’cause they trust the creator to do their job, and they trust us to do our job. They’re really smart and just let us do our thing and deliver a great job.” – Laura Prepon

“They have to be able to spark my interest so I want to pursue it, and they have to have an awesome personality, really laid-back. All those things are sexy to me.” – Laura Prepon

“I used to wear boxers and a tank top, but now I sleep in the nude. It’s kind of weird because I used to have to wear something to bed, whether it was a tank top or whatever. And now if I have any clothes at all on, it’s really hard to get to sleep.” – Laura Prepon

Now that you know all about Laura Prepon’s net worth, and how she achieved success; let’s take a look at some of the lessons we can learn from her:

1. The Mistakes Of Your Youth Will Haunt You For a Lifetime

What you think is a one night stand might turn into a fifteen-month prison stint several years later. Who knows? You don’t. Not yet, you don’t.

2. Cute Girls Will Make You Do Crazy Things

Sometimes, that crazy thing is taking a long stroll in a scenic park at sundown. Sometimes it’s smuggling drug money through customs in Europe. In the heat of the moment, anything is possible. Especially cute girls that look like Laura Prepon.

3. Maintaining Personal Hygiene Is More Fun With a Friend

It also saves water, which is really important for, like, the world. So really, you’re saving the world if you shower with your significant other or your secret drug-smuggling girlfriend. How globally conscious of you.

How much is Laura Prepon worth?

Laura Prepon’s net worth is estimated to be $12 Million.

How old is Laura Prepon?

How tall is Laura Prepon?

Laura Prepon is an American actress best known for her portrayal of Donna Pinciotti, the athletic, a confident and self-righteous feminist who is the love interest of Eric Forman (Topher Grace) in all the eight seasons of the popular Emmy award-winning sitcom ‘That ‘70s Show’.

As of February 2023, Laura Prepon’s net worth is estimated to be $12 Million.

What do you think about Laura Prepon’s net worth? Leave a comment below.