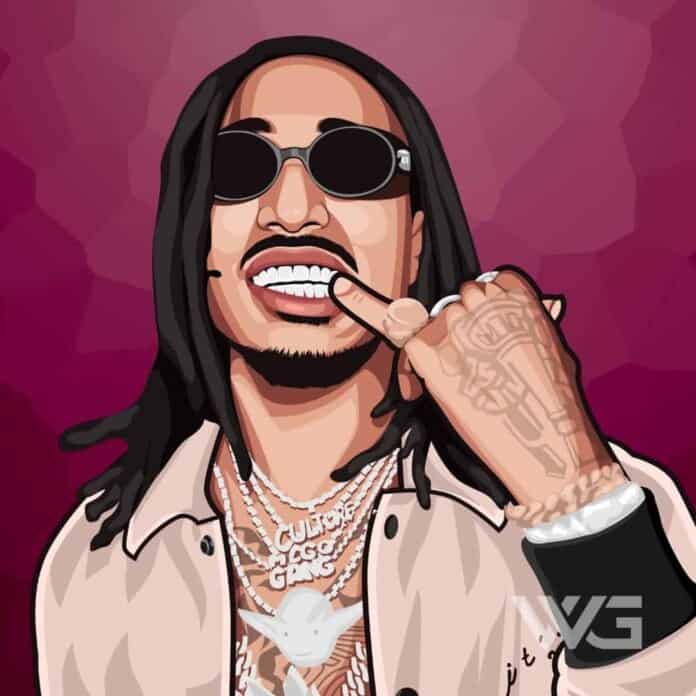 What is Quavo’s net worth?

Quavo is an American rapper, singer, songwriter, and producer.

He is best known for being a member of the music trio Migos. He is related to his fellow Migos members Takeoff and Offset.

Quavo has been featured on a total of four singles that have peaked within the top 10 of the Billboard Hot 100. He has worked with several high-profile artists in the industry, including Big Sean, Travis Scott, Kanye West, and DJ Khaled.

As of January 2023, Quavo’s net worth is estimated to be roughly $26 Million.

Quavious Keyate Marshall was born on the 2nd of April, 1991, in Athens, Georgia.

Migos grew up together in Gwinnett County. Marshall attended Berkmar High School, where he played in the school’s football team.

In 2009, Marshall went 19-of-25 for 201 yards and three touchdowns for the season’s first win. He previously held the record by completing 28 passes in a game back in 2009. Even though he finished the football season for his senior year, he decided to drop out of Berkmar months before graduation.

In 2008, the trio Migos was formed by Quavo and fellow rappers Takeoff and Offset. At first, the group was known as Polo Club, and they eventually decided to change their name to “Migos.” In 2011, they released their first project, a mixtape titled ‘Juug Season.’

Migos rose to fame in 2013 when they released their single ‘Versace.’ The track was later remixed by Canadian rapper Drake and peaked at number 99 on the Billboard Hot 100 chart.

Outside Migos, Quavo has featured on many popular songs, including ‘Congratulations,’ ‘I’m the One,’ ‘Portland,’ and ‘No Brainer.’

In 2017, Quavo featured on The Fate of the Furious: The Album on the song ‘Go Off’ with Travis Scott and Lil Uzi Vert. The track was eventually certified by the RIAA.

The same year, Quavo and Takeoff were busy with their ‘Dab Tour.’ On the 18th of January, he also dropped another mixtape titled ‘Young Rich Niggas 2’. His second album, ‘Culture,’ was also launched in 2017.

How Does Quavo Spend His Money?

Quavo loves spending money as well as looking lavish. He enjoys buying rare and expensive sneakers and streetwear. He also rocks a lot of expensive jewelry. Quavo has one of the biggest jewelry collections amongst other rappers. One of his most interesting purchases is when he bought a cat.

Like many other rappers, Quavo is a big fan of lavish cars. In his car collection, we can see cars including a Dodge Challenger SRT Hellcat, a Jeep Rubicon, a Mercedes Benz AMG GLE, a Rolls Royce Cullinan, and a Mclaren 720S.

Quavo has bought many properties around Georgia for himself and his family members. It’s estimated that he has spent a few million dollars on real estate within the three years.

Here are some of the best highlights of Quavo’s career:

“We feel like history repeats itself. You ain’t never going to see nothing brand new; you’re only going to see when records are broken. And we’re here just to set records and set trends and follow the footsteps that have been shown to us.” – Quavo

“I ain’t going to sit here like, ‘My neighborhood was hard, and I had to get out there and grind.’ We made it hard for ourselves. We chose to stay on the streets.” – Quavo

“We need the world to respect us. They consume a lot of hits and act like it wasn’t… I ain’t never seen nobody make these many hits and not get notified for it. And change the game as we did and bring the flow to the game the way we did and not get noticed for it, like the big way – the real system way.” – Quavo

“Our quarterbacks were getting hurt; a couple got kicked out of school. The coach asked who wanted to try out for QB. From there on, I was a quarterback. I was ineligible in 10th grade until spring, so I did baseball. I started in left field and pitched.” – Quavo

“The plan is to make money, and we know the fans are going to ask for mixtapes, and those mixtapes are going to hit. So when we put a tape out, we have more money coming in, that’s why we work hard at it.” – Quavo

“If you want the Migos to come to your venue, you need to have security there because of the type of music we’re rappin’. We get fans excited.” – Quavo

Now that you know all about Quavo’s net worth and how he achieved success; let’s take a look at some of the best lessons we can learn from him:

You gotta give everybody a new trend, a new wave, something new to do.

When you do it yourself, you feel better; do it.

How much is Quavo worth?

Quavo’s net worth is estimated to be $26 Million.

How old is Quavo?

How tall is Quavo?

Quavo is a well-established rapper who is best known for being a hip-hop trio Migos.

He released his debut solo album in 2018, which was a huge success, and since then, he has become one of the greatest rappers in the industry. Between 2017 and 2018, Migos earned $25 million. They are one of the most-streamed groups on the planet with 4 billion streams.

As of January 2023, Quavo’s net worth is estimated to be roughly $26 Million.

What do you think about Quavo’s net worth? Leave a comment below.