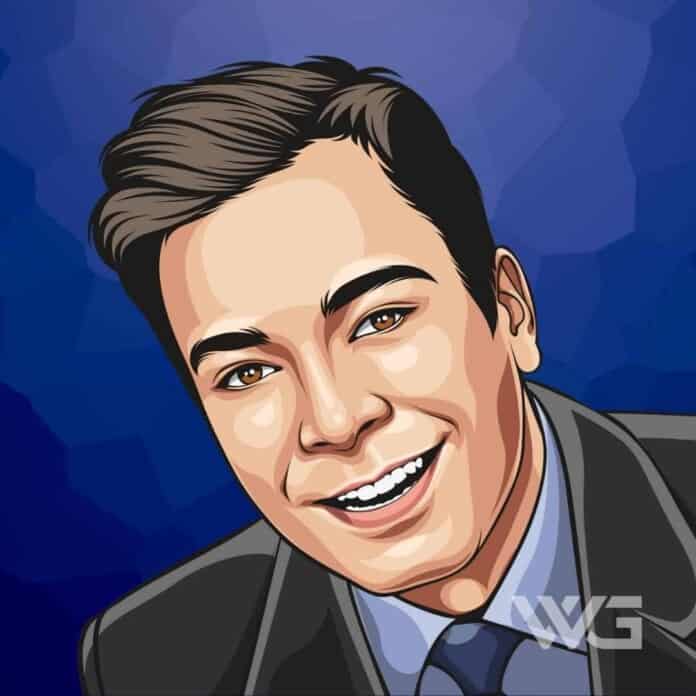 What is Jimmy Fallon’s net worth?

James “Jimmy” Fallon is an American comedian, actor, television host, singer, writer, and producer from Brooklyn. Fallon is best known for his work in television as a cast member on Saturday Night Live.

He is also best known as the host of late-night talk show The Tonight Show Starring Jimmy Fallon.

James Thomas “Jimmy” Fallon was born on the 19th of September, 1974, in Brooklyn, New York. Fallon is the son of James W. Fallon and Gloria. He has an elder sister, Gloria.

Fallon began his stand-up career when he started to impersonating various celebrities and started performing stand-up tours around the country. He appeared on the show, ‘Spin City’, in 1998 and was then asked to audition for the long-running late night sketch comedy show, ‘Saturday Night Live’.

It was during the auditions he impersonated a number of personalities including Jerry Seinfeld, Hilary Swank, Eddie Murphy, and Adam Sandler. He was finally cast in his dream job with ‘Saturday Night Live’ in 1998.

After two years, he ventured into films with ‘Almost Famous’ as Dennis Hope. The same year, he also released the comedy album, ‘The Bathroom Wall’, which was rated as a great ‘parody’ album and was even nominated for prestigious awards.

In 2005, he hosted the MTV Movie Awards and even played Anakin Skywalker in the comedic parody of a ‘Star Wars’ episode.

In 2006, he was cast in ‘Spontaneous Combustion’ a television commercial with Parker Posey and also starred in ‘Doogal’.

His very own television show, ‘Late Night with Jimmy Fallon’ was aired in 2009 and is running successfully till date.
In 2010, he hosted the 62nd Primetime Emmy Awards.

In February 2014, Jimmy Fallon made his debut on the “Tonight Show” on NBC and the show attracted around 11.3 million viewers.

Here are some of the best highlights of Jimmy Fallon’s career:

“New Scientist magazine reported that in the future, cars could be powered by hazelnuts. That’s encouraging, considering an eight-ounce jar of hazelnuts costs about nine dollars. Yeah, I’ve got an idea for a car that runs on bald eagle heads and Faberge eggs.” – Jimmy Fallon

“Arnold Schwarzenegger’s publicist told USA Today that the actor has not ruled out running for governor of California, saying that he will make a decision soon. Reportedly Arnold needs that time to learn how to pronounce ‘gubernatorial.’” – Jimmy Fallon

“You can’t reinvent the wheel. I remember when we first started out at ‘Late Night,’ we were trying to hire directors, and this guy was like, ‘I see you behind a glass desk.’ I don’t. And he’s like, ‘Yeah, the glass desk.’ I go, ‘I don’t really see me as a glass desk guy.” – Jimmy Fallon

Now that you know all about Jimmy Fallon’s net worth, and how he achieved success; let’s take a look at some of the best lessons we can learn from him about marketing:

Make the audience feel like they are in on the joke.

2. Don’t Be Afraid to Be Silly

Millennials appreciate brands that don’t put themselves on a pedestal. Never be afraid to be silly.

When millennials see their favorite celebrities laughing and playing with others, it makes them seem more relatable. This same concept holds true for brands aiming to create a comedic campaign geared toward millennials.

How much is Jimmy Fallon worth?

Jimmy Fallon’s net worth is estimated to be $60 Million.

How old is Jimmy Fallon?

How tall is Jimmy Fallon?

Jimmy Fallon is best known for his late-night talk show ‘Late Night with Jimmy Fallon’, an award-winning talk show on NBC is currently one of the highest-rated shows in the ‘Late Night’ franchise and is even more popular among the ladies because of his dapper-good looks and his impeccable comic timing.

As of February 2023, Jimmy Fallon’s net worth is approximately $60 Million.

What do you think about Jimmy Fallon’s net worth? Leave a comment below.

B.J. Penn is a master of Brazilian jiu-jitsu that became an icon in the UFC, and his mainstream appeal has made him one of the richest mixed martial artists in the world.