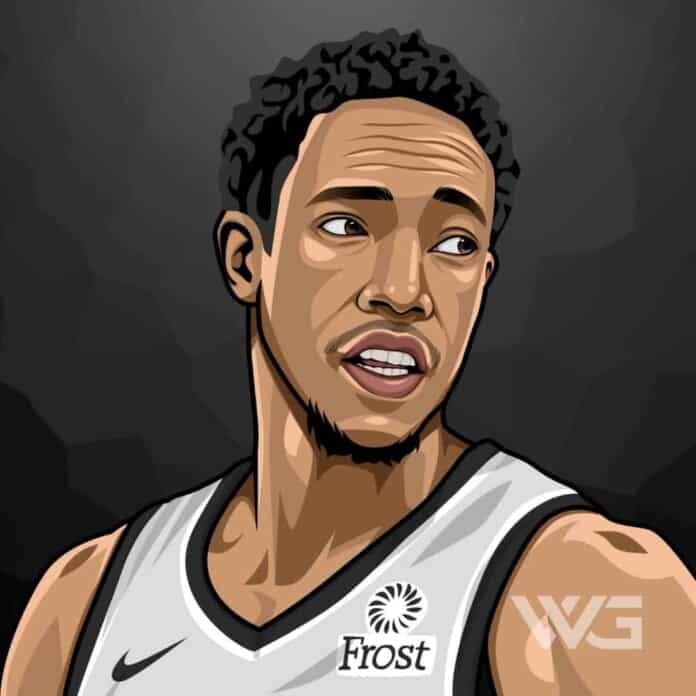 What is DeMar DeRozan’s net worth?

DeMar DeRozan is an American professional basketball player for the San Antonio Spurs of the NBA.

DeRozan was selected ninth overall by the Toronto Raptors in the 2009 NBA draft. He is a four-time NBA All-Star and a two-time All-NBA Team member.

As of November 2022, DeMar DeRozan’s net worth is roughly $80 Million.

DeMar Darnell DeRozan was born on the 7th of August, 1989, in Compton, California.

DeRozan is the son of Frank and Diane DeRozan. He has an elder half-brother, Jermaine.

He studied at ‘Compton High School.’ With his father’s training, he quickly became a promising basketball talent. When he reached the 9th grade, other Compton schools tried to get him on their roster, but he continued with his school.

DeRozan chose to give up his 3 years of eligibility at the USC and in April 2009, he decided to enter the ‘2009 NBA Draft.’ He was selected 9th overall by the ‘Toronto Raptors’ in June 2009.

He was selected for ‘Sprite Slam Dunk ‘competition in the 2010 and 2011 seasons, but he did not achieve the top place.

In 2014, his scores reached a high at 40 points against ‘Dallas Mavericks.’

He was selected for the ‘2014 NBA All-Star Game’ as a reserve guard for the ‘Eastern Conference All-Star Team.

In the 2013-2014 season the ‘Toronto Raptors,’ assisted by DeRozan, achieved third seed in ‘Eastern Conference’ with a 48-34 record. During the playoffs, he became the first ‘Raptors’ to score 30 points in each of the back-to-back playoff games.

In January 2018, he set a franchise record by scoring 52 points in a single game. For the second successive season, in January 2018, he was named as an ‘NBA All-Star’ starter, which became his fourth overall selection to the game.

Here are some of the best highlights of DeMar DeRozan career:

“I told myself that if I went to Compton High, and I made something out of the school, it would mean something to me later down the line because I started everything. And future kids would say, ‘DeMar made it here; why can’t I?’ I wanted to stay home.” – DeMar DeRozan

“Day 1, when I was drafted to the Toronto Raptors, they had this stigma on them: Every guy leaves. Nobody wants to be here. Superstars, nobody wants to play in Canada. From Day 1, my whole mindset and approach to the game, being in Toronto, was I wanted to change that whole narrative to that whole organization.” – DeMar DeRozan

“I played against Kobe a lot when I was in high school during the summers, even in college, just being that guy in L.A. coming up. He always gave me advice here and there, and even the smallest things stuck with me. I watched every single thing that Kobe did, every game, every move. He made me a student of the game.” – DeMar DeRozan

Now that you know all about DeMar DeRozan’s net worth, and how he achieved success; let’s take a look at some of the lessons we can learn from him:

When you have a dream, you’ve got to grab it and never let go.

No matter what you’re going through, there’s a light at the end of the tunnel.

How much is DeMar DeRozan worth?

DeMar DeRozan’s net worth is estimated to be $80 Million.

How old is DeMar DeRozan?

How tall is DeMar DeRozan?

DeMar DeRozan is an American professional basketball player, who was a member of the US national team during the ‘2014 World Cup’ and the 2016 Olympics.

DeRozan was named four times to the ‘NBA All-Star Team’ and twice he was a member of the ‘All-NBA Team.’

What do you think about DeMar DeRozan’s net worth? Leave a comment below.