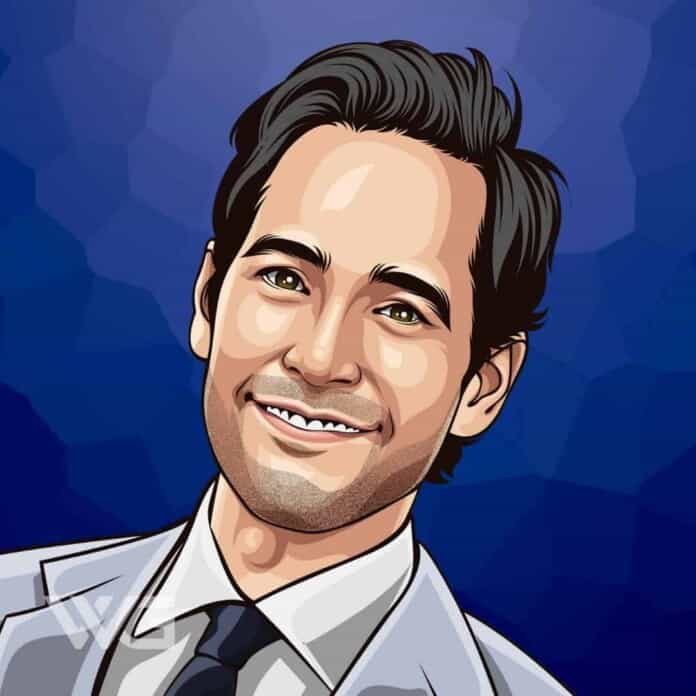 What is Paul Rudd’s net worth?

As of November 2022, Paul Rudd’s net worth is approximately $70 Million.

Paul Rudd is a famous American Actor who has been in the industry for over two decades. Having begun his acting career at a relatively young age, he has been able to make numerous appearances on several television shows and films.

He is one of the now mainstream actors and has gotten to work with some of the most prominent actors in the world.

Having grown up in a household with two Jewish parents, Paul had a traditional Jewish bar mitzvah.

When he was quite young, his family relocated to Lenexa, Kansas and there he attended Broadmoor Junior High and Shawnee Mission West and later the went to the University of Kansas for about two years.

He also went to the British Drama Academy to further pursue acting, and he even participated in theatre productions.

In 1995, Paul Rudd delivered memorable performances in the two films that really put him on the map, ‘Clueless’ and ‘Halloween: The Curse of Michael Myers.’ The following year he appeared in ‘The Size of Watermelons’ and the TV version of ‘Clueless.’

In 1999 his performance in ‘The Cider House Rules’ got him a nomination for a Screen Actors Guild Award.

In the early 2000’s he appeared on ‘Strangers with Candy’, ‘Friends’, ‘Anchorman: The Legend Of Ron Burgundy’, ‘The 40-Year-Old Virgin’, ‘Monsters vs. Aliens’, and many more.

In 2012 he produced and acted in the movie ‘Wanderlust.’

Paul Rudd has worked with many famous actors throughout his career, including Michael Douglas, Will Ferrell, Seth Rogen, and Robert Downey Jr.

Here are some of the best highlights of Paul Rudd’s career:

“Acting, in general, you just feel kind of stupid doing it anyway, but when you’re pretending to be rolling around and dodging a foot or riding an ant, you’re having to really do it seriously, and there’s nothing there. You’ve got to put faith in the process.” – Paul Rudd

“I’m sure that my wanting to be an actor had to do with a need for approval.” – Paul Rudd

3 Rules for Success from Paul Rudd

Now that you know all about Paul Rudd’s net worth, and how he achieved success; let’s take a look at some of the lessons you can learn from him:

Humor is something that can drastically improve someone’s mood and perspective when they are under a lot of pressure or bad circumstances. It can make people set their problems aside and have a good time.

A lot of times it’s easy for people just to throw in the towel and give up when something isn’t working out. But we should all be able to push forward and persevere because eventually, everything will fall into place.

3. Do things for yourself.

You don’t need anyone’s approval on how you should be living your life because you are in control and you need to do what makes you happy and comfortable with yourself.

How much is Paul Rudd worth?

Paul Rudd’s net worth is estimated to be $70 Million.

How old is Paul Rudd?

How tall is Paul Rudd?

Paul Rudd is one of the most famous actors at the moment and for a good reason. He has worked in numerous films and television shows with some of Hollywood’s most well-known celebrities.

As of November 2022, Paul Rudd’s net worth is approximately $70 Million.

What do you think about Paul Rudd’s net worth? Leave a comment below.