The one and only Jackie Chan;

Known for his incredible martial arts skills using in all the popular action movies he’s starred in over the years. Although it sounds like that’s not the direction he wants to continue moving in, according to some of these quotes below.

Chan was named the 2nd highest paid actor of 2016, and we’ve put together this awesome collection of Jackie Chan quotes to celebrate:

Here are 30 legendary quotes from the man himself:

1. “Cinema reflects culture and there is no harm in adapting technology, but not at the cost of losing your originality.” – Jackie Chan

3. “Now I am older, I understand we have to accept who we are.” – Jackie Chan

4. “Coffee is a language in itself.” – Jackie Chan

5. “In the past when I was in Hollywood, I was like a dog. I felt humiliated. My English was not good. People would even ask me ‘Jackie Who?’.” – Jackie Chan

6. “Don’t try to be like Jackie. There is only one Jackie. Study computers instead.” – Jackie Chan

7. “I now have two different audiences. There’s the one that has been watching my action films for 20 years, and the American family audience. American jokes, less fighting.” – Jackie Chan

8. “I will make action movies, I think, for a few more years, another five years.” – Jackie Chan

11. “I’m tired of fighting. I’ve always known that I can’t be an action star all my life.” – Jackie Chan

14. “I feel like I have lived all over the world since I get to go everywhere to film.” – Jackie Chan

15. “My affection for Taiwan… is witnessed by everyone. My wife is Taiwanese and I am a son-in-law of Taiwan. I am half Taiwanese.” – Jackie Chan

16. “American stuntmen are smart – they think about safety. When they do a jump in a car, they calculate everything: the speed, the distance… But in Hong Kong, we don’t know how to count. Everything we do is a guess. If you’ve got the guts, you do it. All of my stuntmen have gotten hurt.” – Jackie Chan

17. “My schedule goes: wake up, running, exercise, downstairs, running shoes off, then to the shower. That’s the Jackie Chan diary.” – Jackie Chan

18. “Anyone can be a Superman, but nobody can be Jackie Chan.” – Jackie Chan

19. “For me the greatest source of income is still movies. Nothing – stocks, financial speculation, real estate speculation or businesses – makes more money for me than making movies.” – Jackie Chan 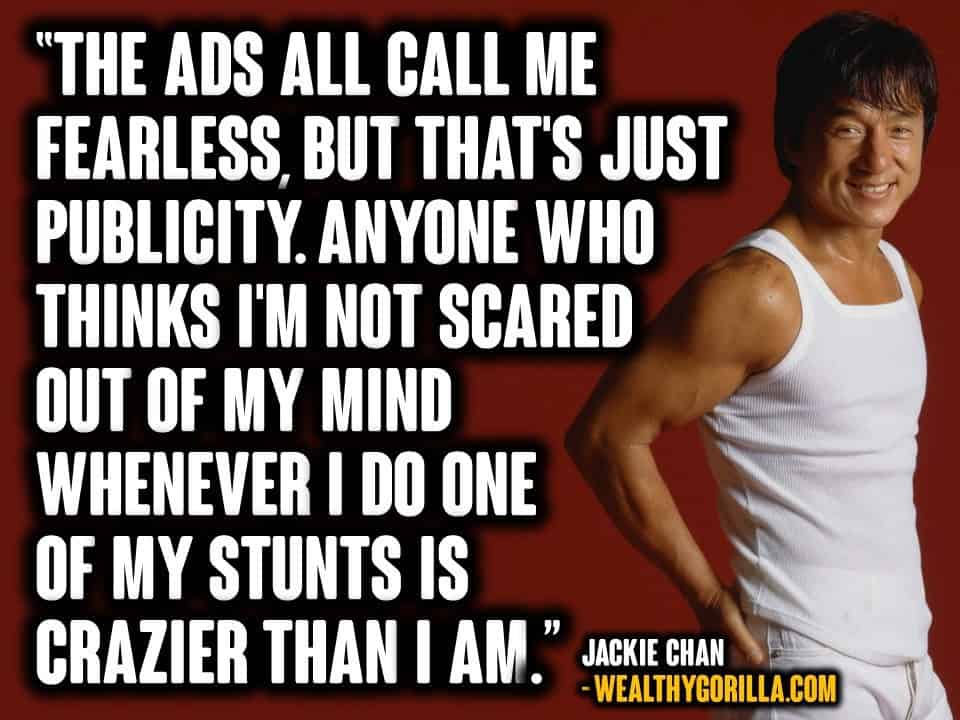 20. “The ads all call me fearless, but that’s just publicity. Anyone who thinks I’m not scared out of my mind whenever I do one of my stunts is crazier than I am.” – Jackie Chan

21. “Since the child knew his parents would give in, he tried the same trick again and again.” – Jackie Chan

22. “I like to change characters and then, slowly I believe the audience treat me as, like an actor who can fight. It’s not like an action star.” – Jackie Chan

23. “After all those years in Asia, I don’t have to do promotion anymore. We just release a Jackie Chan movie and – Boom! – people go.” – Jackie Chan

24. “Speaking English is like tongue-twist for me. I can speak each word perfect, but then you have to string them together like, ‘Blah, blah, blah.’ That’s when I get crazy.” – Jackie Chan

26. “I know I have to run 20 more minutes if I eat ice cream. Basically, I eat everything, but I just do more training.” – Jackie Chan

27. “Most of the time, I’m not even working; I’m just helping people, because I feel that I am too lucky.” – Jackie Chan

28. “When I got depressed, I watched Bruce Lee movies. I learned everything from Bruce Lee.” – Jackie Chan

30. “When I was young I didn’t care about education, just money and box office.” – Jackie Chan

Thanks for viewing this collection of the best Jackie Chan quotes! Don’t forget to share them on social media.

Which are your favorite Jackie Chan quotes? Leave a comment below.