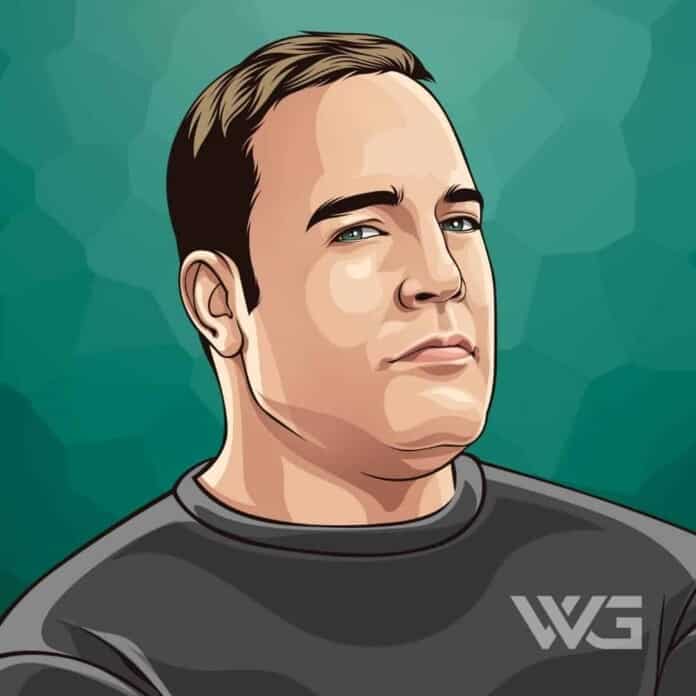 What is Kevin James’ net worth?

Kevin James is an American actor and comedian from Mineola. James is mostly known for his roles as Doug Heffernan on the CBS sitcom ‘The King of Queens’.

He is also known for the movies such as ‘Paul Blart: Mall Cop’, ‘Grown Ups’, ‘Zookeeper’, ‘Pixels’ and ‘Sandy Wexler’. The talented comedian has received several nominations and awards for his performance in his films.

Kevin James was born in Mineola, New York on the 26th of April, 1965. James is the second son of Janet and Joseph Valentine Knipfing. His mother worked in a chiropractor’s office while his father owned an insurance agency.

James attended Ward Melville School in 1983, and he used to play football and also participated in wrestling matches. He went to the State University of New York. However, he quit before graduation.

Kevin James got the opportunity to perform a solo stand-up act at the club in 1989 which was a big success. James was later invited to perform in the club regularly.

He hosted ‘SandBlast’ in 1994 which aired for two seasons till 1996. James had his first television debut in 1996 when he starred in the hit sitcom ‘Everybody Loves Raymond’.

James big breakthrough came in 1998 when he was chosen to star as the main lead ‘Doug Heffernan’ in the CBS sitcom ‘The King of Queens’. His incredible portrayal endeared him to the audience and made him very popular.

In 2006, James served as the voice actor in ‘Monster House’, ‘Barnyard’ and ‘Emperor’s New School’. He also featured in the comedy movie ‘Grilled’ with his friend Ray Romano.

Since then, James co-wrote and starred as the title character in the comedy ‘Paul Blart: Mall Cop’ in 2009. Two years later he co-produced the comedy film ‘Zookeeper’ in which he also starred as one of the main characters.

He has appeared in the buddy comedy ‘Grown Ups’ and its sequel ‘Grown Ups 2’ alongside Adam Sandler, Chris Rock, David Spade, and Salma Hayek. The movie performed very well at the box office and was a commercial success.
As of December 2022, Kevin James’ net worth is $100 Million.

Here are some of the best highlights of Kevin James’ career:

“Nowadays, a lot of people steal. Some of the people steal feelings, break others people hearts and lives, some of the people steal physical stuff such as cars, bags, wallets, and houses but are those people the only types of offenders in the world?! The answer is no, they aren’t. There is another type that is growing day by day and this type is represented by hackers.” – Kevin James

“Hackers are persons who are passionate and attracted by knowing everything in detail about the cybernetic systems, especially computer systems. Despite the conception that hackers are persons with evil intentions that want to run the world someday by their own conceptions, their passion for details and understanding them most of the hackers have a professional goal and they don’t use their knowledge to seek and exploit a weakness in a computer system.” – Kevin James

“You know, when you’re a fat guy you don’t need a reason to sweat. Guys come up to me and go “Jeez… what have you been doing – jumping rope in the attic or something?”…”Umm, no… I peeled an orange about an hour ago, why?” – Kevin James

“How big are muffins going to get before we all join hands across America? Have you seen them? They’re huge. “Yeah, I’ll take a coffee and… Oh, my God! Yeah, I’ll have the beanbag chair with raisins.” – Kevin James

“I discovered I scream the same way whether I’m about to be devoured by a Great White or if a piece of seaweed touches my foot.” – Kevin James

“I had many teachers that were great, positive role models, and taught me to be a good person and stand up and be a good man. A lot of the principals they taught me still affect how I act sometimes and it’s 30 years later.” – Kevin James

How much is Kevin James worth?

Kevin James’ net worth is estimated to be $100 Million.

How old is Kevin James?

How tall is Kevin James?

Kevin James net worth has increased throughout his career as a phenomenal actor and comedian. James has become a household name with his roles in ”Paul Blart: Mall Cop’, ‘Grown Ups’ and ‘The Dilemma’.

Kevin James has built a phenomenal high net worth throughout his career estimated to be $100 Million.

What do you think about Kevin James’ net worth? Leave a comment below.